Cheetos and Bad Bunny Continue to Uplift the Hispanic Community Ahead of School Year with the Launch of the Deja tu Huella Estudiante Fund to Provide Students with $500,000

PLANO, Texas, July 22, 2021 /PRNewswire/ -- What happens when you mix a Bad Bunny with a Mischievous Cheetah? The hottest capsule collab of the year. 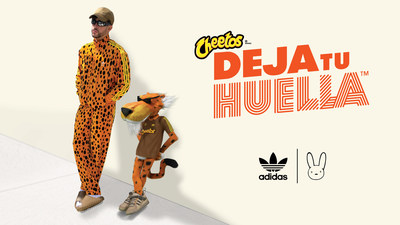 When Cheetos® and global music superstar Bad Bunny first introduced the Deja tu Huella™ campaign in 2020 to celebrate the impact that Hispanic culture has made on today's society, they set out on a mission to inspire the next generation to Deja tu Huella, a phrase that translates to "leave your mark." Since last year, that rally cry has only grown stronger.

As the campaign enters its second phase, Chester Cheetah and Bad Bunny are teaming up once again to spotlight the Hispanic community by bringing fans two exciting experiences ahead of the school year that take Deja tu Huella to the next level: an exclusive fashion collaboration with adidas and the Deja tu Huella Estudiante Fund, a contest that will give $500,000 in total prizing to students in the U.S. and Puerto Rico.

"It's an honor to give back to the Hispanic community that has done so much for me," said Bad Bunny. "Between music and fashion, there are so many ways to leave your mark on culture, and I want to encourage everyone to follow whatever path inspires them. That's what the Deja tu Huella program is all about."

In true mischievous fashion, Cheetos is giving its biggest fans the chance to get early access to the exclusive items before they're officially available for purchase on August 6. Fans simply need one thing for the opportunity to cop the drop before anyone else: fingertips covered in Cheetos orange-dust, also known as Cheetle®, which all true Cheetos fans now don as a badge of honor.

How to use Cheetle iD to unlock early access to the exclusive collection:

As part of the Deja tu Huella campaign and in partnership with Good Bunny Foundation, Cheetos and Bad Bunny are also welcoming submissions starting today for the Deja tu Huella Estudiante Fund, a contest that will identify ten students leaving their mark on their community and reward them with $50,000 each that can go towards their education.

To enter the #DejatuHuella TikTok Hashtag Challenge, fans in the U.S. and Puerto Rico can submit a :60 video that shows how they are leaving their mark on the community, the culture, or the world, and tag @Cheetos, #DejatuHuella, and #Entry to be eligible.  For more information on how to enter and full rules, visit www.cheetos.com/dejatuhuella. Submissions can be made now through August 18, and winners will be announced by the end of 2021.

"We've seen how our fans have left their mark on the world and recognize the influence the Hispanic community has had on mainstream culture," said Jessica Spaulding, senior director of marketing, Frito-Lay North America. "Cheetos has long been a brand that celebrates all forms of self-expression, so we're proud to team up once again with an icon like Bad Bunny to help the next generation Deja tu Huella through the launch of the Estudiante Fund and fashion collab with adidas."

In addition to the Deja tu Huella Estudiante Fund, the Cheetos brand's parent company PepsiCo has pledged $275 million to the Hispanic and Latinx community. For more information, visit www.cheetos.com/dejatuhuella and follow @Cheetos on social media.

Cheetos is one of the many brands that make up Frito-Lay North America, the $18 billion convenient foods division of PepsiCo, Inc. (Nasdaq: PEP), which is headquartered in Purchase, NY. Learn more about Frito-Lay at the corporate website, http://www.fritolay.com/, the Snack Chat blog, http://www.snacks.com/ and on Twitter http://www.twitter.com/fritolay.

PepsiCo products are enjoyed by consumers more than one billion times a day in more than 200 countries and territories around the world. PepsiCo generated more than $70 billion in net revenue in 2020, driven by a complementary food and beverage portfolio that includes Frito-Lay, Gatorade, Pepsi-Cola, Quaker, Tropicana and SodaStream. PepsiCo's product portfolio includes a wide range of enjoyable foods and beverages, including 23 brands that generate more than $1 billion each in estimated annual retail sales.

Guiding PepsiCo is our vision to Be the Global Leader in Convenient Foods and Beverages by Winning with Purpose. "Winning with Purpose" reflects our ambition to win sustainably in the marketplace and embed purpose into all aspects of our business strategy and brands. For more information, visit www.pepsico.com

Bad Bunny is a multi-platinum recording artist, multiple Latin GRAMMY and GRAMMY winner, who consistently manages to break international barriers and dismantle cultural norms, becoming a global icon of culture and entertainment. In 2020, he was named "Composer of the Year" by ASCAP. Bad Bunny became the first male reggaeton artist to appear on the cover of Rolling Stone magazine and the only male Latin artist to grace the cover of The New York Times Magazine. With his unparalleled impact on massive audiences, this year Bad Bunny was proclaimed the biggest pop star in the world by Bloomberg.

This year, the artist quickly sold out tickets to his upcoming tour, "El Último Tour del Mundo 2022," and made history by achieving the best-performing sales days on Ticketmaster for any tour since 2018. He continued to break records with his latest single, "Yonaguni," which marked the biggest streaming debut for a Spanish song on Spotify, ranking #3 on the global "Top 200." The song amassed more than 20 million combined streams across digital platforms on its first day of release alone.

His most recent album, "El Último Tour del Mundo" debuted at #1 on the Billboard 200, becoming the first album entirely in Spanish to reach said position in the 64-year history of the all-genre chart. The artist has had his entire discography on the Billboard 200, with his last four albums in the Top 10 and his first album, "X100PRE" at #11. He closed 2020 as the #1 global artist on Spotify, and Billboard's #1 Latin artist for the second consecutive year. Bad Bunny is one of the Latin artists with the most entries on the global "Hot 100" chart, with a total of 38 hits on the chart.