Just Math Simply put, a stock split is exactly what it sounds like. One share gets divided, or split, into multiple shares. Don’t worry, though. The value of your holdings is the same, just in smaller chunks.

Similarly, in a stock split, it is very important to remember that the price of the share also is reduced. For example, if a company board announces a 2-for-1 split, then you get one extra share for each share you own--but the share price will be halved. In this example of a 2-for-1 split, if you had one share of Company X at $10 per share, you now have two shares of Company X at $5 per share.

This does not mean that the stock has become cheaper. The fundamentals of the company and the stock price have not changed. Sticking with the dark chocolate bar analogy, after breaking the bar into smaller bits, you have smaller bits of dark chocolate, not more chocolate overall.

Is This New? For Apple, not really.

For Tesla, yes, this is the first time the company has split its stock.

But Why? Why do companies announce stock splits?

Stock splits are a way for companies to increase their overall liquidity.

Liquidity means the ease with which investors can buy or sell shares on a stock exchange. The smaller the dollar amount of each share, the smaller number of shares are needed by even the smallest investor to buy or sell that stock.

In most cases, stock splits are undertaken by companies when the share price has gone up significantly, particularly in relation to a company’s stock market peers. If the share price becomes more affordable for smaller investors, it can reasonably be assumed that more investors will participate, and so the overall liquidity of the stock would increase as well.

But remember this with stock splits: Though the number of outstanding shares changes, and though the price of each share changes, the company's overall market capitalization stays the same. The value of the company doesn’t increase when a split occurs, therefore the value of your stocks, your shares, doesn’t change, either.

Take Tesla for example. Before the stock split, Tesla shares traded at around $1,500 per share. Many people might not have been able to invest in Tesla because they did not have $1,500 to invest in one share in the company. (True story for me!) After the 5-for-1 split, the stock price will drop to around $300 per share, which is a lot more manageable for many more investors.

This is especially true now with more and more investors having access to low-cost trading platforms. Buying and selling stocks is now easier than ever, and for many investors these recent splits might be an entry point into companies they have long admired.

All this being said, these recent high-profile splits seem superfluous given that most brokerage platforms now enable trading in fractional shares. Perhaps the psychology of owning at least one whole share is at play in the companies’ decisions.

But additional participation by smaller investors could also lead to the price increasing, which we saw in the prices of both Apple and Tesla immediately after the stock split announcement.

“When we look at a company like Apple and strictly observe the value of an investment immediately after a stock split, there really isn’t a discernable pattern in the change in wealth. What is noticeable is the trading volume of the stock which might be attributed to news flow. All this said, for long-term investors in a stock, a stock split (or reverse split) really doesn’t affect the fundamental value of the company or the wealth in your pocket,” points out Morningstar Canada’s Director of Investment Research Ian Tam.

Here’s what happened to Apple after each of its splits: 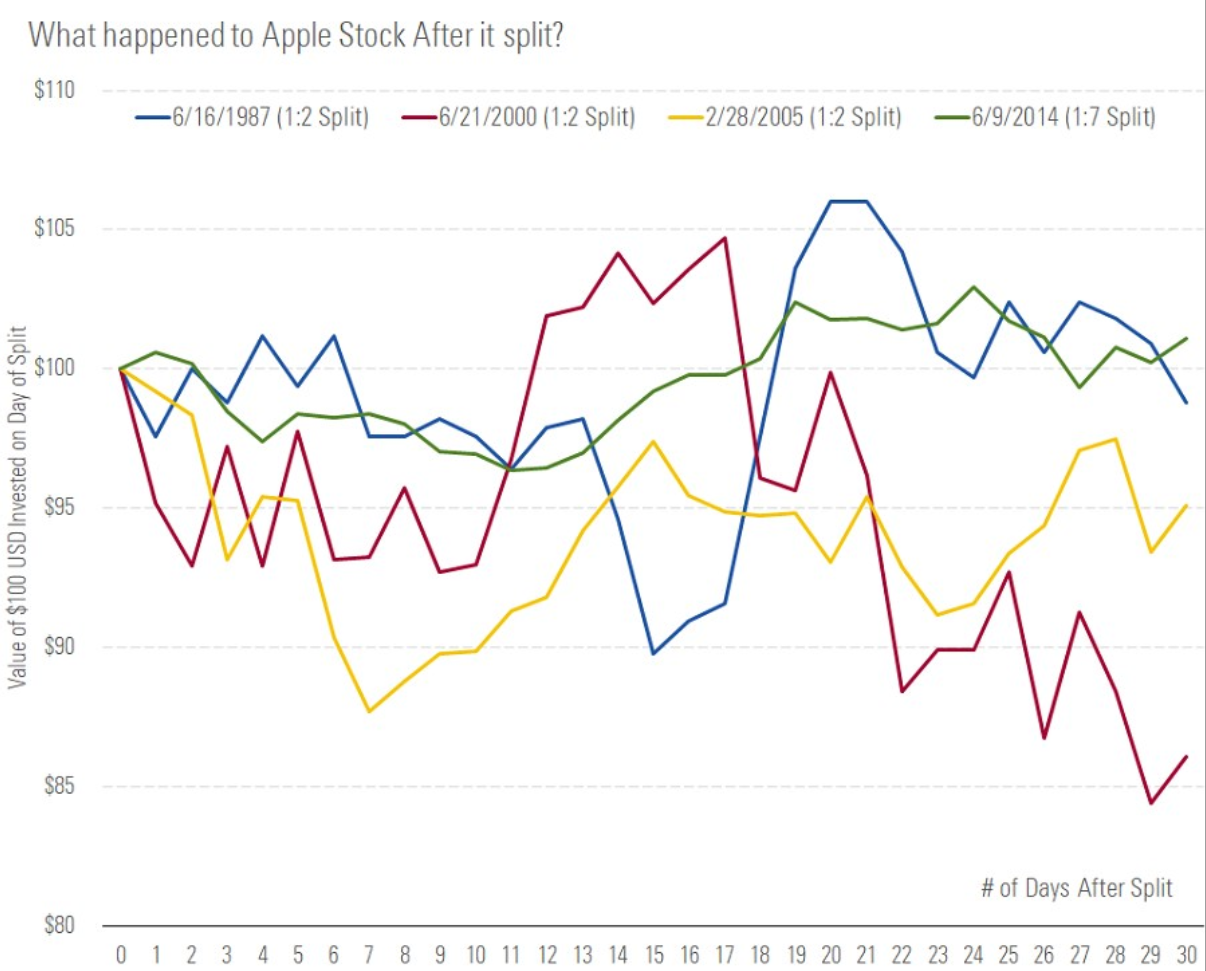 Does the Company Change? Not at all. Stock splits do not alter the fundamentals of the company in any way, apart from the short-term price increases we described earlier. There’s no harm done in this regard if the stock doesn’t split either.

Tesla and Apple were not even the highest-priced stocks in the market. That distinction goes to Berkshire Hathaway (BRK.A), which is trading at around a whopping $318,000 per share. Another stock with a high price is the Swiss maker of Lindt chocolate, Chocoladefabriken Lindt & Spruengli, which trades at over CHF 7,500 per share (over $8,000) on the London Stock Exchange.

Among the FAANG stocks, of which Apple is a part, Amazon (AMZN) is the highest priced, at $3,200. The others are Alphabet (GOOG) at $1,500 per share; Netflix (NFLX) at $480 per share; and the lowest priced is Facebook (FB) at $260 per share. The Upside Down The opposite of a stock split is a reverse stock split.

In the case of reverse stock splits, the company divides the number of shares that investors own, rather than multiplying them. As a result, the price of the shares increases.

You may think that reverse stock splits are bad news for the company, but this is not always the case. One of the most famous examples of reverse stock splits is Citigroup (C). Its share price declined to under $10 during the 2008 global financial crisis and stayed there, so in 2011 the Citigroup board decided to do a reverse split of 1-for-10. The split took the price from $4.50 per share to $45 per share. The company--and the stock--survived and is now trading at around $52 per share.

More recently, with the collapse of oil prices, we saw the large United States Oil Fund (USO) do an 8-to-1 reverse split when it fell to around $2 per share. Holders of eight shares before the split would have been looking for their one share to be $16 on the other end. They’re now around $30 each. See, just math!

Ruth Saldanha does not own (actual or beneficial) shares in any of the securities mentioned above. Find out about Morningstar’s editorial policies.