We expect the COVID-19 treatment landscape to evolve rapidly in 2020, with solid innovation supporting drug company pipelines and moats. This support is less through direct sales of coronavirus vaccines and treatments and more through expected reduced efforts to lower drug pricing at the potential expense of innovation.

The dominance of Gilead’s (GILD) antiviral remdesivir in mid-2020 should shift to potential wide combination use with repurposed immunology drugs (including steroid dexamethasone, which recently showed a marked survival benefit in critically ill patients) in the third quarter, emergency use of some new vaccines and targeted antibodies in the fourth quarter, and approval of several antibodies and vaccines by the end of 2020. We expect data by the end of the year showing whether oral antiviral combinations with Pfizer’s (PFE) protease inhibitor or Merck (MRK) and Ridgeback Biotherapeutics' EIDD-2801 improve on remdesivir alone.

Overall, we expect multiple approved vaccines by early 2021, with wide vaccination in developed markets by mid-2021. New vaccines are moving into trials and progressing into phase 3 more quickly than we anticipated.

Three National Institutes of Health-sponsored phase 3 trials (likely around 30,000 patients each) are poised to start soon: Moderna (MRNA) in July, AstraZeneca (AZN) in August, and Johnson & Johnson (JNJ) in September, according to a Wall Street Journal report based on conversations with NIH officials. 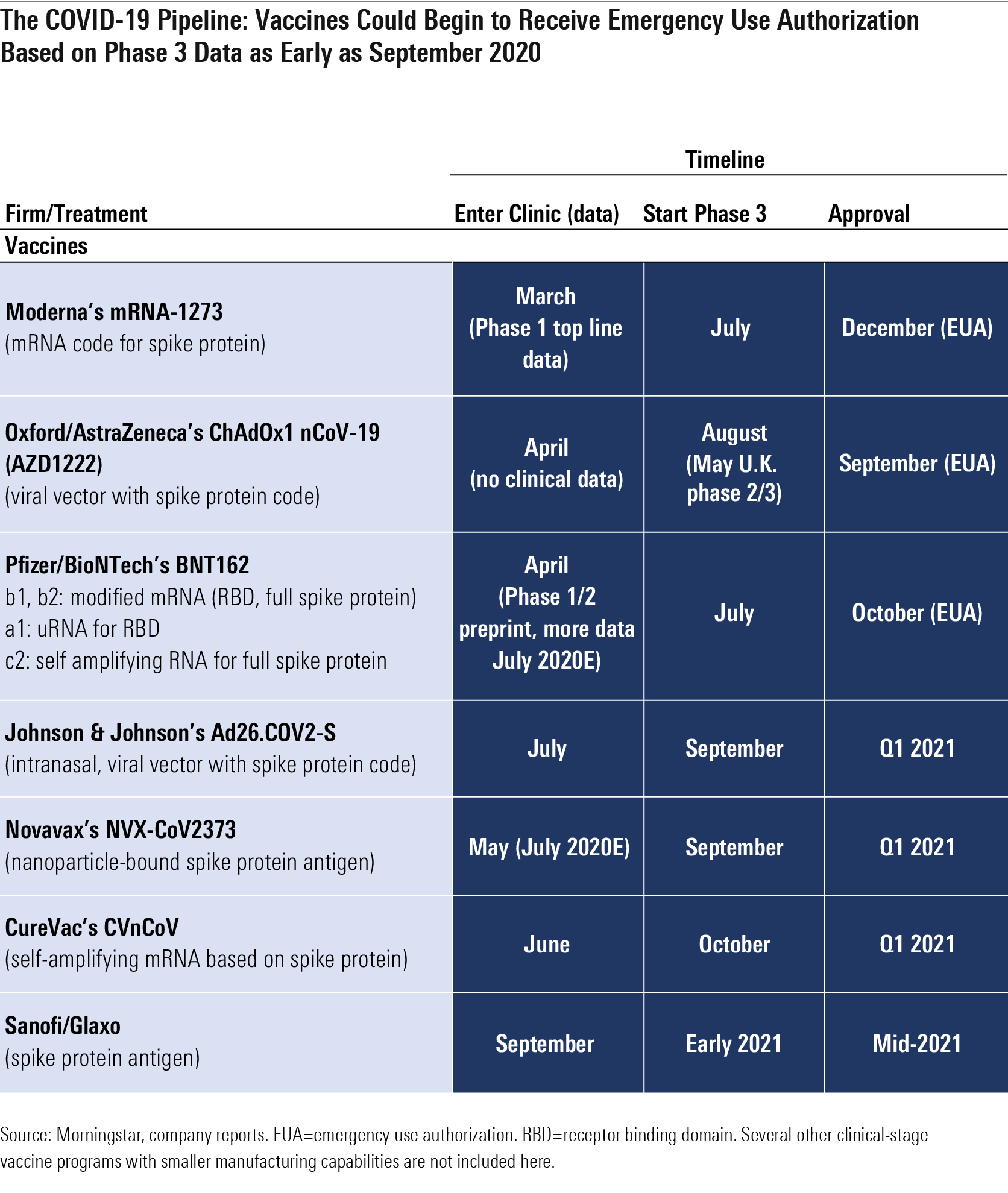 Pfizer and BioNTech’s (BNTX) RNA-based program could move forward on a similar schedule once the companies determine which of four potential vaccines to pursue and at what dose; initial data in July was promising, and more data is expected throughout July that could lead to a phase 3 start by the end of the month. Novavax (NVAX), which entered trials in May, brings another technology (antigen-based vaccine) to further diversify potential vaccine mechanisms, and CureVac’s mRNA vaccine entered trials in June.

Together with Merck (to enter phase 1 this year), these programs are all likely finalists in Operation Warp Speed, a private-public partnership with U.S. agencies including the Department of Health and Human Services and the Department of Defense, which seeks to deliver 300 million doses of a new vaccine to Americans by January 2021.

Here, we outline what we forecast for the impact of new drug development.

Time to Market for New Vaccines Still Uncertain The length of time between phase 3 starts (where we have improving visibility) and widespread availability of a vaccine on the market is uncertain, but three vaccines look poised for potential emergency use authorization this fall in the United States, led by Astra/Oxford University (September), Pfizer/BioNTech (October), and Moderna (November).

Oxford has noted that if transmission is high, phase 3 results are possible in a couple of months, but if transmission drops, it could take six months. Therefore, these estimates seem reasonable assuming the companies are able to find regions of the U.S. and other countries with significant ongoing outbreaks, enroll trials rapidly, meet the U.S. Food and Drug Administration threshold of 50% efficacy, and avoid unexpected safety issues or findings of enhanced disease for vaccine recipients. We assume that emergency use authorization could be granted after phase 3 efficacy and safety data, but before the company can file for and receive full FDA approval, in line with June FDA guidance.

Profits from new vaccines should be relatively minimal; in fact, we do not include them in our valuation models. However, we do include antiviral remdesivir (commercial supply expected in the second half of 2020) and select targeted antibodies (like Regeneron’s (REGN) REGN-COV2). We model sales of remdesivir peaking at $3 billion in 2021 and REGN-COV2 around $2 billion in 2021 and 2022.

COVID-19 Drug Development Expected to Have Minimal Impact on Underlying Pharma/Biotech Growth We lowered our fair value estimates by almost 2% in aggregate for Big Pharma and Big Biotech companies in early April after factoring in the economic slowdown and disruption in use of drugs, vaccines, and consumer healthcare products due to the COVID-19 pandemic. We model near-term disruptions in drug utilization (particularly for drugs administered in hospitals) as well as delays in clinical trials and delayed or less effective new drug launches, but highly inelastic demand for most drugs should offset most recessionary impacts and prevent any moat erosion or long-term effect on pipeline potential from the pandemic. 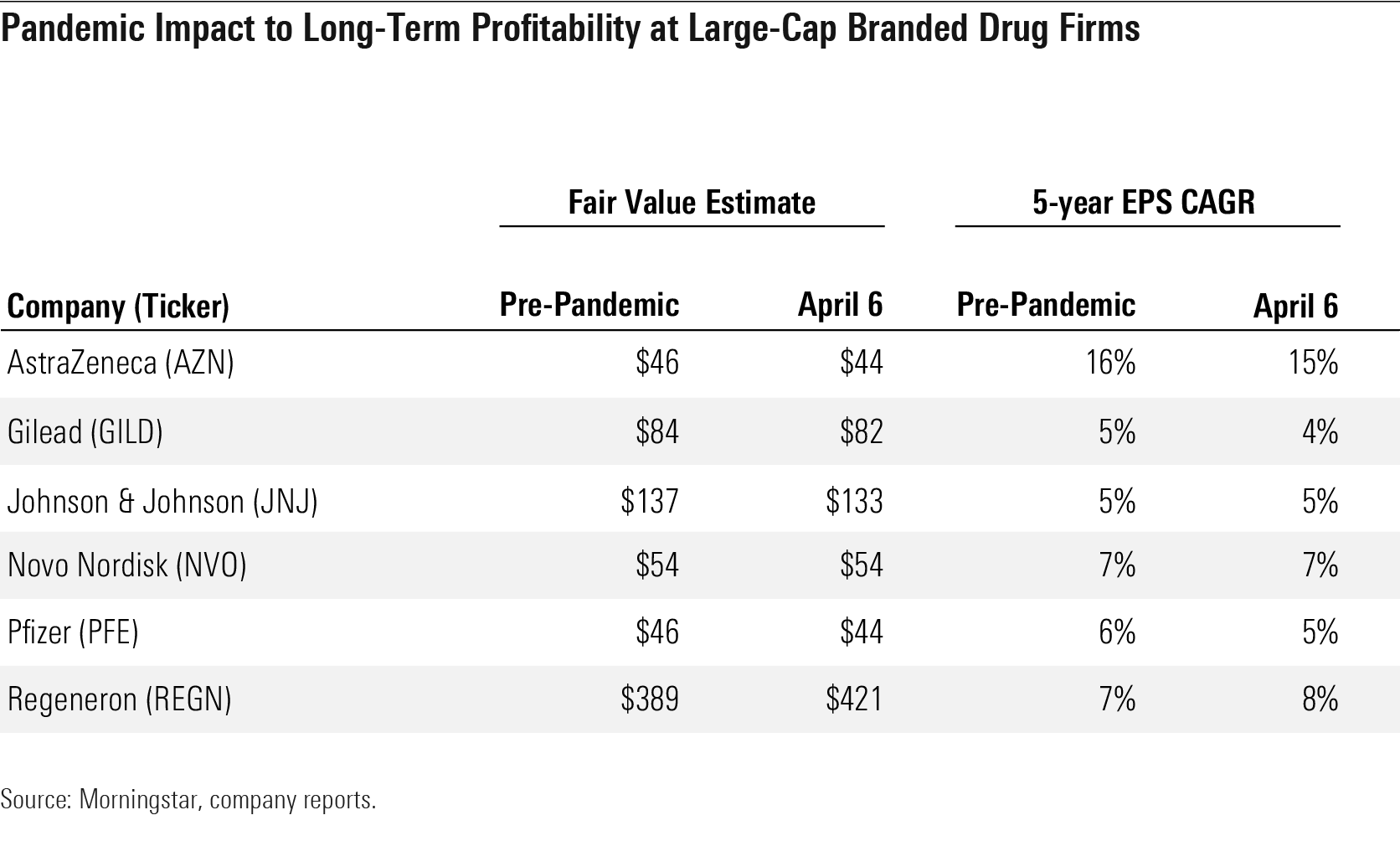 While access to drugs should normalize slowly throughout the year, and certainly in 2021 if a new vaccine becomes widely available, changing payer mix could create more headwinds for drug companies next year. However, we don’t include a hit from a shift to Medicaid in our valuation models, as we see a combination of types of job losses, transitional insurance options, improving economic conditions, and drug company portfolio and geographic diversification preventing significant impacts.

Impact of Rising Unemployment on Drug Pricing First, we assume that many of the jobs lost initially during the pandemic, such as those in the service industry (retail and restaurants), were unlikely to offer strong (or any) health coverage to begin with. Many of these Americans were probably already on more-affordable exchange plans. The shift of these Americans from no coverage or exchange coverage to Medicaid would have less of an impact on drug sales than the loss of patients from employer-sponsored health plans.

As of the end of May, employment in the U.S. was down by nearly 20 million jobs since February. Kaiser recently estimated that of the nearly 78 million people who lived in a family with someone who lost a job in March or April, 61% (48 million) were covered by employer-sponsored insurance before the pandemic led to job loss. Of these Americans, 27 million lost healthcare coverage as a result (unable to switch to a spouse’s insurance plan or to Medicare, for example), and 13 million are eligible for Medicaid, growing to 17 million eligible by January 2021 as unemployment insurance benefits end for most.

Newly unemployed who had previously been covered by employer-sponsored plans could begin with transitional coverage (COBRA), which can last up to 18 months, or unemployment insurance (most unemployment insurance benefits will be exhausted in 2020). Therefore, we expect minimal impact from Medicaid switching in 2020. We expect these Americans to eventually switch to exchange plans or, if they qualify, to Medicaid, which reimburses drugs at lower prices than private plans and could pressure drug company sales. Kaiser data (as of 2018) estimates that 49% of Americans were on employer-sponsored insurance; if all 17 million newly eligible switched to Medicaid in 2021, this percentage could fall by 5 percentage points, to 44%. This would be significantly above the shift that drug companies witnessed during the Great Recession.

Moody’s projects annual job losses around 8 million by the end of 2020, which would be a significant improvement from end-of-May numbers and allow many to avoid the transition to Medicaid. We expect further improvement in 2021 and beyond to reduce Medicaid enrollment and the related headwind on drug sales.

Portfolio and Geographic Diversification Can Shield From Payer Mix Risk to Drug Pricing Assuming that the economy does not improve and we do see significant numbers of Americans enroll in Medicaid in 2021, exposure at drug companies is likely to vary significantly. The most exposed companies would be those with previously high levels of patients on employer-sponsored insurance (this is the category with the most drug pricing power to lose) and those that have a history of taking significant annual price increases (because of Medicaid’s inflation rebate rules that limit price increases). Some older branded drugs have Medicaid rebates approaching 100%, making certain Medicaid sales minimally profitable. Insulin (Eli Lilly (LLY), Novo Nordisk (NVO), Sanofi (SNY)), immunology drugs (AbbVie’s (ABBV) Humira, Amgen’s (AMGN) Enbrel), and respiratory drugs (GlaxoSmithKline (GSK)) could be among the most exposed to such a shift.

We modeled Novo Nordisk as an example of a company with what we see as relatively high exposure to payer mix shift. Novo Nordisk currently gets 11% of total sales from U.S. insulin and 28% of total sales from U.S. GLP-1. If we assume that Novo Nordisk essentially loses all insulin sales (assume 100% Medicaid rebate) and half of GLP-1 sales (assume 50% additional rebates beyond private insurance levels) from the privately insured U.S. patients who could switch to Medicaid (assume 17 million eligible, or 5% of Americans), this amounts to a total 1.5% impact on sales. We see this as an upper limit on potential sales impact for the companies we cover, given Novo Nordisk’s high exposure and the likelihood for improving unemployment levels in 2021 and beyond.

International Drug Pricing Decline Limited by Already Low Overall Pricing We expect to see an impact on drug pricing outside the U.S. due to the pandemic, perhaps as early as 2021, as budgets are broadly squeezed. Even though we already assume low-single-digit pricing pressure annually in Europe (built into contracts with pharma and biotech companies), we expect countries to increasingly work together to negotiate prices. Budgets will no doubt be tighter following COVID-19 stimulus programs, and unlike in the U.S., drug prices have a hard ceiling due to balanced-budget requirements. That said, international drug pricing is already quite low relative to the U.S.; even including an average 43% U.S. price discount from list prices, Morningstar’s own analysis of rebates and individual analysis of net pricing of top revenue-generating drugs gets us to prices in the other developed markets that are roughly half those of U.S. net prices.

Karen Andersen does not own (actual or beneficial) shares in any of the securities mentioned above. Find out about Morningstar’s editorial policies.