This is the second of two articles examining the impact of COVID-19 on the U.S. economy. For the first article see here.

U.S. Can Mount Solid Recovery in Second Half Even as COVID-19 Drags Highly on Some Sectors We think a crucial perspective in modeling the near-term trajectory of the U.S. economy is to look at the industry level, as different industries are seeing disparate impact from the pandemic. We group U.S. industries into three broad categories based on direct impact from COVID-19: highest affected (such as restaurants and hotels), moderately affected (such as retail or healthcare), and other industries.

While the U.S. doesn’t issue timely GDP statistics on each industry, we can use the employment figures to gauge industry trends in economic activity. Based on the data through May, we project that total U.S. employment will be down 12.5% in the second quarter overall. We think the highest-affected industries will see a 37% hit. Within each industry, we think the fall in GDP will surpass the fall in employment, owing to labor hoarding (companies retaining more workers than needed to carry out operations). In particular, the Paycheck Protection Program strongly encourages companies to hold on to excess workers. Despite this, we expect the aggregate fall in GDP to be less than the fall in employment, as the industries being hit hardest have a much higher share of employment than GDP. The highest-affected industries (for example restaurants, which have a low level of output per worker) account for 15% of U.S. payroll employment though just 6% of U.S. GDP. Altogether, we expect a 10.6% drop in second-quarter GDP (36% on an “annualized” basis, which is most widely quoted in the media).

We expect a sharp GDP rebound in the second half of 2020, with 5.9% growth in the third quarter and 3.2% growth in the fourth quarter (nonannualized). We don’t think the need for social distancing will disappear in the second half of 2020, as COVID-19 will still be a lingering threat until a vaccine is broadly available, which we project will occur in the first half of 2021. Still, even while social distancing weighs on highly affected industries, we think the rest of the economy can cope with the ongoing pandemic.

Crucially, we think consumer and business confidence will surge in the second half of 2020 as data rolls in on the efficacy of vaccines, even though actual production and deployment of vaccines won’t fully ramp up until 2021. Phase 2 data on the vaccines could arrive by late summer, and phase 3 data could be in by midfall. The assurance that the pandemic will soon be alleviated should spur consumers and businesses to increase their spending.

By mid-2021, we expect output in even the highest-affected industries to substantially recover as the threat of the virus is virtually eliminated by mass vaccination. Overall, we think U.S. GDP will recover to fourth-quarter 2019 levels by the third quarter of 2021.

We project a 5.1% drop in 2020 U.S. real GDP. We expect the bulk of the drop to be accounted for by lower household consumption. This is a very different pattern than in prior recessions; this time, consumer services (which accounts for 70% of household consumption) is taking an unprecedented hit. However, we think investment won’t fall as severely as in a typical recession. We expect residential investment to be down just 5%, as housing markets look fairly resilient so far, thanks partly to record-low mortgages rates. We think business investment will fall 11%, short of the 21% drop in 2009. Business investment is highly cyclical, but it tends to operate at a lag (compared with housing, for example). The plummet in business investment in 2009 came well after the financial crisis reached a fever pitch. This time around, however, aggressive policy action looks to be shoring up economic confidence before too much damage can be done in terms of business investment. Also, the massive rebound in stock prices (with the Morningstar U.S. Market Index only down 7% year to date as of June 12) has improved businesses’ eagerness to invest.

The first chart shows our forecast compared with the U.S. Congressional Budget Office’s latest update and the consensus average of forecasts gathered by The Wall Street Journal. Compared with consensus and the CBO, we expect just as severe a drop in second-quarter U.S. GDP, but we’re much more optimistic on the rebound. The CBO’s report cited the lingering impact of the coronavirus in the second half of 2020; while we agree the virus won’t go away until 2021, we think much of the economy can recover even as the virus continues to weigh heavily on some sectors (such as restaurants and hotels). 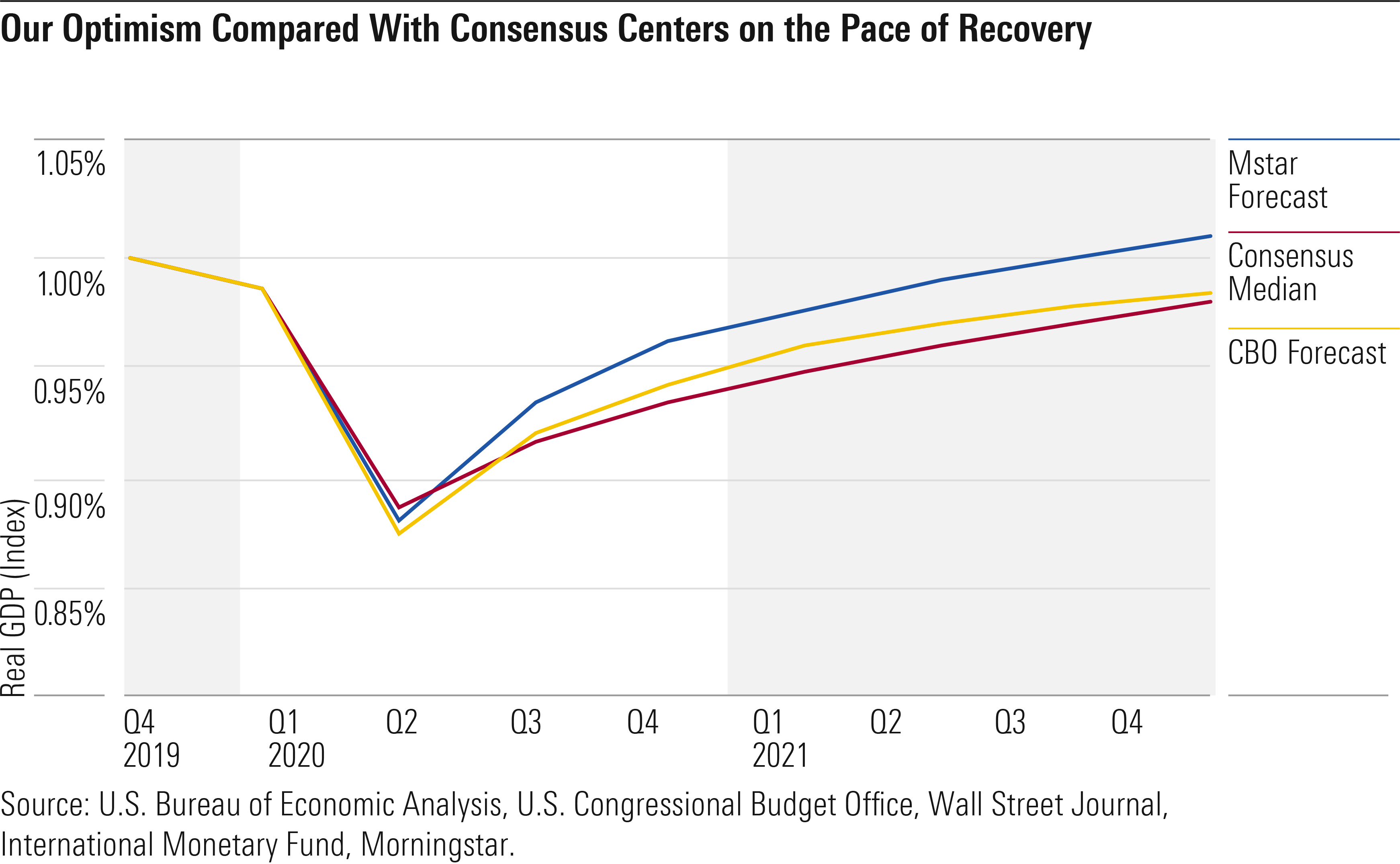 The second chart compares our current U.S. real GDP growth forecast with our pre-COVID-19 forecast (which was in line with the International Monetary Fund’s October 2019 outlook). After 2021, we expect modestly higher growth than previously forecast, so that the U.S. converges nearly with its pre-COVID-19 growth path. By 2024, we expect the level of U.S. real GDP to recovery to merely 1% below our pre-COVID-19 expectation. The additional catch-up growth required from 2022 to 2024 to achieve this target isn’t daunting--in fact, it’s about in line with the 2014-19 average growth rate--as growth expectations for the U.S. were already modest before the pandemic. 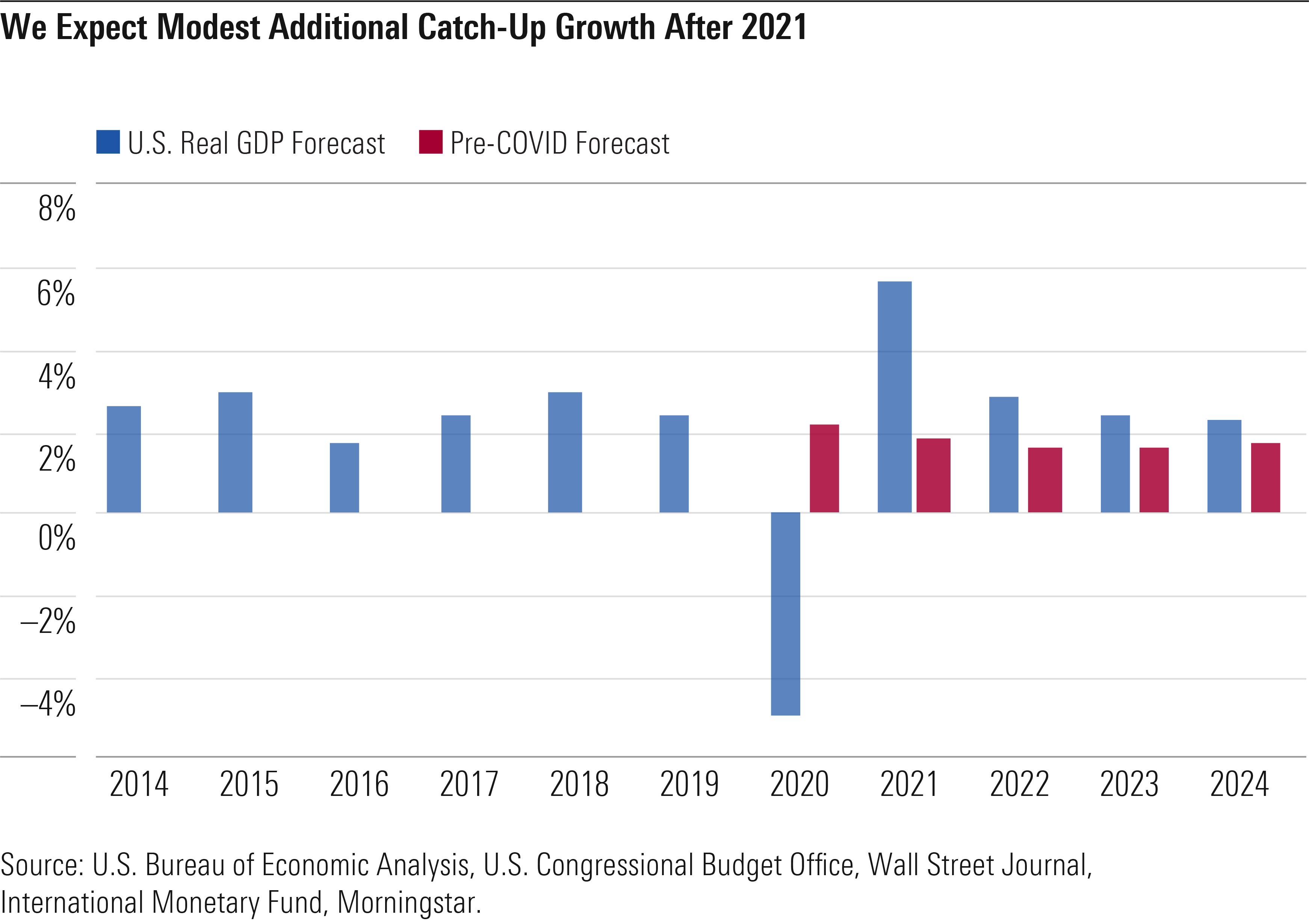 Permanent Damage to Labor Markets Seems Small So Far While the job losses accumulated so far during the pandemic seem intimidating (including unemployment reaching the highest level since the Great Depression), we don’t think the COVID-19 recession is creating lasting damage to the labor market yet.

Total employment in May rebounded by almost 4 million jobs versus April levels. In particular, workers returned to jobs in hard-hit industries like restaurants as social distancing receded somewhat. This suggests that near-term furloughs aren’t creating permanent job losses. While the current unemployment rate of 13.3% remains well above prior recessions, most workers report that they’re only temporarily laid off--a situation vastly better than prior recessions. Only 190 basis points of the unemployment rate is accounted for by permanent layoffs, which is far below the peak unemployment levels in the past two U.S. recessions. While some might ascribe this to wishful thinking by workers, we observe that workers didn’t make this mistake in prior recessions: Workers reported that most layoffs were permanent even in the early days of prior recessions.