Shares of Gilead Sciences (GILD) shot up 5.7% on April 29, after Dr. Anthony Fauci, director of the National Institute of Allergy and Infectious Diseases, said the firm’s experimental drug remdesivir could modestly improve recovery times in patients with COVID-19.

Fauci said that results from a randomized placebo controlled trial sponsored by the NIAID showed that remdesivir has a “clear-cut, significant, positive effect in diminishing the time to recovery.”

Although Fauci noted that the data from the study has yet to be peer-reviewed and analyzed, he said he was confident that the data provided clear-cut evidence that remdesivir is effective, and as such he believes there is an ethical obligation to let the people in the placebo group know so they can start receiving the treatment that works. He went as far as to say that remdesivir will be “the standard of care” for COVID-19 patients.

"We see imminent emergency use authorization from the Food and Drug Administration and full FDA approval by mid-year," Andersen said. But that doesn’t mean it’s time to stock up on shares of Gilead Sciences.

“While remdesivir is an example of the sort of innovative antiviral medicines coming from Gilead's pipeline, which has created a portfolio of HIV and hepatitis C drugs that support a wide moat, we don't think the drug has yet demonstrated that it will have a large and sustained impact on Gilead's future cash flows," Andersen said.

Remdesivir's roller-coaster of news has caused the stock price to whipsaw throughout April, with shares trading in a range from $72-$85. Andersen’s fair value estimate has stayed within a tight range of $82-$85 over the trailing four-week period.

A lot of the news that has moved the stock price this month is based on uncontrolled studies, which Andersen believed provided a murky view of remdesivir’s effectiveness. Not only that, but she had already built in a high probability of the stock’s approval in 2020 and continued use throughout 2021; in her valuation model for Gilead, she estimates peak sales approaching $2 billion in 2021. Although that sounds like a lot of money--and it is--it represents only a small percentage of Gilead’s overall revenue. Gilead is a diversified, large-cap pharmaceutical firm whose trailing 12-month revenue tops $22 billion; the majority of its revenue comes from its industry-leading therapies for HIV and hepatitis C. In addition, it’s uncertain whether that revenue will be sustained beyond a few years given that COVID-19 vaccines are currently in development--once a substantial portion of the population receives the vaccine, demand for COVID-19 therapeutics such as remdesivir would likely wane. 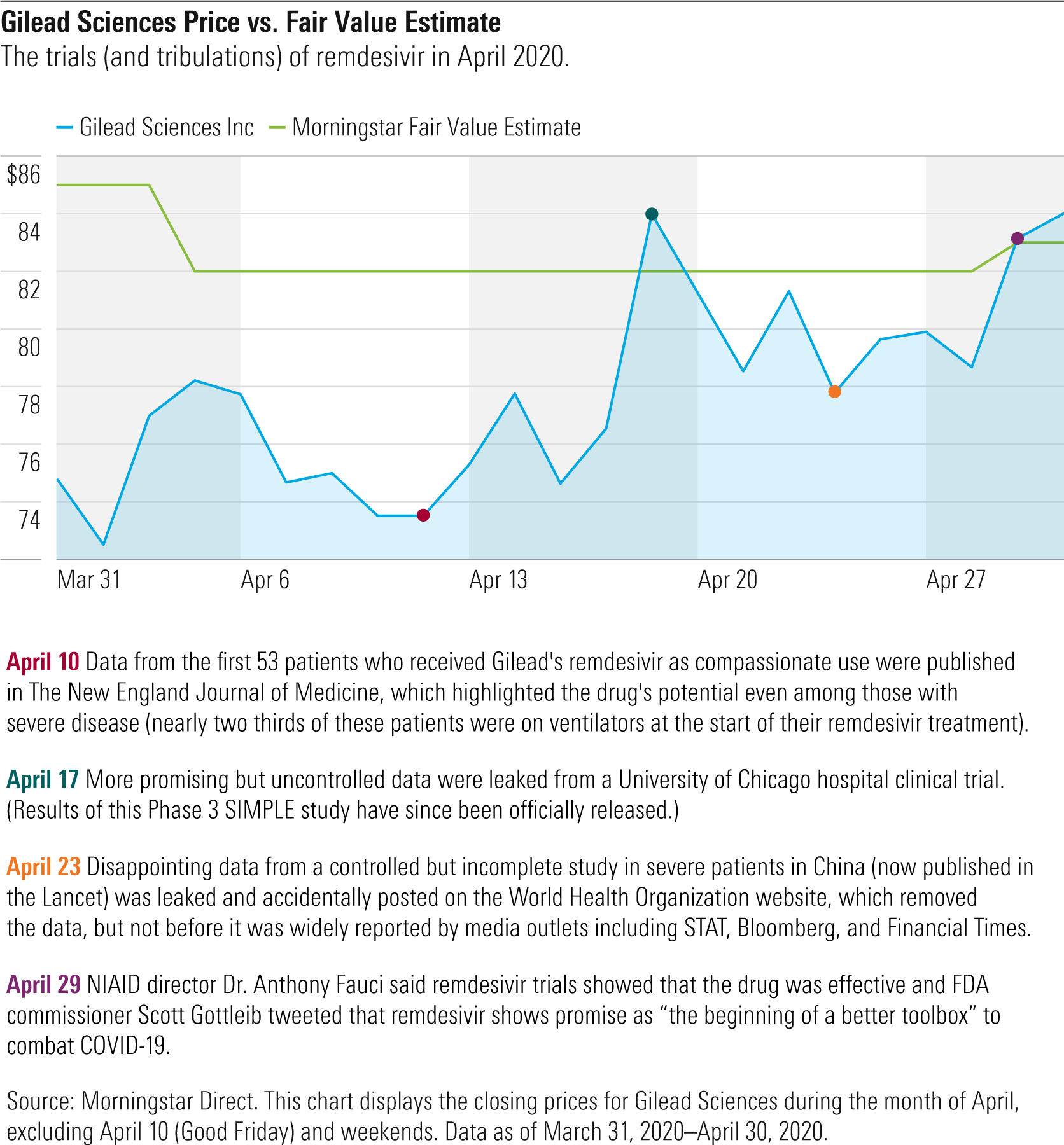 Karen Wallace does not own shares in any of the securities mentioned above. Find out about Morningstar’s editorial policies.