March 2020 was a month no one will forget. The lasting human impact of the continued spread of the coronavirus will be immeasurable. The near-term impact on global financial markets was large and violent. Here, I will look at how global markets performed in March, how investors responded, and what opportunities may have emerged--all through the lens of exchange-traded funds.

Almost Nowhere to Hide Nearly every major asset class experienced losses in March. Of the 1,980 nonleveraged exchange-traded products in Morningstar’s U.S. database, just 62 (3%) posted gains for the month. The majority of those 62 were bond funds. Many of them offer exposure to U.S. Treasuries, which caught a safe-haven bid amid the market meltdown. Long-dated Treasuries performed particularly well as interest rates declined sharply.

Exhibit 1 features March market price performance figures for a sampling of Morningstar Medalist ETFs representing most major asset classes. Investors in a blended global market portfolio lost nearly 10% in March. Stock markets were down across the board, though some fared better than others. U.S. stocks held up well compared with both developed international and emerging-markets stocks. A strengthening U.S. dollar played a role in explaining U.S. stocks’ relative outperformance. 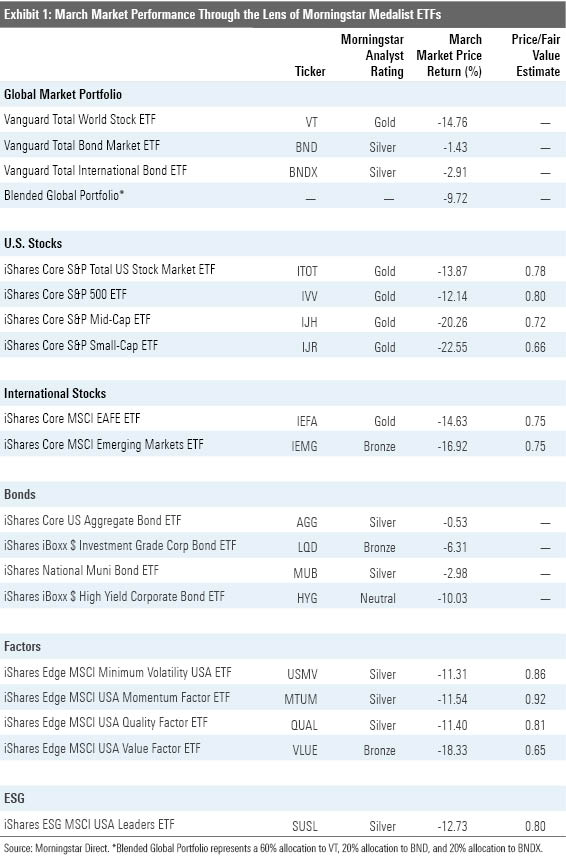 Within the U.S. market, large caps performed better than their smaller brethren. In the case of iShares Core S&P Small-Cap ETF (IJR), its exposure to more vulnerable names in the consumer discretionary and real estate sectors explained much of its underperformance versus iShares Core S&P 500 ETF (IVV). The performance spread was even more pronounced across the diagonal of the Morningstar Style Box. For example, iShares S&P 500 Growth ETF (IVW), which falls in the large growth Morningstar Category, outperformed iShares S&P Small-Cap 600 Value ETF (IJS), which sits in small value, by nearly 15.5 percentage points. IJS’ greater exposure to economically sensitive names in the financials, consumer discretionary, real estate, and energy sectors contributed to its nearly 26% decline.

Strategic-beta ETFs representing a variety of single-factor exposures generally performed as expected in March. Funds offering focused exposure to the quality and low-volatility factors tended to perform relatively better than the broad market. Value-oriented funds had a rough month. Interestingly, momentum stocks showed some resilience. All five of the U.S. large-cap-focused momentum ETFs in Morningstar’s database outperformed iShares Core S&P Total US Stock Market ETF (ITOT). In all cases, an orientation toward larger, growthier names and the use of risk-adjusted measures of momentum in their index methodologies helped to explain this result.

Finally, in March we initiated coverage on iShares ESG MSCI USA Leaders ETF (SUSL), awarding it a Morningstar Analyst Rating of Silver. SUSL is an effective way to invest in firms with strong environmental, social, and governance practices. Long term, it should deliver better performance than most funds in the large-blend category, owing to its cost advantage, broadly diversified portfolio, and effective ESG screens, which should slightly lower risk. Our thesis held in March, as the fund slightly outperformed ITOT. The fund was slightly harmed by its stock selection within the energy sector (it takes a sector-neutral approach, so its weighting to individual sectors is in line with the broader market). But it was aided by better stock picks within the industrials and technology sectors.

How Have Investors Responded? Exchange-traded fund flows were mixed in March. Stock funds saw inflows while investors fled most bond funds (see Exhibit 2). U.S. large-cap ETFs were the most popular and core bond funds and emerging-markets stock funds were the least (see Exhibit 3). 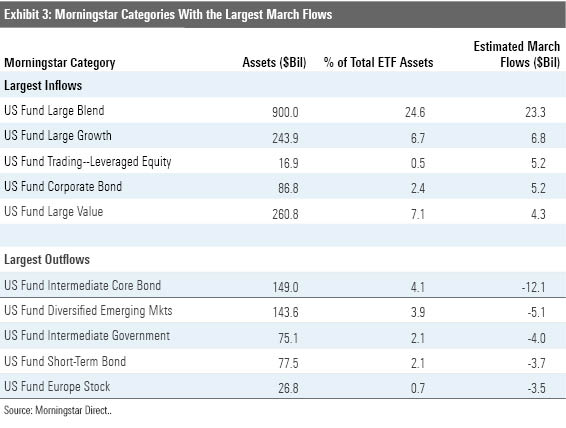 The fact that ETFs offering exposure to the same underlying index ranked among those that experienced both the largest inflows and outflows in March is not unusual (see Exhibit 4). It speaks to the breadth and diversity of the ETF investor base and the variety of ways in which investors use these funds. Looking at flows at an ETF issuer level can help to tune out some of the noisiness that is a regular feature of short-term ETF flows and yield some signals. From this perspective (see Exhibit 5), it appears that the “Steady Eddie” clientele served by firms like Vanguard and Charles Schwab, which tend to serve more advisors and individual investors, are steady as ever. Meanwhile, March’s market volatility was a boon for firms like State Street and ProShares, whose ETF ranges cater to a crowd that uses ETFs in a more tactical manner. 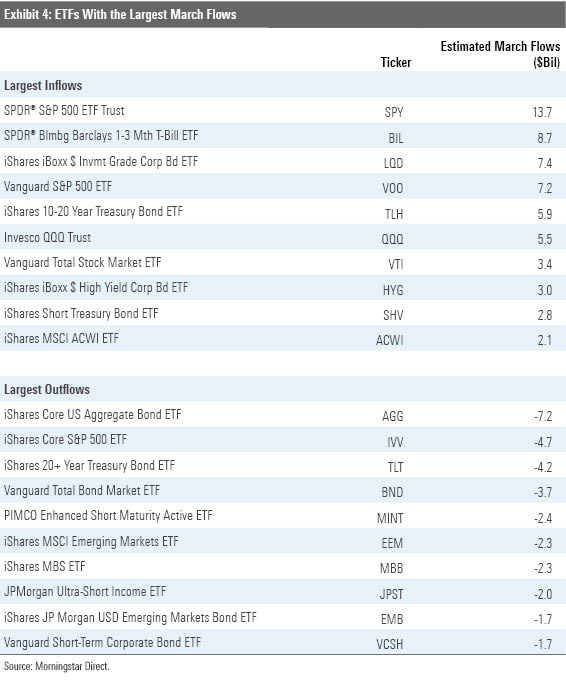 Exhibit 6 features the 10 ETFs that were trading at the largest discount to their fair value estimates as of the end of March. Nine of them belong to the equity energy category. Pain is pervasive in the energy sector as demand has declined and supply continues to flood the market. With producers running out of places to store their output, prices have collapsed--as have the share prices of firms operating in the oil and gas services industry. 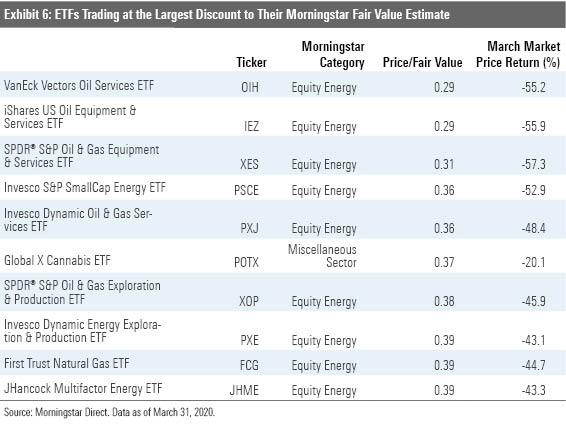 Exhibit 7 features the 10 broad-based ETFs that were trading at the largest discount to their fair value estimate as of the end of March. The common thread among most of these funds is a value orientation. Some of them deliberately lean into value by virtue of selecting and weighting stocks based on value criteria. This is the case for funds like Invesco S&P MidCap 400 Pure Value ETF (RFV). Others back into a deep-value orientation by selecting stocks based on their dividend yields. WBI Power Factor High Dividend ETF (WBIY) is an example. The fund selects its 50-stock portfolio from the highest-yielding half of its selection universe. 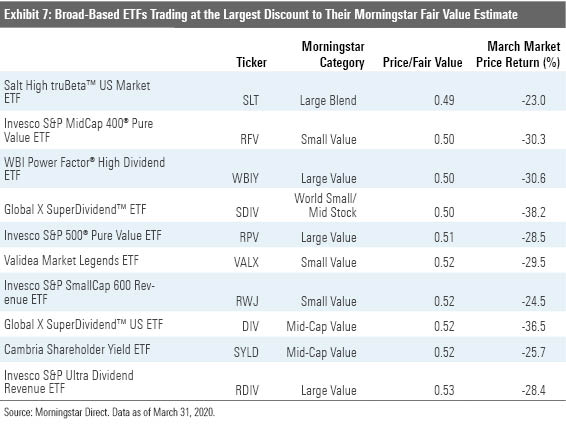 Ben Johnson does not own shares in any of the securities mentioned above. Find out about Morningstar’s editorial policies.