The market has tumbled in recent weeks, with global stocks losing around 18% since Feb. 19, 2020. Volatility like that can rattle investors. If that’s you, don’t fret--it’s normal to feel that way at times.

What you don’t want to do, though, is change up your investments in haste or with little forethought. If you’re in a retirement plan, your main investment holding just might be a target-date mutual fund. Target-date funds are popular with 401(k) investors, who have invested more than $1 trillion in them.

Given that popularity, I thought I’d run through a few potential scenarios that frazzled target-date fund investors might find themselves deliberating.

For each scenario, I’ve offered a suggestion for how to approach the issue and provided the rationale behind that suggestion.

To be sure, what’s paramount isn’t how you use a target-date fund. It’s that you have a well-founded plan and stick with it. Plans can change, and sometimes it takes market turbulence to make flaws apparent (that is, like overestimating our risk appetite). But hopefully the suggestions below can be applied more broadly to other aspects of your investing lives, as the principles are pretty universal.

Scenario: “I’ll sell my target-date fund and buy another that’s held up better during the sell-off.”

Suggestion: Unless your plans have changed, you shouldn’t replace the 2040 fund. If you have 20 years or so to retirement, then a 2040 fund is much likelier to advance your goals than a more conservative 2020 fund aimed at those who are entering retirement now and, thus, prize stability.

Rationale: The nearer a fund’s target date, the smaller its equity stake. Why? As an investor approaches retirement, it makes sense to dial back equity, which is more volatile, in favor of bonds. That’s why a 2020 fund would have less exposure to stocks than a 2040 fund, as shown below. The 2040 fund lost more than the 2020 fund because it invests almost twice as much in stocks, which have been harder hit. 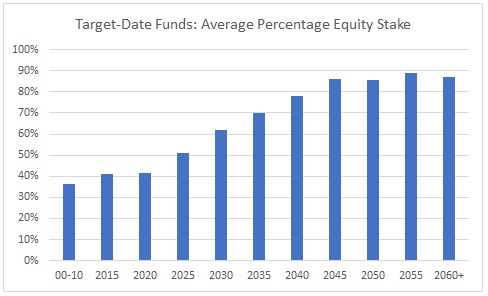 But that isn’t a reason to sell your 2040 fund. After all, if you have a longer time horizon, then it can be prudent to invest heavily in stocks, which tend to reward investors with higher returns than bonds over longer time frames. That aside, it also misses the fact that while stocks have lagged bonds amid the sell-off, they handily outgained bonds prior to then.

To illustrate, the chart below plots the average returns of the most-popular target-date fund categories--2020, 2025, 2030, 2035, and 2040 target-date funds--during the post-Christmas 2018 rally (horizontal axis) and the recent sell-off (vertical axis). The upshot? While the more equity-heavy target-date funds have suffered deeper losses during the sell-off, they also posted bigger gains prior to then. 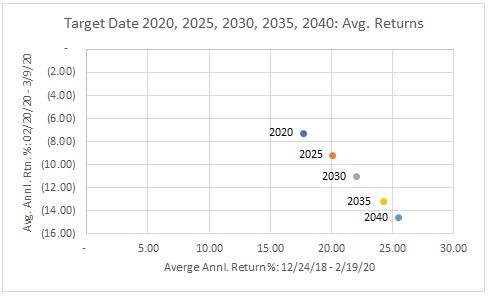 As we extend the measurement period, what we find is that the more aggressive, stock-heavy target-date funds have indeed outperformed the more conservative options, as shown below. But it comes with extra volatility at times, which we’re getting a fresh reminder of now. 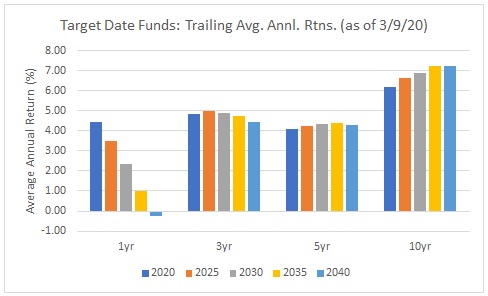 Scenario: “I’ll ditch my target-date fund and just hunker down in cash until the coast is clear.”

Example: You’re holding a 2030 target-date fund. It’s lost about 11% during the sell-off. You reason it’s best to get out of the market until things calm down. Then you’ll re-evaluate.

Suggestion: Unless your goals and time horizon have dramatically changed, you shouldn’t go to cash. You can certainly reassess your risk appetite and, if you find you can’t handle sharp market moves like we’ve seen lately, shift to a more conservative mix. That holds especially true for those who expect to enter retirement prior to 2030 or who are courting heavy equity risk elsewhere. But otherwise sweeping moves like these in and out of investments are probably unwise.

Rationale: Soothing as it might seem to sell out and go to cash, it’s nearly impossible to get the timing of these moves right. Investors too often sell low and buy high. This holds not just for novice investors but also professionals. For instance, “tactical allocation” mutual funds attempt to beat the market by rapidly shifting their investments in anticipation of market movements. None of these funds has beaten the simple U.S. 60% stock/40% bond portfolio to date since we established the “tactical allocation” category in October 2013, as shown below. 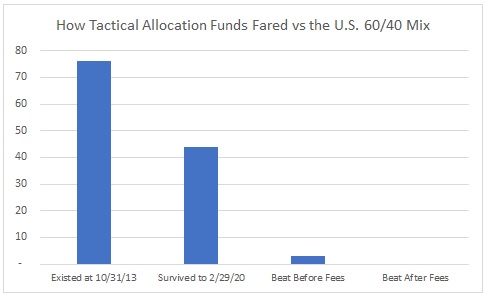 Notwithstanding this, a good question to ask yourself is “When will I know it’s time to re-enter the market?” If your answer goes something like “After the market rallies again,” then there’s good reason to wonder whether by then you’ll already have missed out on a good chunk of the market’s gains.

Scenario: “I’ll replace my target-date series with something that delivers guaranteed income.”

Example: You’re holding a 2025 fund. You expect to enter retirement in the next five years, but your fund has lost about 9% during the downturn. You’re being pitched on replacing the target-date fund with a variable annuity offered through your plan.

Suggestion: Be leery. While annuities can play a useful role in supporting retirement spending, variable annuities are often complex and laden with fees and other provisions. What’s more, you could be locking in a paltry yield while paying through the nose for the comfort of the guarantee.

Rationale: Given the recent flight to safety, government-bond yields have plunged, as shown below. This pancakes variable annuity rates, which were already low to begin with. For example, as of March 1, 2020, one major insurance carrier was offering a variable annuity to 403(b) plan participants through financial advisors that paid a meager 1.25% rate (subject to a 1% floor).

Rather than lock in such pitiably low rates, consider simpler, cheaper approaches to managing and sustaining retirement income. For instance, my colleague Christine Benz has been a strong proponent of the Bucket approach, which prudently emphasizes total return over yield, yet still boasts attributes that can give jittery retirees (or retirees-to-be) peace of mind.

Scenario: “I’ll replace my target-date series with another series that’s outperformed during the sell-off.”

Example: You’re on the plan sponsor’s investment committee. It’s your job to select the funds that participants can choose off the plan’s menu. The target-date fund series you chose has underperformed the relevant category averages during the downturn. You figure it’s best to replace that series with another series that’s performed better than average.

Suggestion: If the replacements have stronger fundamental merits than the current funds, then a change could make sense. But if it’s all about performance, think twice before you make changes.

Rationale: For instance, maybe the potential replacements bested the averages because they’re cheaper than the norm. Or perhaps they boast a better process for setting the asset mix or a more seasoned and better-resourced investment team.

On the other hand, if the decision to replace the current funds boils down to performance alone, it’s likely to devolve into a form of performance chasing. Why? Because short-term performance differences between similar funds usually boil down to stylistic differences that wash out over time. Thus, just as one gives chase to an outperformer, its returns ebb and eventually revert to the mean.

Consider the 2030 target-date category. From Dec. 24, 2018, through Feb. 19, 2020, the average 2030 fund gained 22.1% per year, while the average 2030 fund lost 11.1% from Feb. 20 through March 9, 2020. Which funds tended to outperform during the rally? Those that invested more than average in stocks (that is, that ranked in the category's top and second quartiles by their equity percentage stake). And which tended to underperform during the sell-off? The same funds, as shown below. An investor who hops to and fro between the best-performing series is therefore usually chasing whatever style or asset class has done best recently. That's not likely to be a profitable strategy given the fleeting, cyclical nature of these performance trends.

For more about the trends driving today’s target-date strategies, download the full report. Get My Copy