There’s been some chatter lately that even "winning" active funds—that is, those that have beaten their benchmarks recently—are getting hit with outflows. That would be remarkable given investors’ propensity to chase performance. In general, if a fund has beaten its bogy, it has usually been able to rake in assets. So, if we saw investors pulling money from winning funds, it would indicate a dramatic reversal. In this piece, we’ll take a closer look at the data to see if investors are, indeed, pulling their assets from winning funds and offer a few thoughts on trends that might be driving this behavior.

Study I defined winning funds as those which generated positive excess returns versus their category-assigned benchmark over the trailing one and three years ended Jan. 31, 2017. For example, if a fund in the large-value Morningstar Category beat the Russell 1000 Value Index—the index assigned to the large-value category—over the past year, it’s a winner. If it lags that index, it’s a loser.

Then I tallied the estimated net flows to these funds over the corresponding one- and three-year periods. Morningstar makes these estimates based on each fund’s reported net assets, performance, and any distributions (estimated flows are the “plug” in the formula). From there, I simply aggregated the flow data for all winning and losing funds.

Findings I found that investors have indeed pulled assets from winning active funds over the past year, but not the past three years. All told, investors pulled a net $99 billion from active funds and $214 billion from losing funds, in the 12 months ended Jan. 31, 2017. 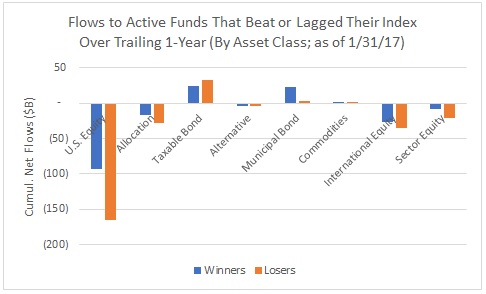 The outflows from winning funds are concentrated mainly in U.S. equity funds, especially large-growth, though some international equity and allocation funds also got hit. On the other hand, winning active bond funds took in cash.

The picture normalizes when we look over the past three years, though. As shown, winning funds took in about $425 billion in net assets over that span, though it’s worth noting that more than half of that went to bond funds. Also striking: Investors pulled more than $1 trillion from lagging active funds in the past three years. 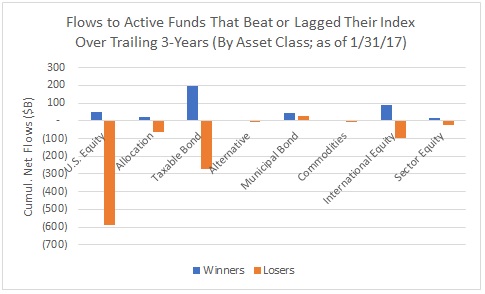 Ground zero for the shift from active to passive has been U.S. equity. Given that, I telescoped in on active U.S. equity funds. Here’s what those results look like. 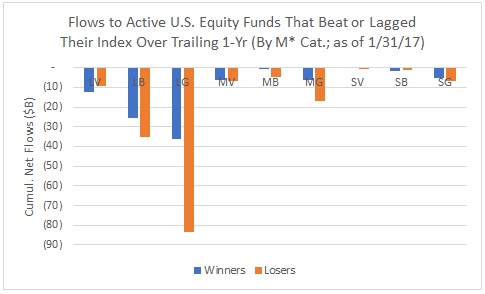 Strikingly, it didn’t seem to matter much if a fund beat its index—it probably got redeemed anyway. In total, investors yanked a net $93 billion from winning active U.S. stock funds in the year ended January 2017. And if a fund lagged, well, then it was likely orders of magnitude worse ($165 billion in net outflows, in aggregate).

When we look back over three years, we can see an even clearer break between funds that beat and those that lagged: Funds that lagged were annihilated, while those that beat more or less subsisted. 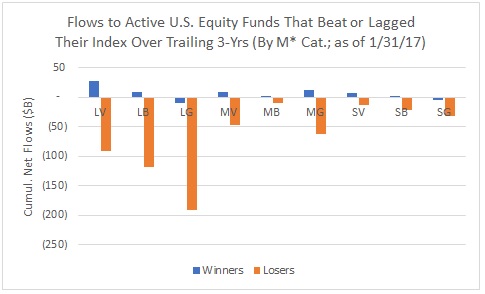 Conclusion As should be evident from the above charts, the last year was unusual in that winning active funds got so little love from investors. That was especially true of U.S. stock funds, large-cap funds in particular, with large-growth being ground zero in the stampede to passive.

But when we expand the time horizon to three years, the picture looks a bit more familiar, with winning funds hauling in assets and losing funds shedding them. This suggests that the seemingly indiscriminate selling over the year ended January 2017 doesn’t form a trend—yet.

Indeed, the recent rash of outflows from winning active funds bears monitoring for signs of continuation and even acceleration. Investors tend to extrapolate past performance into the future. Given active funds’ struggles in recent years, this could translate to investors assuming that passive will continue to outperform and, for that reason, replacing their stakes in active funds with allocations to passives.

That could prove hazardous. To be sure, investors are well advised to minimize expenses (including tax costs) and, importantly, to work within their circle of competence (which, for most, does not encompass manager selection). In these situations, passive is a sensible choice. But when investors chase performance, as some could be doing at present, then the behavioral costs can swamp any expense savings.

For example, the average dollar invested in  Vanguard 500 Index Investor (VFINX) had gained around 4% annualized over the decade ended Feb. 28, 2017. Over that same span, however, the fund itself had risen roughly 7.5% per year. What that means is that bad timing—buying high or selling low—had cost investors nearly half of the fund's returns.

As with so many things, it's about drawing the right lesson, which in investing means having a thoughtful plan and implementing it in a well-considered way. It does not mean rigidly adhering to a particular doctrine or narrative, the latest being that active funds are a bunch of bums that should be tossed at the first opportunity. If you're going to index, do it for the right reason, recent performance not being one of them.

Jeffrey Ptak does not own (actual or beneficial) shares in any of the securities mentioned above. Find out about Morningstar’s editorial policies.