While the Vanguard growth story has been ongoing for some years, the behemoth provider of (mostly) passive open-end funds and exchange-traded funds outclassed rivals in an unprecedented manner in 2016. Morningstar estimates show that worldwide inflows into Vanguard amounted to net USD 289 billion. In all, long-term funds and ETFs took in net inflows of USD 533 billion. This implies that net flows to Vanguard exceeded the net flows of all remaining 4,000 global fund providers included in our data base. Drilling deeper reveals that Vanguard’s success tells a grim story about the predicament of the actively managed fund industry. In 2016, actively managed funds posted outflows of USD 92.3 billion, while index funds brought in USD 625.2 billion. The advent of passive funds has been evident for years, but it was by no means clear that such an avalanche would hit the active fund industry. In 2015, inflows into passive funds amounted to USD 571.1 billion, while active funds took in 284.9 billion. But from 2012 through 2014, active fund inflows easily outpaced those of index funds, as indicated in the table below.

While the magnitude of index funds’ surge was not predictable, the reasons for their success are clear: Morningstar research has shown that low fees are one of the best predictors of good long-term performance. Moreover, costs can be predicted, while investment results cannot. Investors have caught on. In 2016, the top three asset gatherers were all index fund providers. Following Vanguard by a wide margin, iShares posted net inflows of USD 137.2 billion, and State Street enjoyed USD 63.0 billion of net inflows into its index funds globally. The top 10 Providers Worldwide 2016 (open-end funds and ETFs) 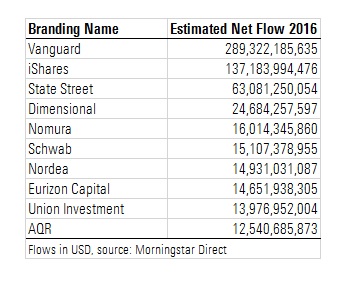 It appears that U.S. investors have been especially keen to capitalize on the advantages of low-cost funds. Morningstar research has indicated that cost-sensitivity is by no means a common factor among investors globally. A study on the drivers behind global asset flows published in 2015 showed that, controlling for other factors, low costs were a dominant driver behind fund flows in the United States, but much less so in Europe, where low costs do not explain inflows to funds. A look at the regional distribution of Vanguard flows reveals that 2016 was nearly exclusively U.S.-driven: USD 277 billion—96% of all Vanguard inflows—targeted long-term funds domiciled in the U.S. European and cross-border funds took in USD 14.3 billion, while Vanguard funds in Oceania suffered outflows of USD 4.6 billion. Taking a look at the growth of index funds in Europe reveals that index fund inflows have outpaced actively managed funds’ for quite some time. Because of the lower base effect, however, this is not clearly reflected in global flow trends, which are dominated by the USD 15.1 trillion long-term fund market in the U.S. While index funds make up 34% of the U.S. long-term fund market, they represent only 15% of the EUR 7.3 trillion fund market in Europe. The top asset gatherer in 2016 among index fund providers in Europe was iShares. The BlackRock subsidiary posted net inflows of EUR 26.2 billion—more than twice the inflows of Vanguard´s Europe-domiciled index funds. By way of comparison, Vanguard outpaced iShares in the U.S., taking in net flows of USD 277.2 billion versus USD 107.8 billion for iShares.