It was a very dull week for markets after U.S. stocks have moved up by 7% or so since Election Day. Now everyone is waiting for results, patiently, for now.

U.S. economic data was much as expected this week, with inflation matching targets and industrial production looking seemingly better, which we believe is a bit of an illusion. We believe that inflation is still a very big problem for consumers, even if it doesn't get any worse from here. Wages aren't moving all that much faster than inflation anymore.

Short-term housing data looked slightly better, though the pain of a slowing market for apartments is finally becoming more visible, and longer-term data is no longer accelerating. China matched its annual 6.7% growth rate target, but it took a bunch of stimulus to get it to even that relatively low number.

Headline Inflation Closing In on Core Inflation Rate and Wage Growth The market seemed to take in stride the 0.3% increase in the month-to-month headline inflation growth rate and 0.2% increase in prices, excluding food and energy. Indeed, this did equal the consensus forecast.

However, we favor looking at year-over-year, averaged data, which shows a much less benign picture. For almost two years, headline inflation has run well below core inflation and hourly wage growth. That has been very beneficial for the consumer, who has been driving almost all of the economic growth in the U.S. recently. It is no coincidence that retail sales growth rates peaked early in 2015, about the same time the gap between inflation was at its widest level. 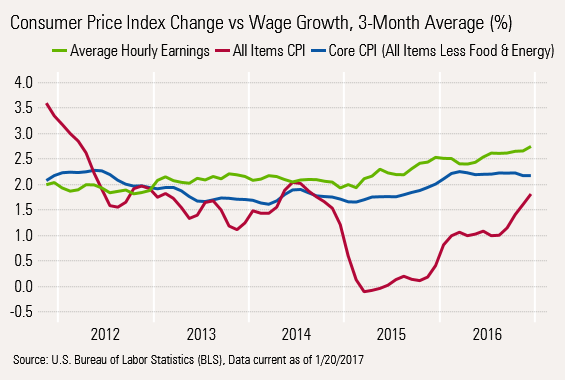