Alts Flows Hit the Brakes We can observe slowing growth among alternative funds in several ways, such as the ratio of new fund launches to liquidations. Whereas several years ago the industry was in a decided growth mode, more recently new launches have come at a more moderate rate while liquidations have ticked up. Through November 2016, there were 30 new alts funds and 56 liquidations. The higher liquidation rate can be ascribed in part to the boom in launches from 2010-13; for those funds that have hit three-year marks and still failed to achieve much in the way of assets, many firms decided it was time to pull the plug.

Another measure of asset growth is net flows, or the amount of money coming into or leaving funds, net of capital growth (or loss) effects. Every alternatives category but managed futures was in net outflows through November 2016 (see Exhibit 1). However, it's worth noting that alternatives were no outlier in this regard, as equities have been in net outflows for the last several years. What's relevant for alternatives funds, however, is that they had been one of the few broad categories on a consistently positive growth trajectory for the previous half decade.

Assets were concentrated in the largest funds during alternatives' growth phase, and that trend has held during this more recent period of retrenchment. Looking across five of the largest alternatives categories, most of the outflows have come from the five largest funds in the category. This suggests that assets in popular funds or those that were sold hard may be fickle. However, positive growth has continued in the longer tail of funds with smaller asset bases.

Underlying Performance Doldrums Several factors are likely at play in the sluggish growth trends. Perhaps foremost is the poor performance of alternative strategies relative to equities as the long bull market continues. Simply put, the hedged and noncorrelated strategies that populate the alternatives universe are not designed to keep up with the gaudy returns that we've seen from equity markets. Even when investors have bought alternatives for diversification, behaviorally it becomes very difficult to hold on to defensive funds when other funds are up considerably. Even from an absolute return perspective, market conditions have been poor for many alternative strategies. Many global macro strategies, for example, thrive on higher volatility and dispersion across asset classes, while managed-futures funds rely on consistent trends in markets. While there were momentary bursts of such conditions in 2016, for instance after the Brexit vote, volatility was generally low (the VIX index, a measure of market volatility, had lost almost 30% through Dec. 16, 2016). Meanwhile a number of markets saw several price reversals, making it hard for managed-futures models to latch on to trends.

Looking across alternative fund category average returns through Dec. 16, what's perhaps most noticeable is the overall mundanity of returns (see Exhibit 2). Putting aside bear-market funds (which run inverse to the stock market and are frequently leveraged), most alts categories produced returns in the low to midsingle digits, while managed-futures funds on average lost about 2%. For some categories that eliminate almost all market exposure, such as market neutral and long-short credit, such modest, almost bondlike returns are within expectations. More-directional categories, like multialternative and long-short equity, are underachieving. Given the robust returns of domestic-equity markets, the paltry 2.3% return of the long-short equity category is particularly disappointing; contributing factors include underexposure to risk (beta), unexpectedly poor performance of short books, and weak security selection in the long books. 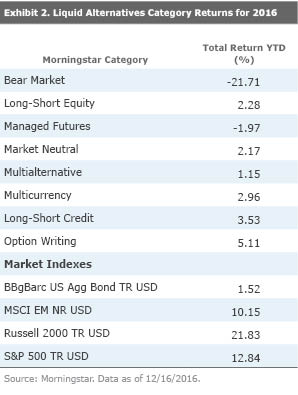 A More Granular Look When it comes to alternative fund categories, however, the averages can be deceiving, owing to the high degree of dispersion within many of the fund groupings. In the long-short equity category, for example, returns ranged from 25% at the top end to negative 17.6% at the bottom (all returns cited are through Dec. 16 unless otherwise noted). The multialternative category saw a top return of 17.5% and a bottom of negative 31% (though that fund was an outlier, as more funds were clustered in the negative 10% to negative 13% range). Even the ostensibly sedate market-neutral category saw returns as high as 13% and as low as negative 16%.

Within those wide range of outcomes, some Morningstar Medalists stood out.  Boston Partners Long/Short Equity (BPLSX), a former Morningstar Alternatives Fund Manager of the Year winner, hit the cover off the ball again, producing an eye-popping 23% return, despite maintaining about 40% short exposure. Though closed to new investors, the manager and strategy represent the best of what liquid alternatives can achieve, though few firms have the discipline and stringency to limit asset growth in order to preserve performance. In 2016, Morningstar initiated coverage on a newer, open Boston Partners strategy,  Global Long/Short (BGLSX), which has a Morningstar Analyst Rating of Bronze. This is a more diversified strategy than Long/Short Equity, akin to the Silver-rated, U.S.-focused  Boston Partners Long/Short Research (BPIRX). Long-short equity funds that take on more beta, either strategically or tactically, did well in 2016, as was the case for Bronze-rated  Diamond Hill Long-Short (DIAMX) (10.66%), which is driven by its topnotch value-based research process. And with the ascendance of value over growth in 2016, value-oriented long-short funds also outperformed, as seen in the 8.4% return of  Gotham Absolute Return (GARIX), which rebounded from an awful 2015.

It was an unusual year for managed-futures funds; as noted previously, longer-term trends were in short supply, so funds that did well and produced positive returns tended to be those with portfolios more diversified to include mean-reversion models, greater weighting on short-term periods, or even some degree of discretionary global macro. Indeed, the top-returning fund in the category uses a counter-trend model, which prospers in choppy markets. Meanwhile, pure trend-followers suffered, and the category's standard-bearer, Silver-rated  AQR Managed Futures (AQMIX), lost around 8%. But even amid the gloom, managed futures was the only alternatives category to be in net positive flows, perhaps a sign that advisors have come to recognize managed-futures funds as one of the best diversifying options in a portfolio. Morningstar also added a new managed-futures medalist to coverage, Bronze-rated  Abbey Capital Futures Strategy (ABYIX), a multimanager portfolio run by Dublin-based Abbey Capital that was introduced to the U.S. market without any onerous hidden swap or performance fees.

As we noted in our landscape report on the multialternative category earlier this year, the category can be broadly broken down by multistrategy, global macro, and hedge fund replication strategies. Although there are significant differences in the aims of these substrategies and how they are constructed, there is also a fair degree of overlap. Thus certain common factors across hedge fund and global macro strategies likely contributed to weaker performance, including taking on too little equity risk in general, misjudging markets ahead of the Brexit vote and post-U.S. election, and difficulties in event-driven bets, among others. The best-performing medalist fund in the category was Bronze-rated  Litman Gregory Masters Alternative Strategies (MASFX), with a 6.8% return through Dec. 16. This multistrategy fund takes a strategic, long-term approach and benefited in 2016 from its allocations to subadvisors with more-credit-oriented portfolios, such as DoubleLine and Loomis Sayles.

Bringing in the New Even in a sluggish year for alternatives funds, Morningstar kept its foot on the pedal when it came to coverage. Morningstar launched two new alternatives categories, long-short credit and option-writing, reflecting the growth in new products in those areas the past few years and also enabling us to sharpen the lines around the non-traditional-bond and long-short equity categories from which most of the funds emanated. Miriam Sjoblom wrote about some of the challenges facing long-short credit managers in the mutual fund space earlier this year.

Josh Charlson does not own shares in any of the securities mentioned above. Find out about Morningstar’s editorial policies.