A new Morningstar study out today shows that women are underrepresented in fund manager ranks globally, and there's been little improvement since the 2008 financial crisis.

Morningstar began formally studying fund managers by gender in 2015 after observing first-hand over decades that there are disproportionately fewer women in the fund industry. We studied the rates of women managers in three countries, the United States, Spain, and Hong Kong, and found that women are vastly outnumbered by men in fund-management ranks not only in absolute terms but also relative to other professional industries, including law and medicine.

In this latest look at fund managers by gender, we harnessed Morningstar's global database of mutual funds and their managers to consider fund managers across 56 countries, and the trends we saw in the U.S., Spain, and Hong Kong are repeated globally: Women are not often tapped to manage mutual funds, regardless of geography. Globally, about one in five fund managers is a woman, and that management rate is largely unchanged since 2008. These numbers suggest that the fund industry as a whole is not becoming more gender-inclusive.

Taking a deeper look at the data, we found there are geographic bright spots in the industry. Women have been named fund managers at a relatively higher rate in places such as Hong Kong, Singapore, France, Spain, and Israel. At least 20% of fund managers are women in these markets. But elsewhere, women are behind the global norm. In larger financial centers, such as Brazil, India, Germany, and the United States, the local rate of women-managed funds is below the global standard. 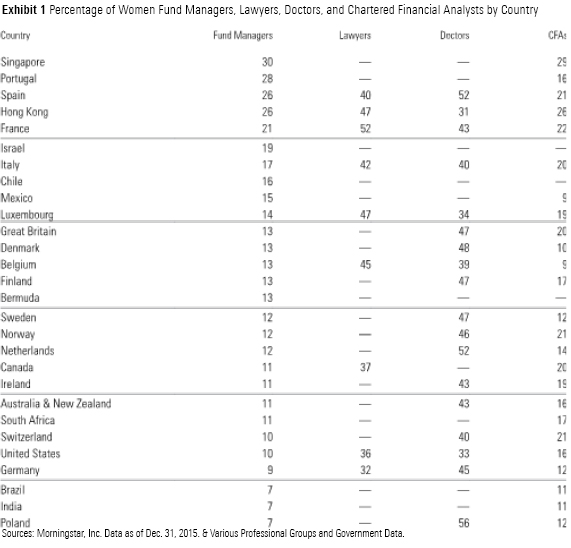 To study women fund managers, we considered 26,340 managers of funds registered in 56 countries, all of which are included in Morningstar's global database, making this study the most comprehensive of its kind. Morningstar indicated the gender of 15,996 of those managers primarily through information supplied to Morningstar by those managers' employers. For the remaining 10,344 managers, we identified each manager's gender by examining his or her first name. We ran those first names through an algorithm that assigns the probability of being a woman based on local census data. When the algorithm assigned more than 50% probability that the first name is female, we assumed the manager is a woman.

To audit the results, we manually verified managers' gender in cases where Morningstar's gender data did not match the algorithm's gender probability. We did the same for managers with gender-neutral first names, and in regions where the algorithm may not be sufficiently sensitive to local naming conventions. For example, in France, Patrice is more often a man's name, while in the U.S., Patrice skews feminine. To manually verify gender, we looked to professional photos, biographical descriptions, and titles and pronouns such as Mr., Mrs., Ms., he, she, his, or her. However, we were not able to include all countries. We did not include countries where first names are locally reflected by characters but then are translated into letters for storage in Morningstar's database or countries where first names typically are not associated with a specific gender. As such, we excluded China, Japan, and Taiwan from the study.

Once we determined each manager's gender, we began looking at the managers assigned to mutual funds and exchange-traded funds by listed domicile. Some funds, such as Templeton Global Bond, are domiciled in multiple countries, so these managers and their funds were included multiple times in the study. That said, each country's data reflects the funds--and managers--registered in that market.  It is also worth noting that Morningstar's manager data is more complete in some countries than others. In the United States, public documents reflecting fund managers' names are widely available and changes are reflected quickly in Morningstar's database. Not all markets are as transparent, however. There may be cases where the management information on a given fund is outdated. Even so, the broad trends hold true: Women are underrepresented in fund-management ranks globally.