Facebook's long-awaited and much-hyped public debut is finally here. The social-media giant filed its initial public offering with the SEC on Feb. 1, 2012. While the filing provided for the first time specific details about Facebook's financial health, it did not mention whether the shares would begin trading in a few months or even in 2012 (and at what price). The deal reportedly could raise $5 billion and value the company between $75 billion and $100 billion.

Facebook's IPO will be huge for founder Mark Zuckerberg and a few company insiders and early investors. But it probably won't be as much a boon for mutual fund investors. Morningstar research shows 50 funds have Facebook ownership stakes (in either the company's A and B shares or both). Funds offered by T. Rowe Price (TROW), Fidelity, and Morgan Stanley (MS) are among the firms with the largest aggregate share totals. But most of the shares owned by those firms are spread across diversified funds such as T. Rowe Price Growth (PRGFX) and Fidelity Contrafund (FCNTX) and represent a tiny amount of their overall assets. (Click here to read how Contrafund's Will Danoff purchased shares.) Even a wildly successful IPO probably won't move the performance needle at those offerings. Morgan Stanley may see the biggest boost among the three because Facebook shares in its funds constitute the largest percentage of assets among the 50 offerings, around 3% or so. (As reported earlier in Fund Times, Morgan Stanley managers valued their shares at around $25 each, a lower price than others.)

Below is a sampling of funds that own Facebook shares as of their most recent filing. Click here for the complete table. 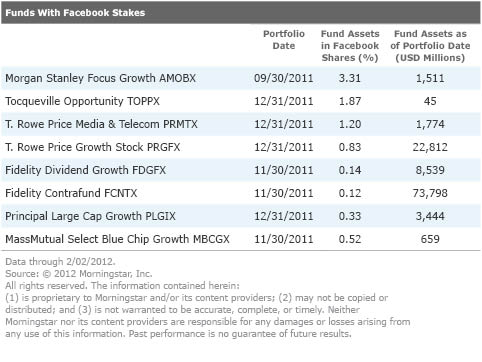 Thornburg Loses Seasoned Growth Manager Alex Motola, a key portfolio manager at Thornburg Investment Management, has decided to leave the firm this year. Thornburg didn't mention a specific date for his departure, adding that he would remain a member of the equity team in the interim.

During a 12-year stint at the firm, Motola ran both Thornburg Core Growth (THCGX )and Thornburg International Growth (TIGAX) using the firm's long-standing strategy of combining growth stocks of varying risk/reward profiles. While Core Growth experienced deep losses in 2008 and had since stumbled in the category rankings, its 10-year record under Motola through Jan. 31, 2012, still elevated it to the top 5% of the large-growth peer group. International Growth, which Motola had helped run since its 2007 launch, also performed poorly in 2008. But its three-year annualized return of 26.9% through Jan. 31, 2012, landed it in the top 5% of its respective peer group, too. Motola, who reportedly wants to spend more time with his family, is handing the day-to-day responsibilities for these funds to Tim Cunningham and Greg Dunn. They've worked closely on both, especially since being named associate portfolio managers in 2009. Cunningham and Dunn will now be named managers.

Thornburg has seen other managers depart the firm in recent years. Brad Kinkelaar and Cliff Remily, who previously helmed Thornburg Investment Income Builder TIBAX just helped PIMCO launch two dividend-focused funds. (Read Morningstar's take here.) Investors, though, shouldn't overreact to these exits. While they were solid managers, the firm still has a deep bench and continues to be a solid steward of shareholders' capital.

Janus Chairman Retires During its earnings call last week, Janus Capital Group (JNS) announced that its chairman, Steven Scheid, will retire in April and hand the reins to Glenn Schafer, who has been a director since December 2007. During his eight-year tenure Scheid presided over a tumultuous time in Janus' history that included high-profile manager departures and substantial outflows. He also played an important role in setting the firm's course when he rebuffed takeover attempts by larger firms.

Scheid's departure doesn't appear to signal changes in Janus' strategy though, despite the firm's ongoing struggle to improve fund performance and distribution. CEO Dick Weil has indicated he intends to stay the course, which includes pushing for improved distribution through intermediated channels, continued development of the fixed-income operation and growing the firm's offshore business. So it doesn't appear Scheid's retirement will have a near-term impact on Janus' investment culture or fund shareholders.

Baron Funds has also been an active fund launcher. The firm's new Baron Global Growth Fund will be run by Alex Umansky, who was hired away from Morgan Stanley last year to run Baron Fifth Avenue Growth (BFTHX). While there aren't many details about how the new fund will be run, it appears from an SEC filing that it will own a helping of small and midsized firms, Baron's specialty, located in both developed and emerging markets. Late last year the firm also launched Baron Energy & Resources.

In-House Promotions at Artisan  Artisan Funds announced the promotion of several analysts to co- and associate portfolio manager roles on a few of its funds. Charles-Henri Hamker has been named comanager of  Artisan International Small Cap (ARTJX) alongside Mark Yockey, who's run the fund solo since its 2001 inception. In this role, Hamker will have the authority to buy and sell stocks on his own, although Artisan stresses that Hamker will make few such decisions at first and that he'll be consulting with Yockey on them anyway. Also, Hamker and Andrew Euretig have been named associate managers on  Artisan International (ARTIX); Yockey has been that fund's sole skipper since its 1995 inception. Artisan says its associate managers don't have buy-sell authority, but that they are very active participants in those decisions. Finally, Daniel Kane has been named associate manager of  Artisan Mid Cap Value (ARTQX),  Artisan Small Cap Value (ARTVX), and  Artisan Value (ARTLX). Those funds are run by Scott Satterwhite, Jim Keiffer, and George Sertl, Morningstar's reigning Managers of the Year for Domestic Equity.

Etc. Investors can now purchase retail shares in the recently renamed First Eagle High Yield (FEHAX) fund. As reported previously in Fund Times, last year First Eagle added its first fixed-income fund to its lineup by first subadvising and now absorbing the $50 million Old Mutual High Yield. First Eagle has retained portfolio managers Edward Meigs and Sean Slein, who have run the fund since its 2007 inception. The fund has offered Institutional shares since its inception that came with a $1 million minimum investment. However, the new Retail share classes come with a smaller $2,500 hurdle.

Vanguard has added two members of its quantitative equity group as named managers on  Vanguard Equity-Income (VEIPX). James Troyer, who has been with Vanguard for 17 years, and Michael Roach, who has been with the family for 14 years, have joined James Stetler, who has run QEG's portion of the fund for nearly nine years. Wellington Management's Michael Reckmeyer, in the midst of his fourth year on the fund, still oversees a bulk of the fund's assets. In addition, shareholders approved Vanguard's plan to merge Vanguard Asset Allocation (VAAPX) into Vanguard Balanced Index (VBINX).

Lord Abbett has proposed merging the assets of Lord Abbett Large-Cap Value (LALAX) into Lord Abbett Fundamental Equity (LDFVX) pending shareholder approval. Investors in the $43 million Large-Cap Value fund have endured middling performance since the fund's 2003 inception. However, those shareholders will likely see a reduction in fees after the merger since the $4.8 billion Fundamental Equity is cheaper across all share classes.

Wasatch announced the creation of an Institutional share class for Wasatch Core Growth (WAAEX), Wasatch Small Cap Value (WMCVX), and Wasatch Large Cap Value (FMIEX). While these share classes are cheaper than the Retail versions, they require a minimum investment of $500,000.

Leah Traub, the current portfolio manager of Lord Abbett Emerging Markets Currency (LDMAX) was recently joined on the fund by comanager David Ritt, who has served on the firm's investment-management team since 2009.

Morningstar Fund Analysts does not own (actual or beneficial) shares in any of the securities mentioned above. Find out about Morningstar’s editorial policies.