A 4% starting withdrawal rate, with annual inflation adjustments to that initial dollar amount thereafter, is often cited as a "safe" withdrawal system for new retirees. Financial planner Bill Bengen first demonstrated in 1994 that such a system had succeeded over most 30-year periods in modern market history, and in the nearly 30-year time period since Bengen's research, a 4% starting withdrawal rate would have been too modest. But is such a withdrawal system safe today, given the confluence of low starting bond yields and equity valuations that are high relative to market history?

That's what I explored with my colleagues John Rekenthaler and Jeffrey Ptak in "The State of Retirement Income: Safe Withdrawal Rates." Using forward-looking estimates for investment performance and inflation, we estimate that the standard rule of thumb should be lowered to 3.3% from 4.0%, assuming a balanced portfolio, fixed real withdrawals over a 30-year time horizon, and a 90% probability of success (that is, a high likelihood of not running out of funds over the time horizon).

This should not be interpreted as recommending a withdrawal rate of 3.3%, however. That's because the previously mentioned assumptions that underlie the withdrawal-rate calculations--a long time horizon, a fixed real withdrawal system, and high odds of success--are conservative.

Nevertheless, given current conditions, retirees will likely have to reconsider at least some aspects of how they define their "safe" withdrawal rate to make their assets last. Our research finds that retirees can take a higher starting withdrawal rate and higher lifetime withdrawals by being willing to adjust some of these variables--tolerating a lower success rate or forgoing complete inflation adjustments, for example.

Alternatively, retirees who employ variable withdrawal systems that are based on portfolio performance--taking less in down markets and more in good ones--can significantly enlarge their starting and lifetime withdrawals. For instance, our research finds that some flexible withdrawal systems would support a nearly 5% starting withdrawal rate. But these variable strategies involve trade-offs--specifically, the year-to-year cash flow can be more volatile. This is evident in the chart below, which compares the starting real withdrawal rate of five different retirement spending methods with the volatility of their cash flows when analyzed across 1,000 simulated retirement spending scenarios. We'll examine those variable withdrawal methods in more detail later in this piece. 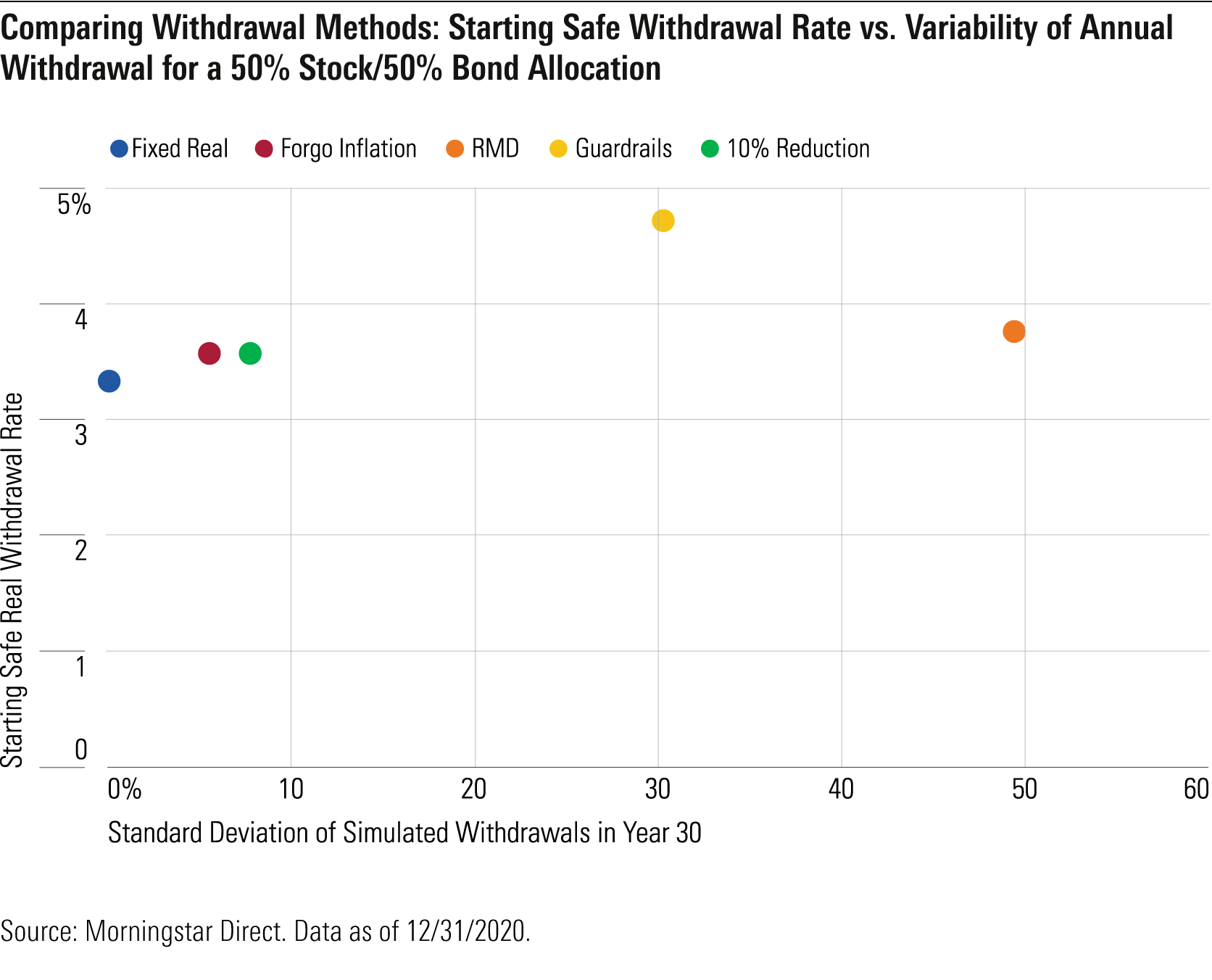 What We Can Learn From History About Safe Withdrawal Rates

The natural starting point for establishing a future withdrawal rate is to understand the withdrawal rates that have been safe in the past. The chart below shows the safe withdrawal rates for six asset allocations over 13 rolling 30-year time horizons, with the "mattress" representing money stuffed under a metaphorical mattress and not earning interest.

It assumes fixed real withdrawal rates--that the retiree withdrew X% in year one of retirement and then inflation-adjusted that dollar amount thereafter. The first time period begins in January 1930 and concludes in December 1959, while the final time period starts in January 1990 and concludes in December 2019. The calculated withdrawal rate is the highest rate that succeeds for 90% of the trials--that is, a hypothetical investor could make 30 years' worth of withdrawals without running out of money. The high and low ends represent the range of sustainable withdrawal rates during the 13 rolling 30-year time horizons tested. 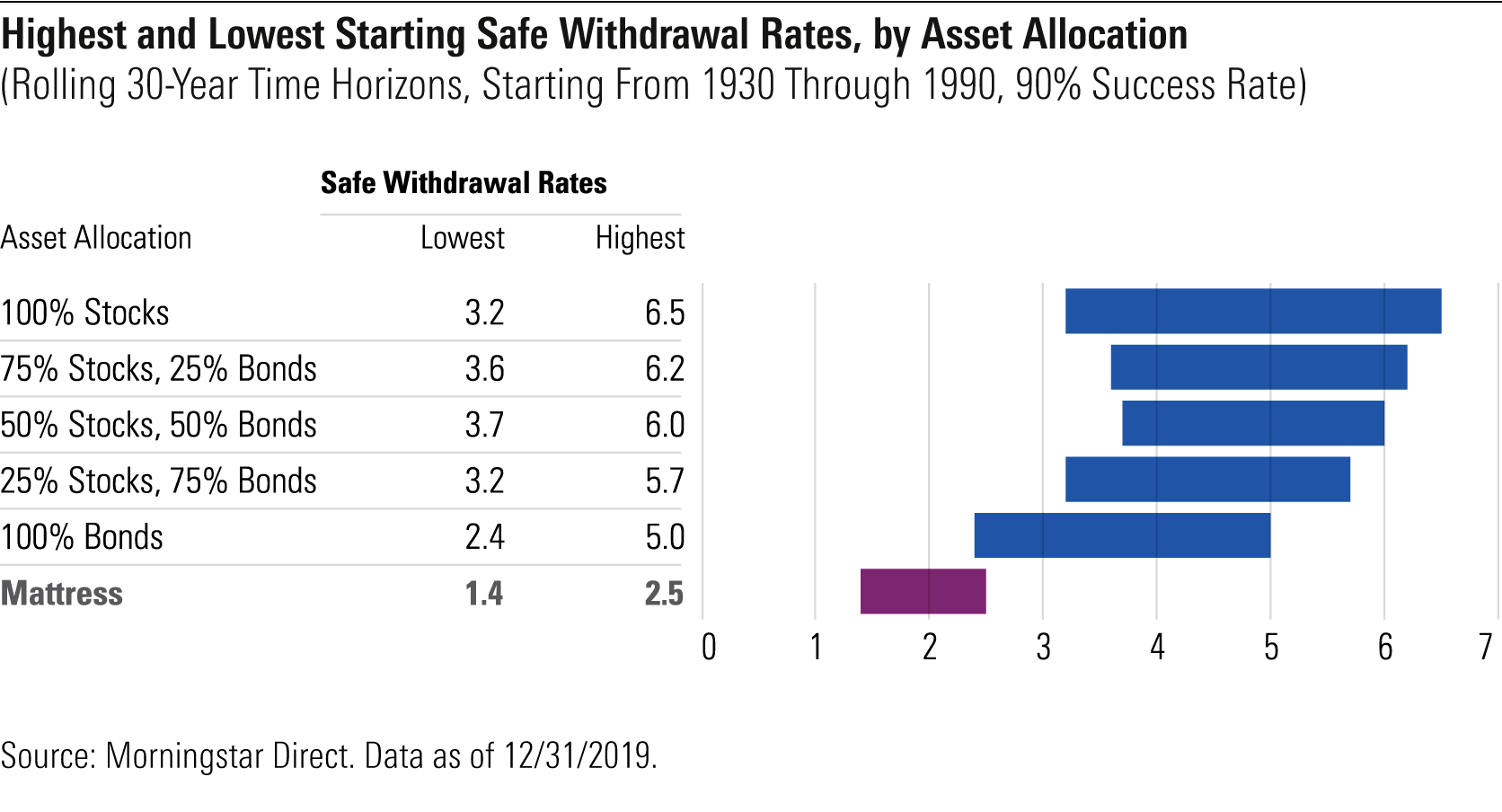 The chart below takes a closer look at just how much starting safe withdrawal rates would have varied depending on the time period. In short, the strong equity-market returns, declining bond yields, and generally mild inflation that have prevailed over the past 40 years have been supportive of higher starting withdrawals than was the case historically. 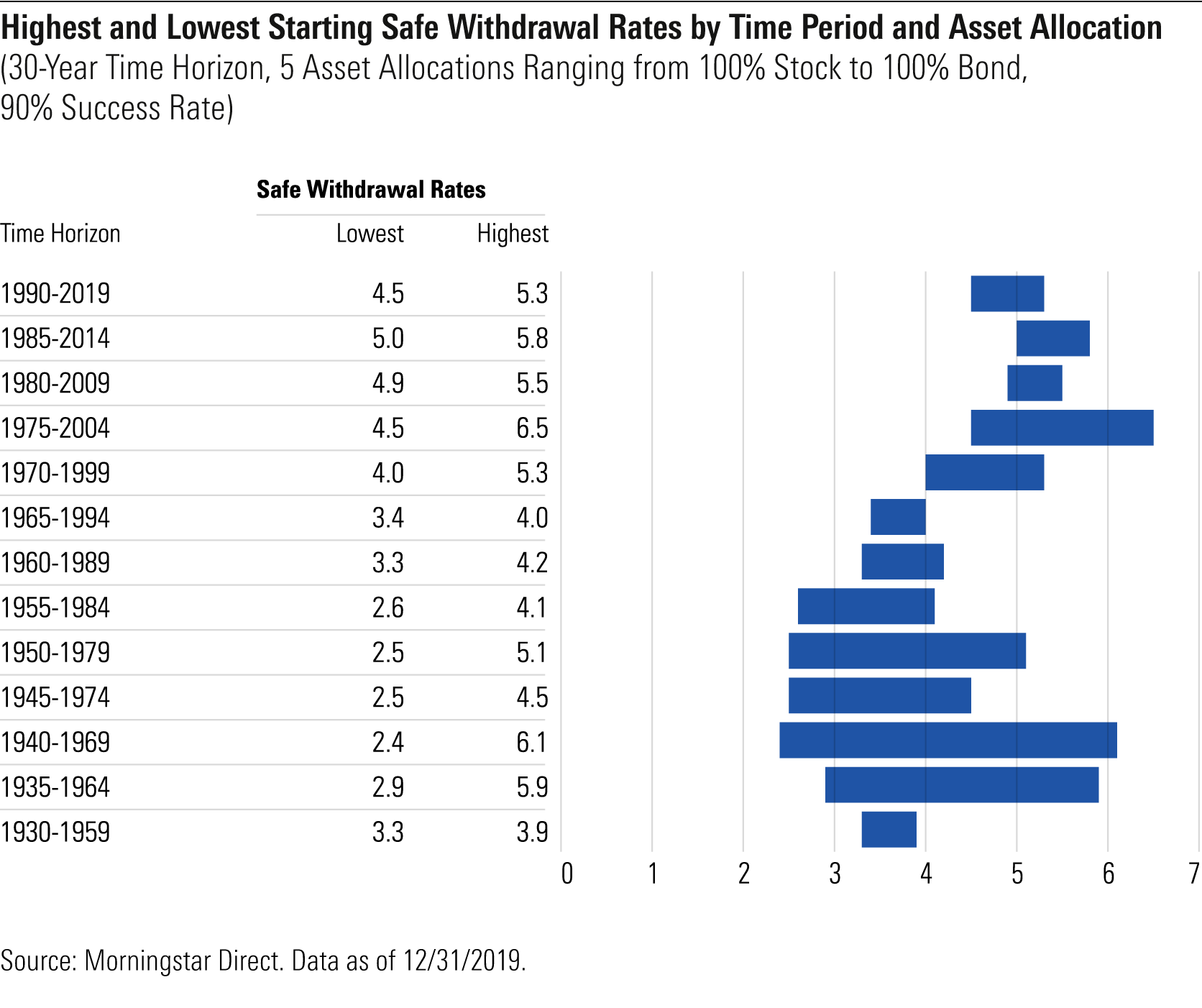 What Could a Safe Withdrawal Rate Be Going Forward?

Yet those very factors that have supported fairly high starting safe withdrawal rates over the past several decades argue for caution for new retirees. Three items distinguish today's market landscape.

Employing 30-year asset-class return estimates provided by Morningstar Investment Management--equity market returns that range between 6% and 11%, depending on the subasset class; fixed-income returns in the 2.0%-3.5% range; and an inflation rate of 2.1%--our research points to a 3.3% starting safe withdrawal rate for balanced portfolios. (That assumes a 50% equity/50% bond allocation and a 90% probability of success.) 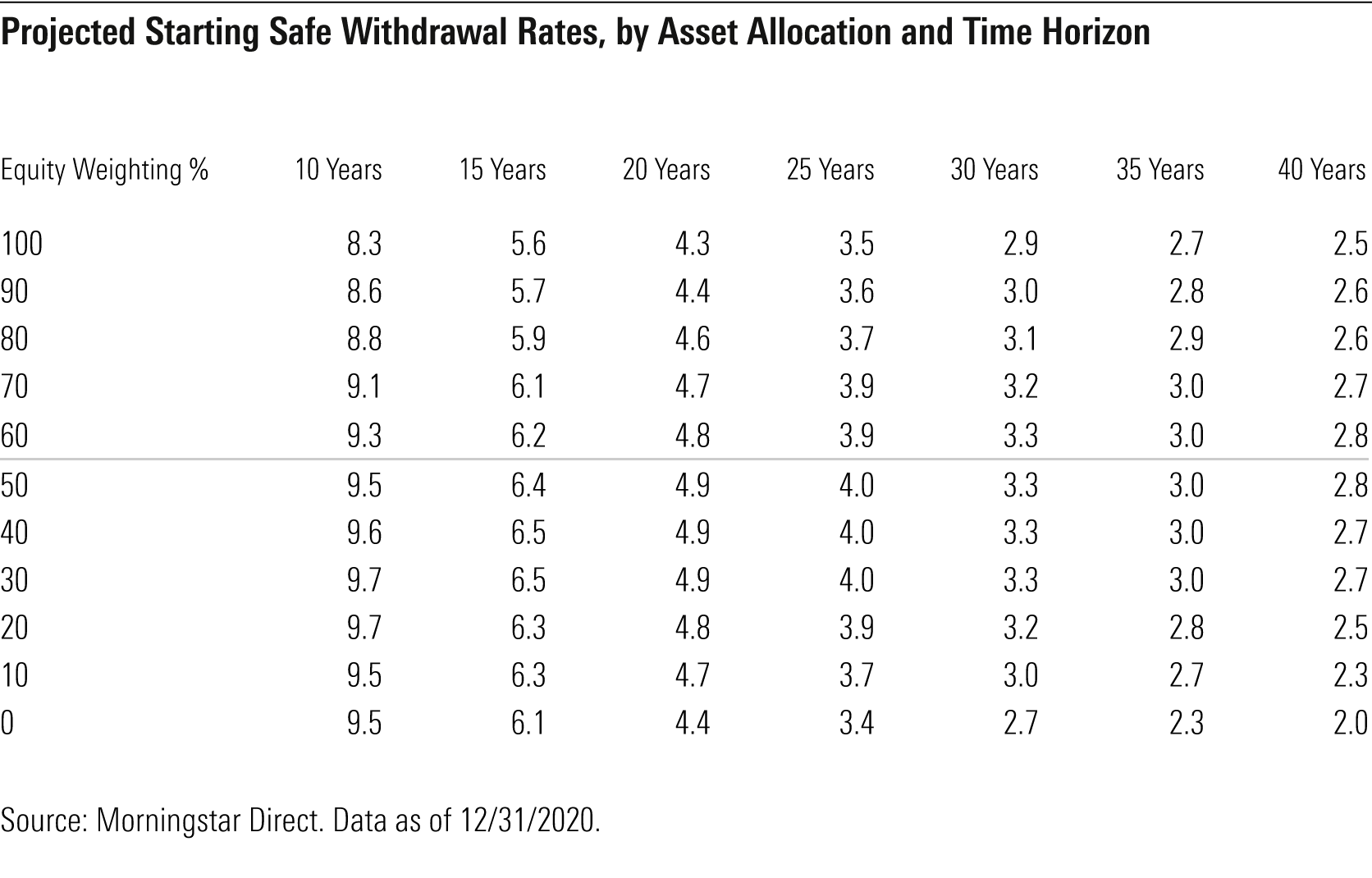 A starting safe withdrawal percentage in the low-3% range might seem demoralizing for new retirees, but a countervailing force is that most retirement savers' balances are appreciably higher than they were a decade ago, provided they had ample exposure to the rallying stock market.

Moreover, some modest adjustments to the assumptions underpinning starting safe withdrawals can result in a meaningful bump-up in withdrawal rates. For example, being willing to tolerate a slightly lower probability of success than 90% would result in an improved starting safe withdrawal amount, as shown below. Retirees willing to tolerate an 85% success rate could reasonably take 3.7% of a balanced portfolio initially, and retirees who are willing to live with an 80% success rate (meaning a 20% chance of running out prematurely) could take out 3.9% to start. 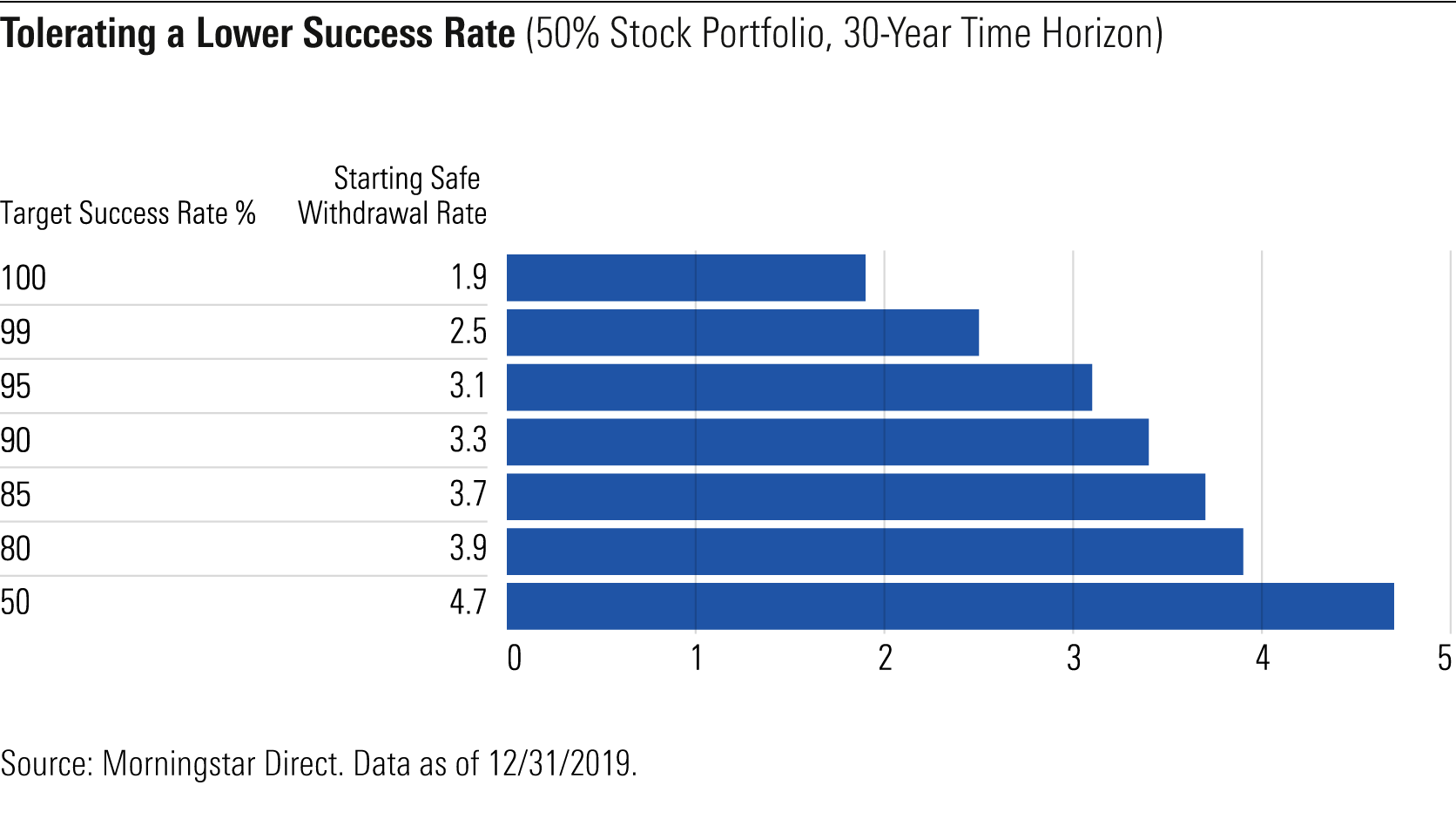 Forgoing inflation adjustments--at least in part--is another lever. That might seem farfetched in the current environment, given that inflation is top of mind. But research from David Blanchett, formerly of Morningstar but now at PGIM, has demonstrated that retirement spending doesn't necessarily track inflation and often trends down throughout the lifecycle. Our research shows that the retiree who adjusts his or her paycheck by just 75% of the actual inflation rate would be able to take a starting withdrawal of 3.6%, for example.

The Pros and Cons of Flexible Retirement Spending Systems

Finally, retirees can achieve meaningful increases in starting safe withdrawal rates and lifetime withdrawals by being willing to depart from fixed real withdrawals and instead embracing variable retirement spending systems.

In our paper, we looked at a few of these systems, ranging from very basic to more complex. We analyzed four different variable withdrawal approaches:

We found that even modest adjustments to a fixed real withdrawal system--for example, forgoing inflation adjustments following years in which the portfolio has posted a loss--support higher starting and lifetime withdrawals than a fixed real withdrawal system, as shown in the chart below. Being willing to make more significant adjustments--taking less after a portfolio has declined and more when it has increased--can lead to meaningfully higher starting safe and lifetime withdrawals. 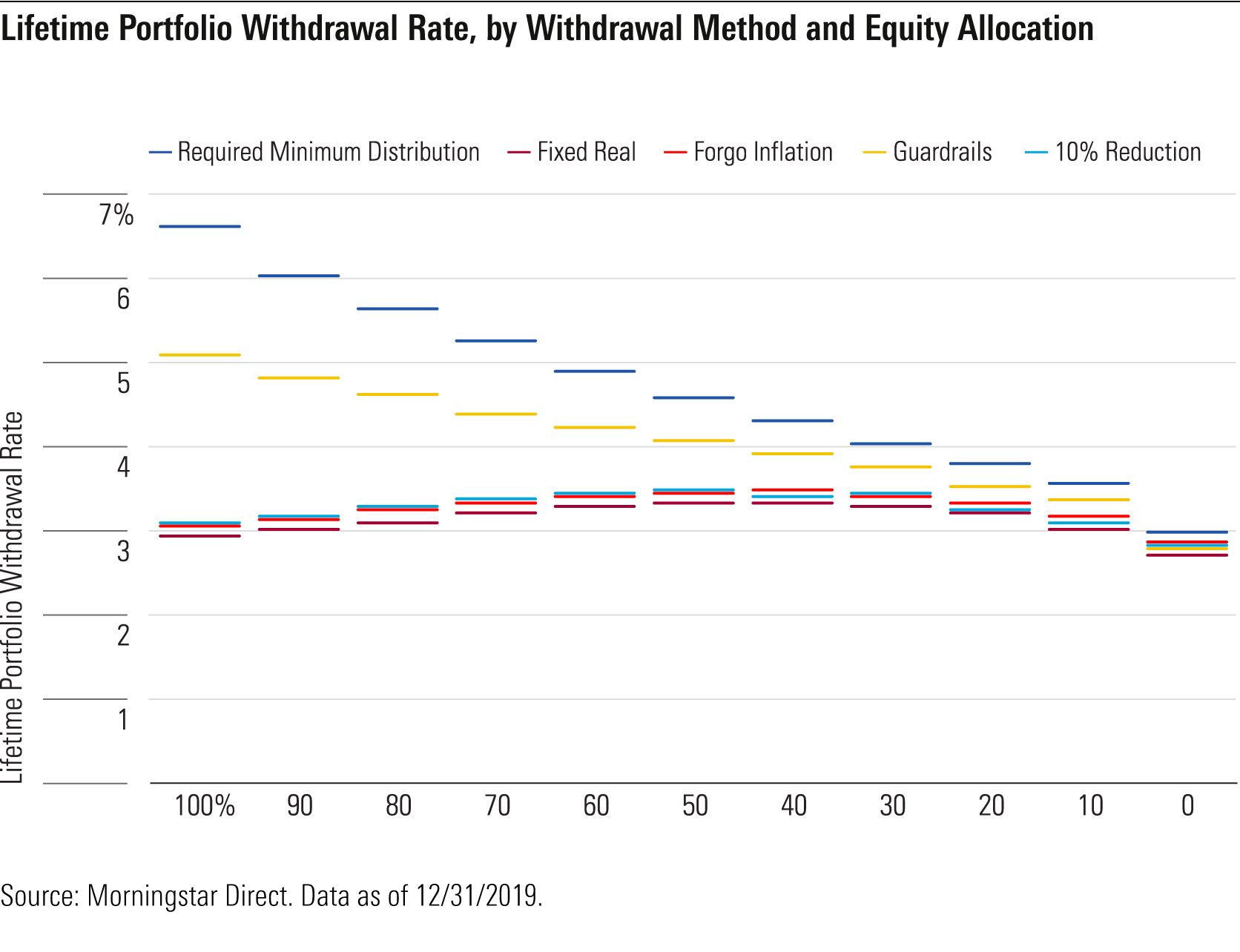 Yet, it's also important to note that variable withdrawal systems aren't a free lunch. Our research examined the trade-offs that can accompany variable withdrawal systems, especially cash flow volatility, which can affect retirees' quality of life, and ending balances. Variable systems inherently introduce more volatility in retirement spending, and they also tend to contribute to lower ending balances than would be the case with a fixed real withdrawal system. From that standpoint, they'll tend to be less appealing for retirees seeking a high degree of consistency in their year-to-year cash flows as well as those with a strong bequest motive.

The first chart in this article depicts the interplay between starting withdrawal percentages and cash flow volatility for various withdrawal methods. The fixed real (Bengen) method features the lowest starting withdrawal percentage but with the benefit of completely predictable cash flows that track inflation. The guardrails system, pioneered by financial planner Jonathan Guyton and computer scientist William Klinger, meanwhile, greatly enhances starting safe withdrawal and lifetime withdrawal amounts, but introduces variability in how much the retiree can spend each year.

In the end, the "right" withdrawal system depends heavily on the individual retiree: his or her desire to maximize lifetime spending, preference for highly predictable cash flows versus those that are more variable, desired level of certainty around not running out, and bequest motive, among other considerations. Nonportfolio decisions are also a factor--for example, delaying Social Security and/or considering an annuity can help indirectly aid with withdrawal rates by reducing demands on the portfolio. In an environment that could prove challenging for new retires in the decades ahead, our research is meant to discuss the many levers they have at their disposal.

To learn more about practical ways that retirees can help make their savings last longer, sign up for our webinar.

Editor's Note: The starting withdrawal rate in Ex. 1 in this article was corrected.

To view the full analysis, download our report on The State of Retirement Income. Get My Copy