The Morningstar US Communication Services Index continues to outpace the broader market, with Internet giants Alphabet (GOOGL) and Facebook (FB) accounting for the lion’s share of this performance. While we expect the surge in digital advertising spending that has driven both stocks higher to continue, we believe valuations now largely reflect this outlook. 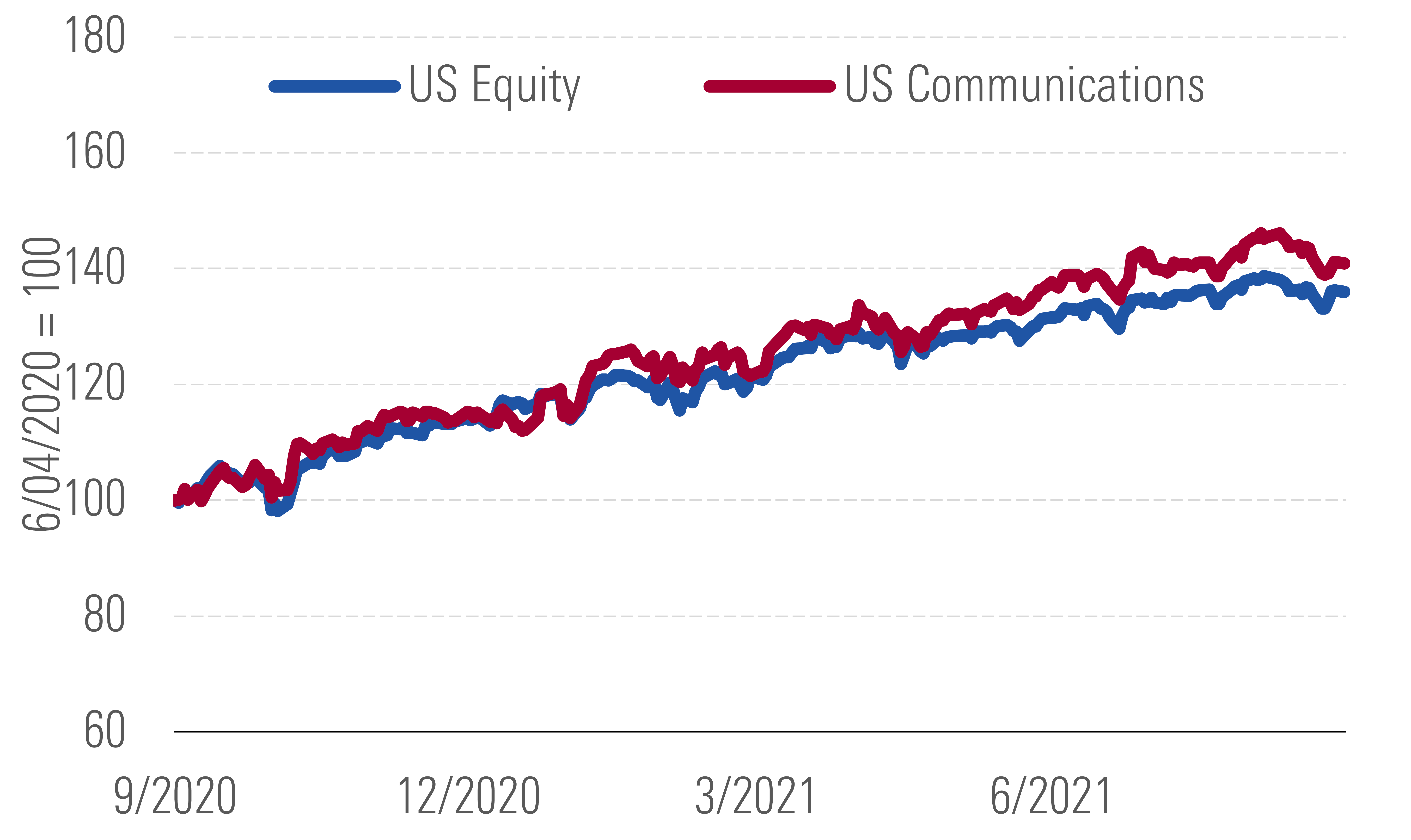 Alphabet and Facebook both trade within spitting distance of our fair value estimates, landing in 3-star territory. That said, we think Pinterest’s valuation remains attractive, making it our preferred way to gain exposure to digital advertising growth.

Exhibit 2: Each Segment of the Communications Sector Offers Opportunities. 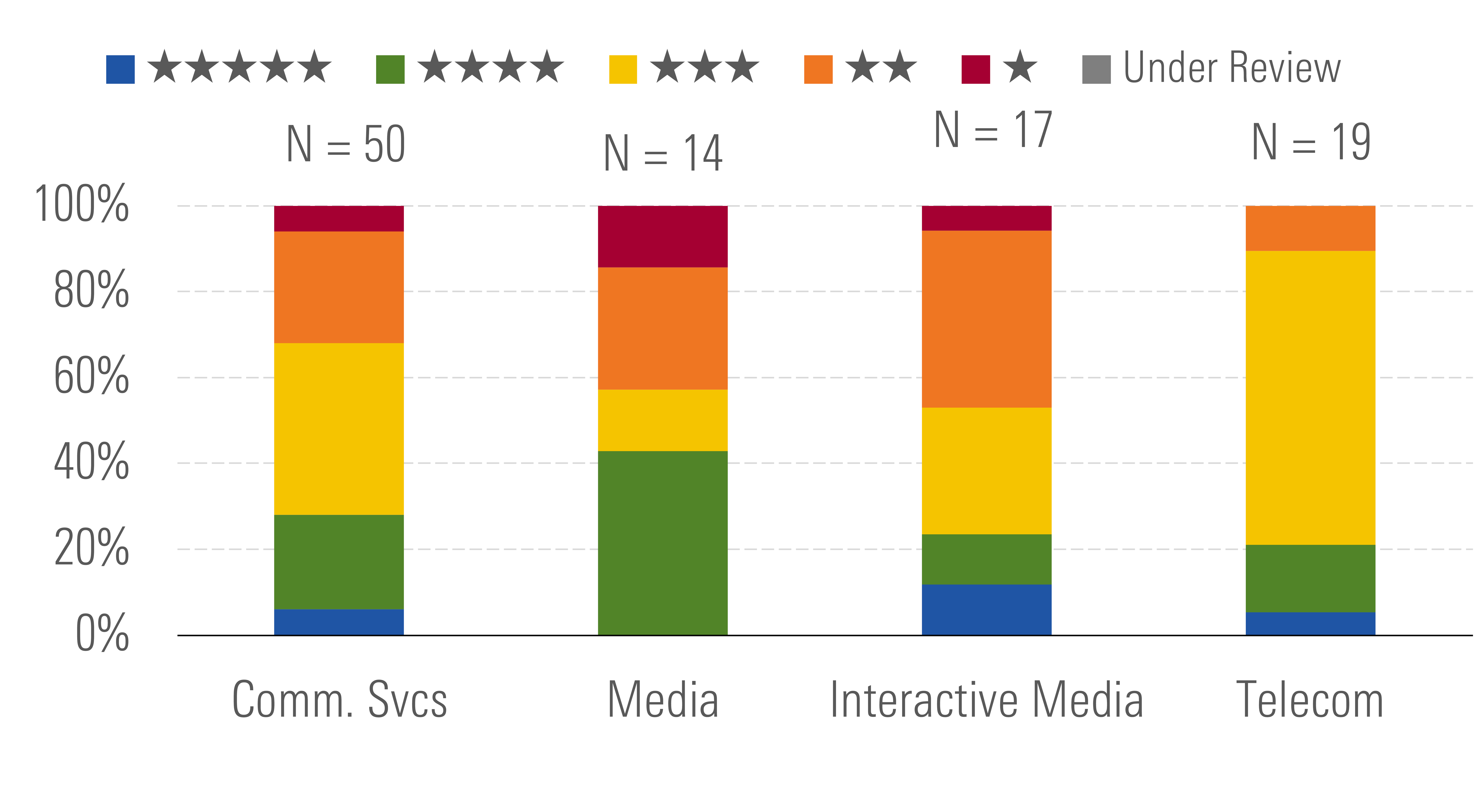 Video game stocks have been among the poorest performers in the sector: Shares of each of the four gamers we cover—Electronic Arts (EA), Activision Blizzard (ATVI), Take-Two Interactive Software (TTWO), and Ubisoft (UBI)—are down 10%-30% so far in 2021. These stocks ran up sharply during the early days of the pandemic, following along with the stay-at-home theme, but sentiment has clearly shifted, erasing most of those gains. 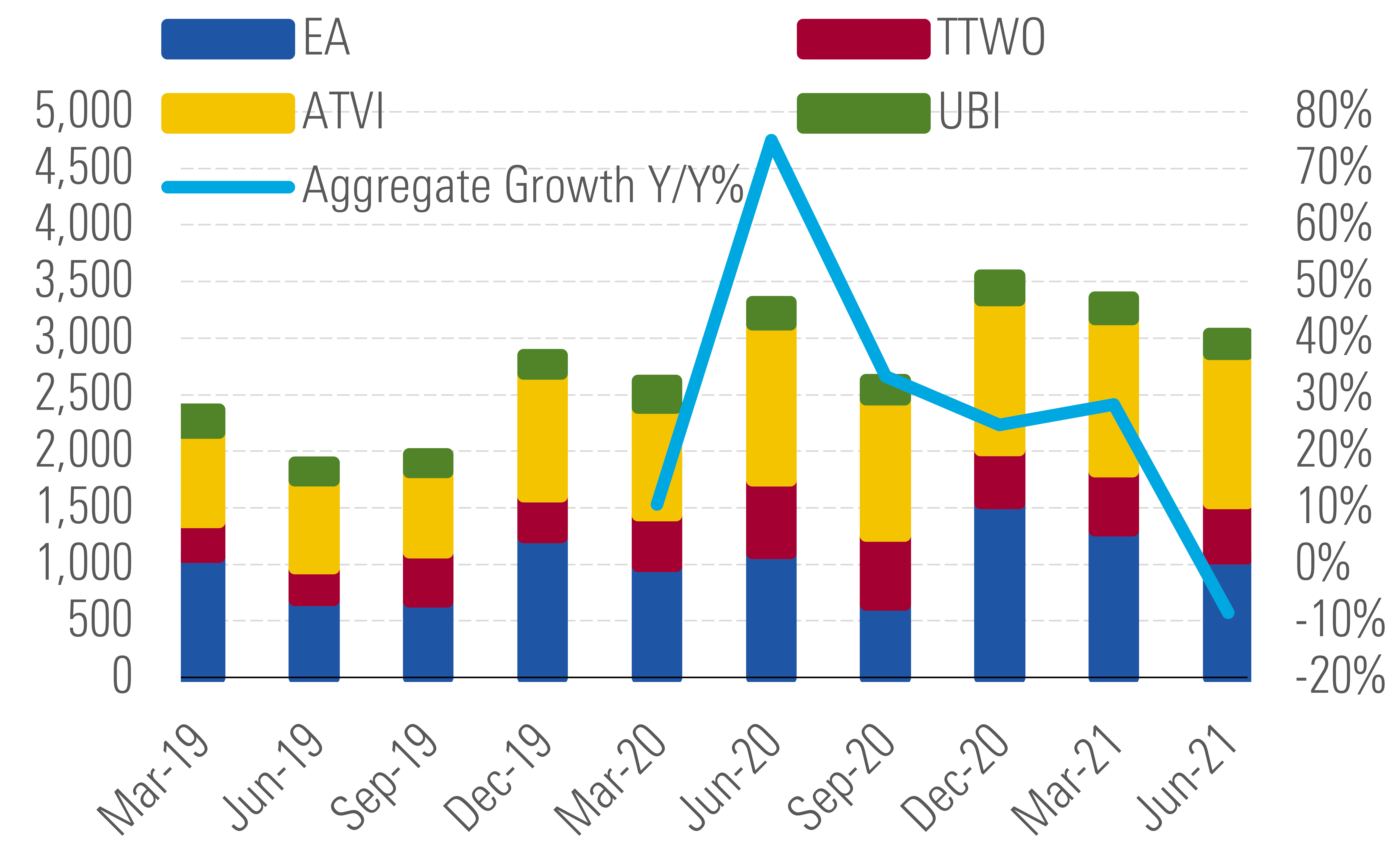 The amount of time and money spent on video games has certainly dipped versus 2020 but remains up solidly compared with before the pandemic. EA, for example, noted that fiscal first-quarter (ended June) net bookings for FIFA Ultimate Team and Madden Ultimate Team were up 47% and 115%, respectively, versus the same quarter in fiscal 2019. We believe long-term trends remain favorable for the video game industry and that firms with strong franchises and development prowess will prosper. With valuations looking more attractive, we think gaming stocks are worth a look.

Traditional telecom stocks have also come under some pressure recently, as some firms have signaled a slowdown in customer growth. Cable companies Comcast (CMCSA) and Altice USA (ATUS) have noted that broadband trends are lagging prepandemic back-to-school norms. The pandemic clearly pulled some broadband demand forward, so the relatively modest falloff these firms have seen isn’t surprising.

Exhibit 4: Altice Has Underperformed Cable Peers, Especially During the Pandemic 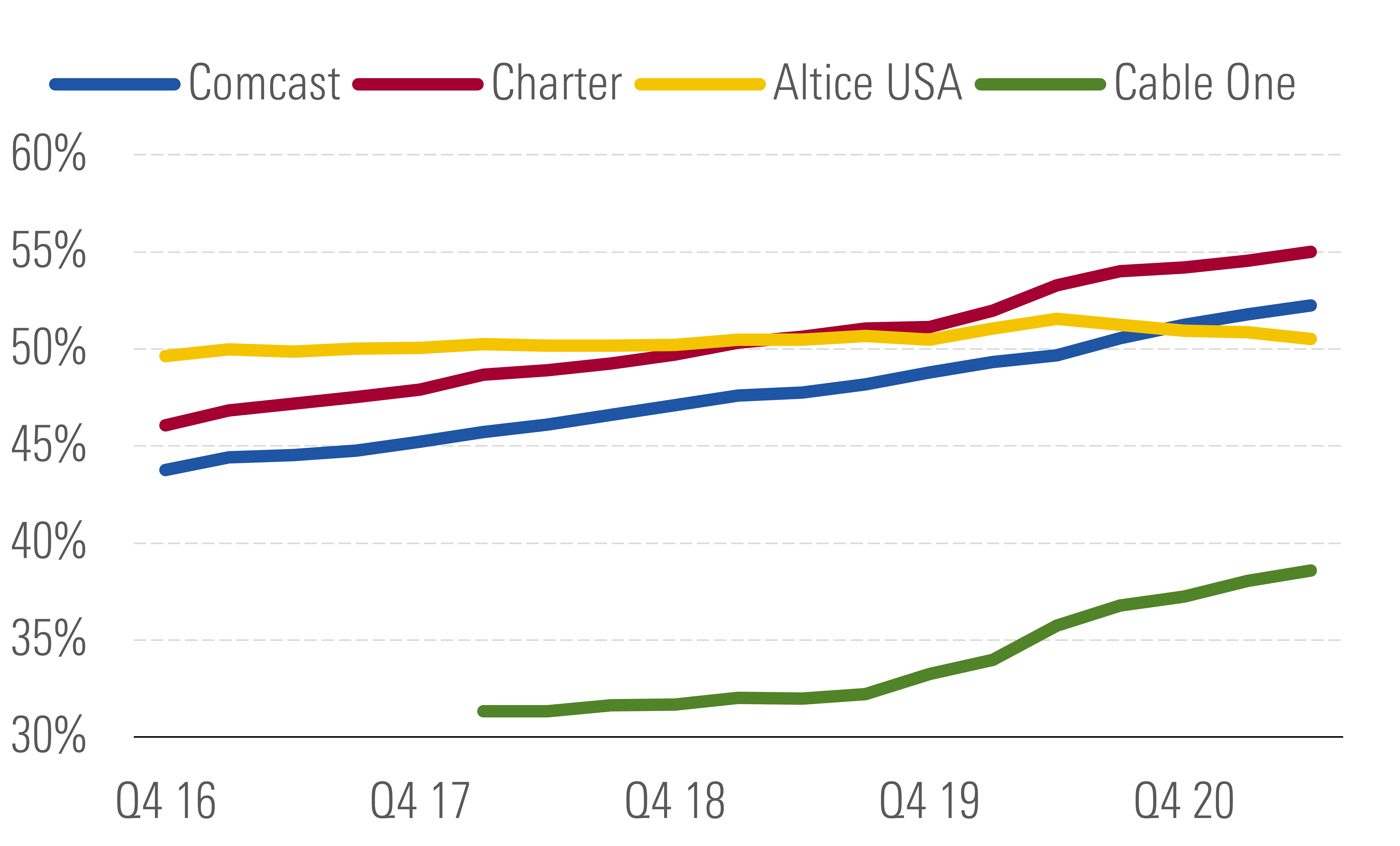 The market has hammered Altice USA, though, which we believe reflects both its somewhat weak operating performance and, more critically, the heavy debt burden it carries. We don’t expect Altice USA will significantly lag its cable peers over the longer term. The firm faces heavy competition from Verizon’s (VZ) FiOS, but we expect all cable firms to experience this as firms like AT&T (T) increase investment in fiber-optic networks.

We expect Pinterest to benefit from the return of brand advertising spending in addition to growth in e-commerce as the economy continues to recover from the pandemic. The firm also should continue to attract direct-response advertising as most of its users access the app with the intention to purchase immediately or in the future. The addition of try-on features has made engagement with ads stronger and conversion to actual sales more likely. We also think that increasing focus on video pins will bring more brand marketing campaigns onto the platform. All this is likely to drive top-line growth and margin expansion for the firm.

AT&T has been in investors’ penalty box for some time, and rightly so, in our view. However, we believe management is putting the firm on the right path, bringing a much-needed telecom focus. We expect the wireless business will deliver consistent, albeit modest, growth, allowing cash to remain solid after the Warner spin-off. Increased fiber investment should also provide revenue growth and some differentiation versus rivals. We also believe HBO Max has built strong momentum that will solidify its place in the living room as Warner joins with Discovery. Even with the dividend reduction, we expect the stock will deliver a 4%-5% yield.

Take-Two remains well positioned to capitalize on the long-term secular trends driving video game growth, including widening the monetization window and lengthening the revenue tail for games. Despite recent announcements delaying game launches, Take-Two has a strong historical record for releasing high-quality titles, including major franchises like Grand Theft Auto, NBA 2K, and Red Dead Redemption, which we expect to create even more value for shareholders moving forward, as earnings grow rapidly following a lull in fiscal 2022. We think that the current share price offers good entry point versus our $200 fair value estimate.

Michael Hodel does not own (actual or beneficial) shares in any of the securities mentioned above. Find out about Morningstar’s editorial policies.