Editor's note: This article was originally published on Sept. 17, 2021.

The green energy future has arrived.

Energy accounts for 80% of U.S. greenhouse gas emissions, making the energy sector the top target of any plan to fight climate change--and reimagining energy's role in society will have substantial financial and geopolitical consequences.

Understanding where the risks and opportunities reside is part of the art of creating a portfolio. At Morningstar, we've identified six distinct approaches to sustainable investing, a critical part of investing around climate change, to help investors address those risks and take advantage of the possibilities for future profits. They are: apply exclusions; limit environmental, social, and governance risk; seek ESG opportunities; practice active ownership; target sustainability themes; and assess impact.

Here's a look at our expectations for U.S. utilities' green energy future.

We forecast that clean energy--including renewable energy, hydro, and nuclear--will grow to 65% of U.S. electricity supply by 2030. As shown on the chart below, this is a substantial increase from 2020, when clean energy stood at 40%. 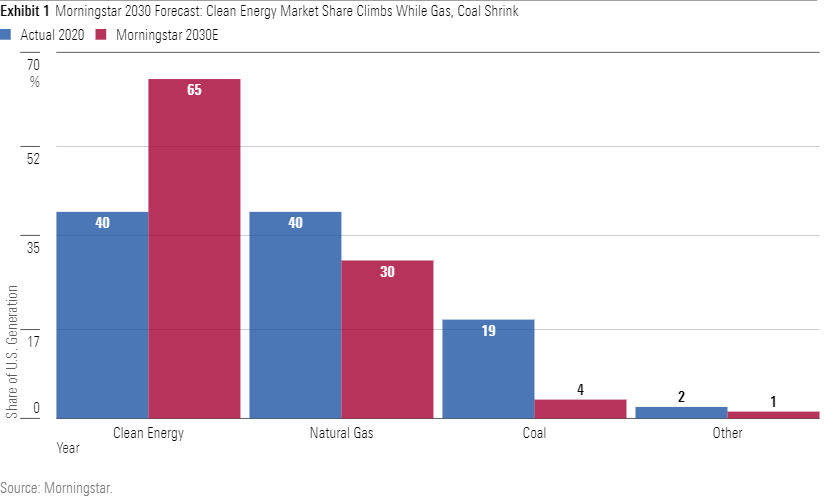 This is more bullish than other forecasts, as ours incorporates more coal plant closures, wind and solar growth, small-scale solar, and clean energy imports.

Still, even our bullish forecast means that a huge gap needs to be filled between 2030 and 2035 in order to fulfill President Joe Biden's goal of decarbonizing the power sector by 2035.

His aggressive plan would require the United States to triple its current carbon-free generation. And constraints to doing so include finance, manufacturing, developing the necessary number of wind and solar projects, and electric grid reliability.

Fulfilling this goal will require substantial investment along the entire energy value chain, from manufacturers to utilities to renewable energy developers.

How Will Utilities Drive the Clean Energy Transition?

Utilities will play an essential role in eliminating as much as 75% of the energy sector's carbon emissions through decarbonization of the electric power sector and full or partial electrification of transportation, residential and commercial buildings, and small manufacturing.

New solar and wind generation investment will be the key drivers of the sector's clean energy transition. We forecast that by 2030, utility-scale wind and solar will more than triple to 1,530 terawatt-hours, or 33% of total generation.

Wind generation may have led the first wave of renewable energy investment, but developers are quickly shifting capital investment toward solar. Solar represents roughly two thirds of all planned renewable energy projects during the next three years, as shown below. 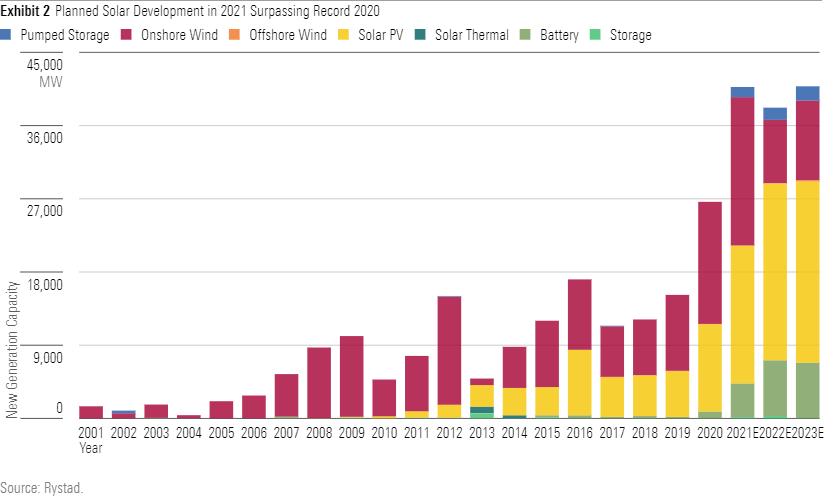 Solar is gaining popularity for a few reasons:

While we expect solar generation to take the lead in the 2020s, wind will still play a critical role in the clean energy transition. Wind energy doesn't always coincide with peak electricity demand in the way that solar does, but it does pair well with the seasonality of solar.

Who's Investing in the Renewable Energy Transition?

One critical factor in the speed and scale of this transition is corporate demand for renewable energy. We expect business electricity demand to start growing again as the economy recovers from the pandemic, creating an expanding base for renewable energy demand.

Particularly, we expect the technology and consumer sectors to invest considerably in renewable energy to keep pace with their environmental goals. For example:

What Else Will the Clean Energy Transition Require?

Building out solar and wind infrastructure is only part of the path to net-zero emissions--there are several other pieces of the puzzle that represent additional investment opportunities for utilities:

What Could Hold Back the Clean Energy Transition?

While the clean energy transition is happening, there are challenges and risks to our forecast that utilities must address. These include:

Download the full Morningstar Utilities Observer to see our latest U.S. market insights. Get My Copy

Travis Miller does not own (actual or beneficial) shares in any of the securities mentioned above. Find out about Morningstar’s editorial policies.