Financial journalists often mention salary-based rules of thumb--such as those published by Fidelity and other asset-management firms--for retirement savings. (Note: While Christine Benz has pointed out some of the shortcomings of using income replacement rates as part of retirement planning, they're still widely used by individual investors and can be useful as a mental shortcut or heuristic to figure out if you're on track for retirement.)

These guidelines can be appealing because of their simplicity but also daunting for investors who may find themselves running far behind. On a more skeptical note, it’s also worth noting that asset-management firms (and most financial advisors) have a vested interest in getting investors to save more because higher balances translate into higher fees. In this article, I’ll run through some numbers to test whether these guidelines are reasonable and dig into the assumptions behind them. I’ll also explain why they might not be an accurate benchmark for every investor.

Fidelity’s salary benchmarks are probably the best-known retirement guidelines. The company recommends that retirement savers aim for saving a certain multiple of their salaries, as shown below. 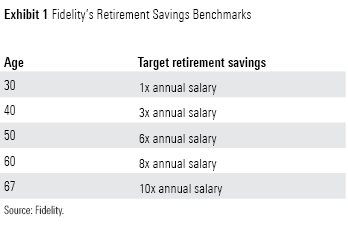 Fidelity’s website provides more details about the assumptions behind these targets. They assume 1.5% constant real (after inflation) wage growth, a 15% annual savings rate, retirement at age 67, a life expectancy of 93, and an average income replacement target of 45% of pre-retirement income. Fidelity ran a series of simulations (a Monte Carlo test of 10,000 scenarios) based on historical market data to come up with a 90% success rate.

I ran a simple year-by-year test to see how these numbers might play out. I ran the data for a hypothetical investor starting at age 25 with zero savings and a $60,000 salary. Each year, I bumped up the investor’s salary by 1.5% and assumed a 15% savings rate. Because that’s a pretty diligent savings rate, it wasn’t too hard to meet the targets. The table below shows a summary of how the numbers played out. (Note: My test is only a back-of-the-envelope estimate because it assumes a consistent return level during each decade; a more sophisticated test would incorporate multiple scenarios around an average.) I also experimented with various rates of return to see what would bring the total closest to the target level for each decade.

The table below shows my year-by-year estimates, along with the required rate of return to meet the target savings level for each decade. Because Fidelity's estimates don't explicitly account for inflation, the rates of return shown are real (not including the effect of inflation).

One key point that becomes apparent from this exercise is that while salary-based savings targets might seem daunting, they’re eminently achievable for investors who start early and just stick with it. (That’s probably the point: Fidelity was likely trying to encourage people to save for retirement without setting impossible targets.) None of the savings benchmarks required unusually high rates of return; if anything, the required real returns are on the conservative side. Probably the biggest stretch is assuming that young employees can save 15% of their salaries right out of the gate, which might not be realistic.

It’s also interesting to note that the required returns for each decade are nonlinear. You might expect required returns to steadily decrease as age-based asset allocations gradually shifted more toward fixed-income securities, and in fact, Fidelity’s footnotes on the methodology mention that the assumed rates of return are based on the glide path for a typical target-date fund.

However, a Fidelity spokesman confirmed that the nonlinear pattern partly reflects the effect of rounding the target savings milestones to match an even multiple of salary, as well as the fact that it started by calculating the final target dollar amount and required savings rate and then derived the milestone numbers. As mentioned earlier, Fidelity also ran numerous market simulations to test for a 90% confidence level, which means the actual rates of return behind the target levels are likely different from the numbers in my simplified test.

What the Numbers Mean for Retirement Income

Overall, the salary-based targets look reasonable, but what do they mean for retirement income? Fidelity uses a target income replacement rate of 45% from portfolio withdrawals. Fidelity’s numbers also assume Social Security income starting at age 67, which investors can use to supplement retirement withdrawals. The chart below shows how these income estimates translate into actual dollars.

The annual income requirement of about $50,500 translates into a roughly 4.5% portfolio withdrawal rate--which is a bit higher than the often-cited 4% rule. That’s likely because Fidelity’s assumed retirement horizon spans only the 26 years from age 67 to age 93, which is shorter than the 30-year period assumed for most withdrawal rate studies. Investors who want to retire earlier or plan for a longer life span will probably want to ratchet down planned withdrawals and bump up the savings target at retirement to account for a longer time horizon.

Salary-based savings benchmarks won’t work for everyone. They assume a consistent salary that gradually inches up over an investor’s entire career, but many workers have salaries that follow a more jagged pattern, with bigger raises some years and drop-offs in other years, especially for individuals who take time off to raise a family or care for elderly parents. Some people who pursue advanced professional degrees may also need to steer more income toward student-loan payments in their 30s and catch up on retirement savings later.

In addition, some people might not feel a need to tether their retirement savings to their pre-retirement salary level. A variety of studies have found that investors often do prefer to keep post-retirement spending consistent with pre-retirement spending levels, but that doesn’t apply to everyone. To get a more accurate estimate of what you’ll need in retirement, it’s best to look at spending from the bottom up by estimating each year’s costs for major items such as food, shelter, clothing, travel, healthcare, and other expenses. It’s also important to budget for bigger nonrecurring costs such as buying cars, vacation homes, or chipping in for weddings or other milestone events for younger family members.

That said, salary-based benchmarks are a reasonable starting point. Their greatest value lies in reinforcing the importance of starting early and being consistent to build a healthy retirement portfolio.