Long-term mutual funds and exchange-traded funds gathered $72 billion in July, a step down from June's $109 billion and behind the average pace of $121 billion per month in the record-setting first half of 2021. Passively managed strategies pulled in $57 billion, mostly due to ETFs' $49 billion inflow, while actively managed funds collected about $15 billion.

While active funds have seen stronger demand in 2021, including positive flows in every month through July, their inflows are still just a blip on the radar relative to passive strategies, which continue to take market share. 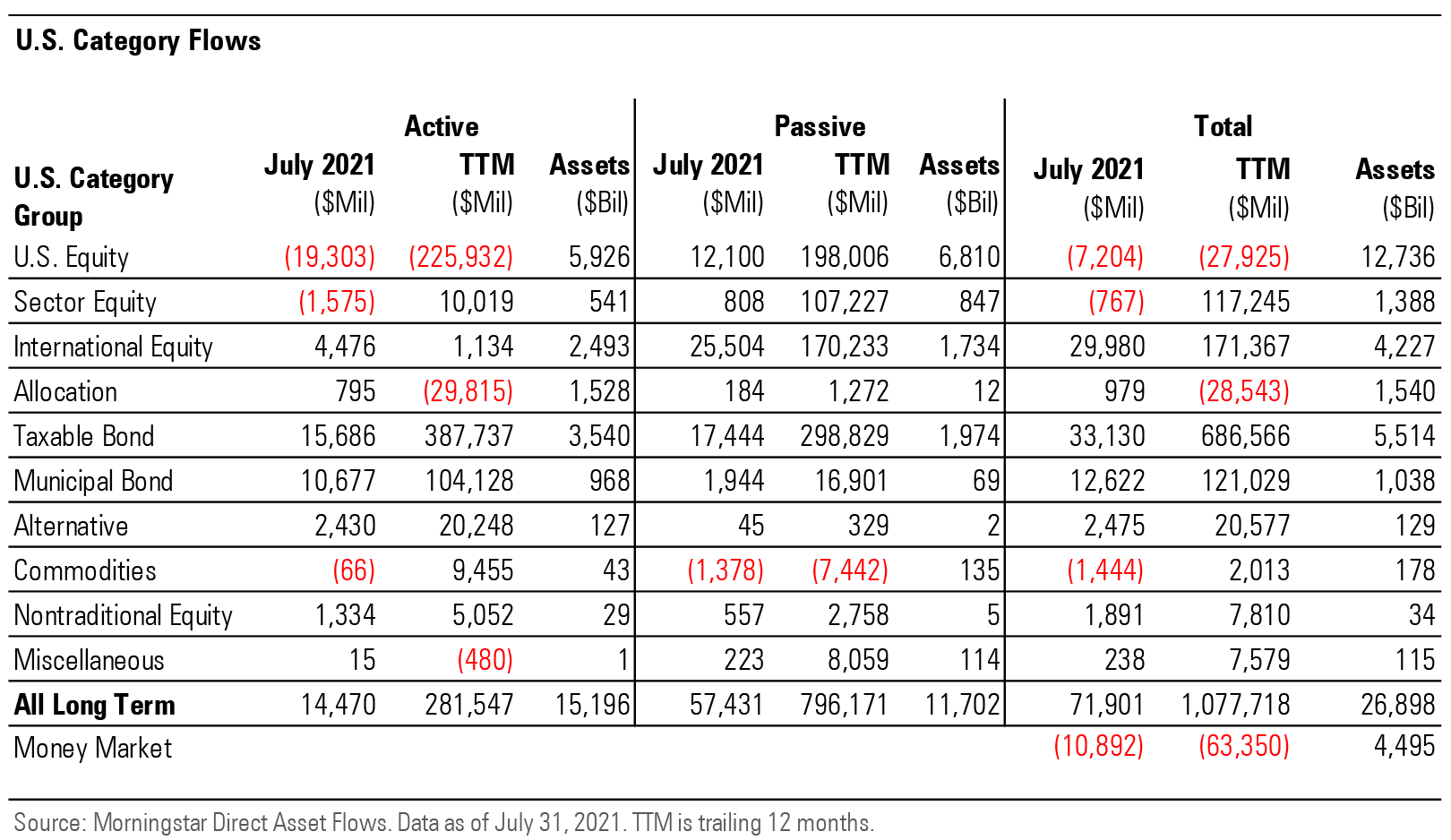 The shift is reflected in the market's choice of investment vehicles. ETFs, which are nearly synonymous with passive management (96% of ETF assets are passively managed), continue to dominate U.S. equity fund flows and have also made headway in other sectors deemed to be more friendly to active management. Over the 10-year period ended July 2021, U.S. equity ETFs took in an astonishing $1.2 trillion, while open-end funds shed nearly $1.3 trillion. International-equity open-end funds managed to pull in positive flows over the same period, but they represented just 37% of the group's total inflows. Taxable-bond funds fared better, with 61% of inflows accruing to open-end funds, though ETFs are slowly taking share.

The month of July was a microcosm of the broader trends as investors fled active U.S. equity funds, favored passive international funds, and were evenly split across taxable-bond funds. 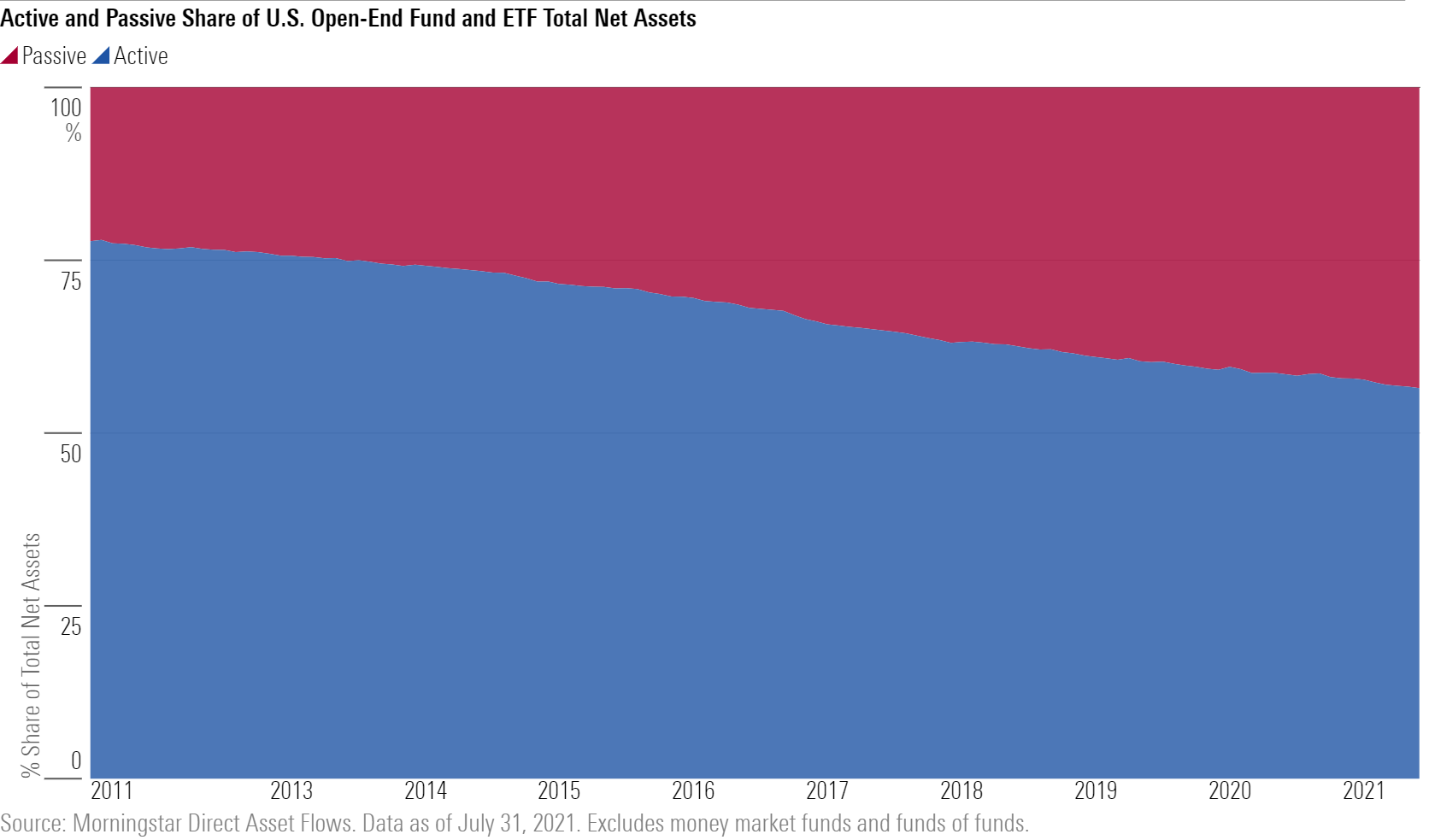 July saw U.S. equity funds post their first month of outflows since January as they shed $7.2 billion, though they had already lost momentum following a record intake in March. Heavy interest in value funds propped up the category group's results in 2021--but that changed in July. Large- and small-value funds both suffered outflows for the first time this year, with small-value's $3.6 billion exodus registering as a record on an absolute basis in data going back to 1993.

Enthusiasm for funds in other U.S. equity categories wasn't much stronger in July. Investors redeemed most heavily from growth funds, with mid-growth funds suffering the steepest outflows at $3.5 billion. Small- and mid-blend categories also experienced outflows, though large-blend funds took in $7.9 billion, led by flows into index-tracking funds and, more notably, funds with environmental, social, and governance considerations. Large-blend funds with sustainability mandates incorporated into their prospectus, as measured by Morningstar, gathered $3.3 billion of the $7.9 billion total, headlined by iShares ESG Aware MSCI USA ETF (ESGU), which took in $1.9 billion. 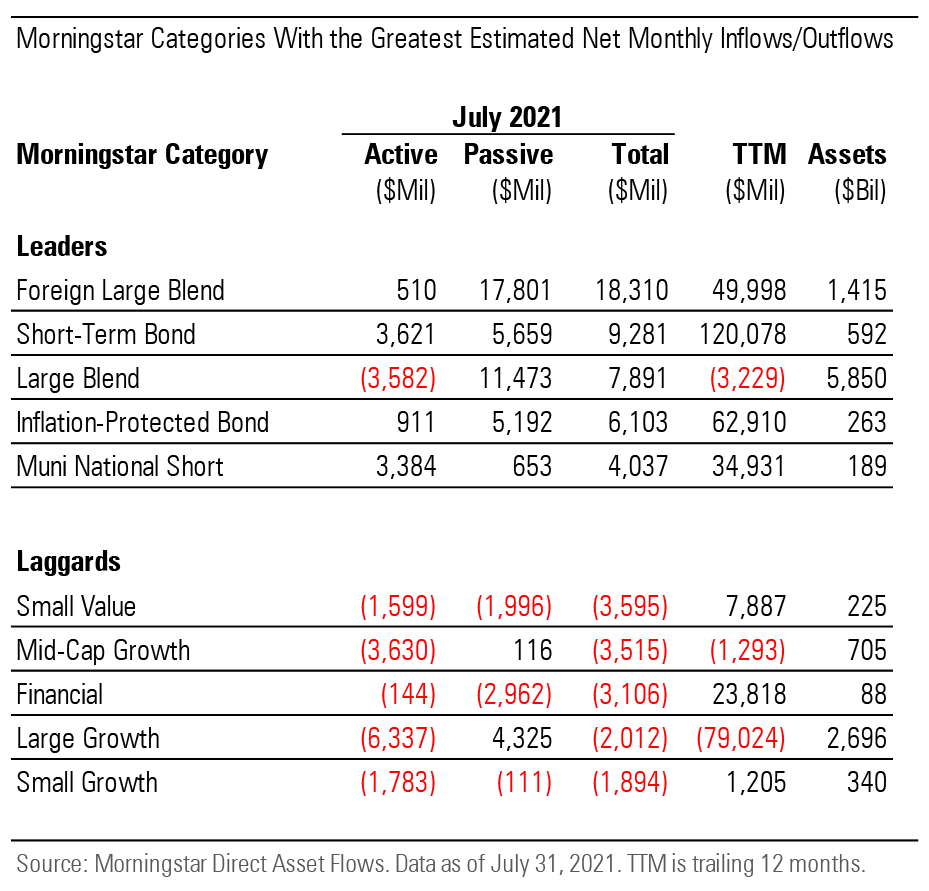 Just as investors shunned diversified value-equity funds in July, they followed suit in sector-equity funds. Morningstar Categories bleeding the most assets in July included value-oriented sector funds that previously posted some of the strongest inflows through the first six months of the year. Financial funds shed $3.1 billion after taking in nearly $23 billion over the first half of the year--the highest total within the group. Equity energy funds dropped $1.1 billion, their first monthly outflow since September 2020. Natural-resources funds shed about $1 billion after collecting positive flows for 10 consecutive months (including a record $4.0 billion in May).

Demand for international-equity funds remained strong in July as they collected $30 billion, marking their ninth consecutive month of inflows. They've now taken in $171 billion over the trailing 12 months, the most of any equity category group. Interest in categories such as diversified emerging markets and foreign large blend remained strong. 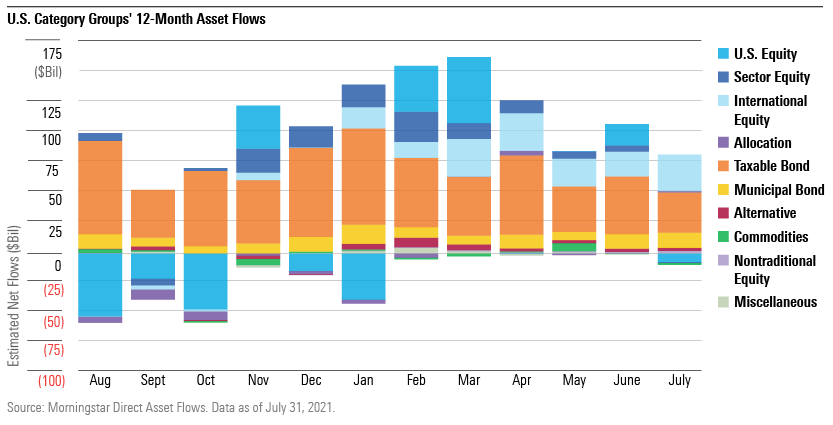 Taxable-bond funds gathered $33 billion in July. While that was tops among category groups, it was their lowest intake since March 2020, when they shed $242 billion. Contrary to the shift in sentiment around U.S. equities, taxable-bond flows largely continued their existing trends in favor of strategies offering protection from rising interest rates. Investors plowed more money into inflation-protected bond funds, which collected $6.1 billion in July, second only to the much larger short-term bond-fund category's $9.3 billion intake. Bank-loan funds gathered $2.4 billion, their eighth consecutive month of inflows.

Among the largest asset managers, passives titan Vanguard took home by far the most assets in July, pulling in about $36 billion. Fidelity collected the second most with $7.6 billion, thanks to passive offerings such as Fidelity 500 Index (FXAIX) and Fidelity International Index (FSPSX). The firm's active offerings shed $3.5 billion, however, as investors redeemed most heavily from its U.S. equity and commodities funds. 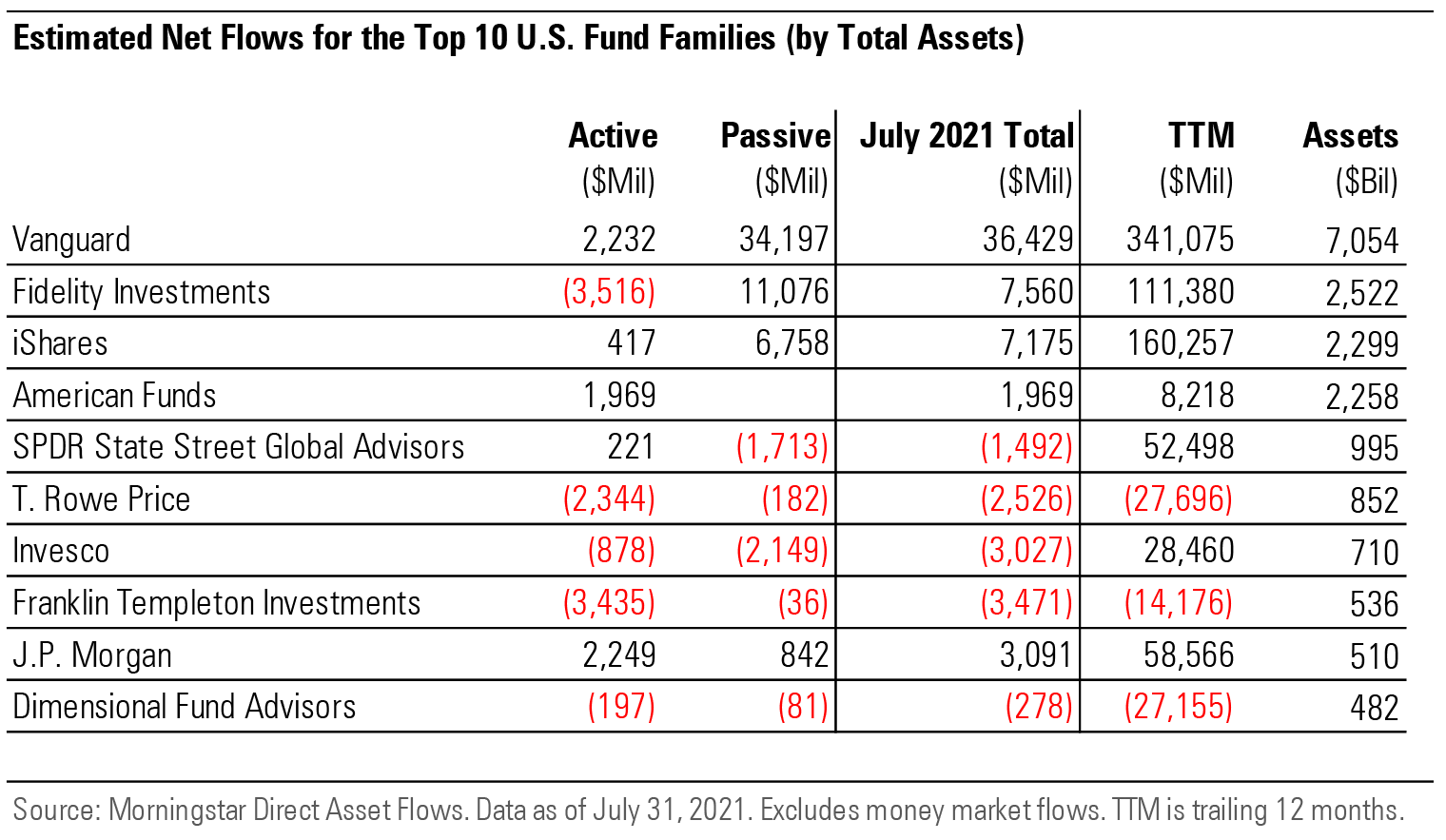 Smaller shops in terms of total net assets had strong showings in July, too. Schwab ETFs took in the fifth most of any fund family with $2.8 billion of inflows, all of which went into passively managed funds. BlackRock took home $2.7 billion, driven by flows into its active offerings, most notably within the taxable-bond category group.

Note: The figures in this report were compiled on Aug. 11, 2021, and reflect only the funds that had reported net assets by that date. Morningstar Direct clients can download the full report here.