Long-term mutual funds and exchange-traded funds gathered $106 billion in June 2021, up from May's $83 billion. Through the first six months of the year, investors plowed $722 billion into those funds, the largest semiannual total in Morningstar data going back to 1993 and far ahead of the next highest mark of $394 billion from the first half of 2017. Passively managed strategies pulled in $81 billion, mostly due to ETFs' $78 billion haul. Actively managed funds, by contrast, gathered only $25 billion.

Taxable-bond funds once again gathered the most assets among all category groups with a $48 billion intake in June, bringing their year-to-date collection to almost $344 billion. Unlike equity funds, investor interest in actively managed bond strategies tends to be much stronger. Active taxable-bond offerings picked up $25 billion in June versus passive funds' $23 billion.

Among Morningstar Categories within the group, short-term bond funds led the way, collecting $11.7 billion in June, a near-record for the category. Those funds are typically less sensitive to movements in interest rates than longer-duration offerings. Corporate- and high-yield bond funds continued to be the exception to an otherwise strong stretch of inflows for taxable-bond funds: They are the only categories with meaningful outflows so far through 2021. 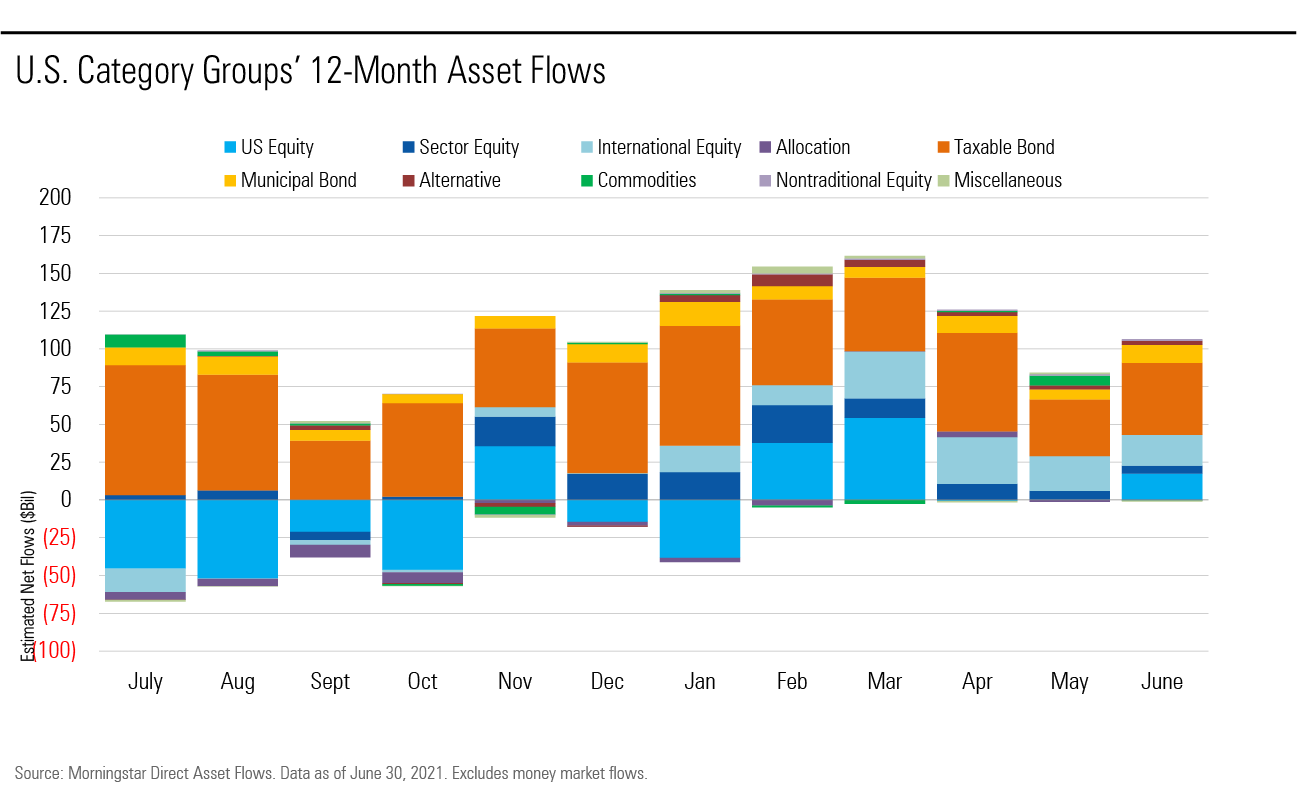 Though they are smaller than most other category groups, alternative and nontraditional equity funds have posted the highest organic growth rates through the first half of the year as well as the trailing 12 months. A decline in bond yields may explain some of the trend as investors could be seeking alternatives to bonds without taking on full equity market risk. Alternative funds took in $2.7 billion in June.

U.S. equity funds collected nearly $18 billion in June after two straight months of muted flows. Regardless of style or size, investors continue to make it clear that they prefer passively managed funds in this category group. Through the first half of 2021, actively managed U.S. equity funds shed more than $88 billion while passive funds raked in $161 billion. The largest beneficiaries included passive giants Vanguard and iShares. Vanguard 500 Index (VFINX) led the way with over $15.0 billion of inflows during the period, followed by Vanguard Total Stock Market Index (VTSMX) with $14.0 billion and iShares Core S&P 500 ETF (IVV) with $12.6 billion. 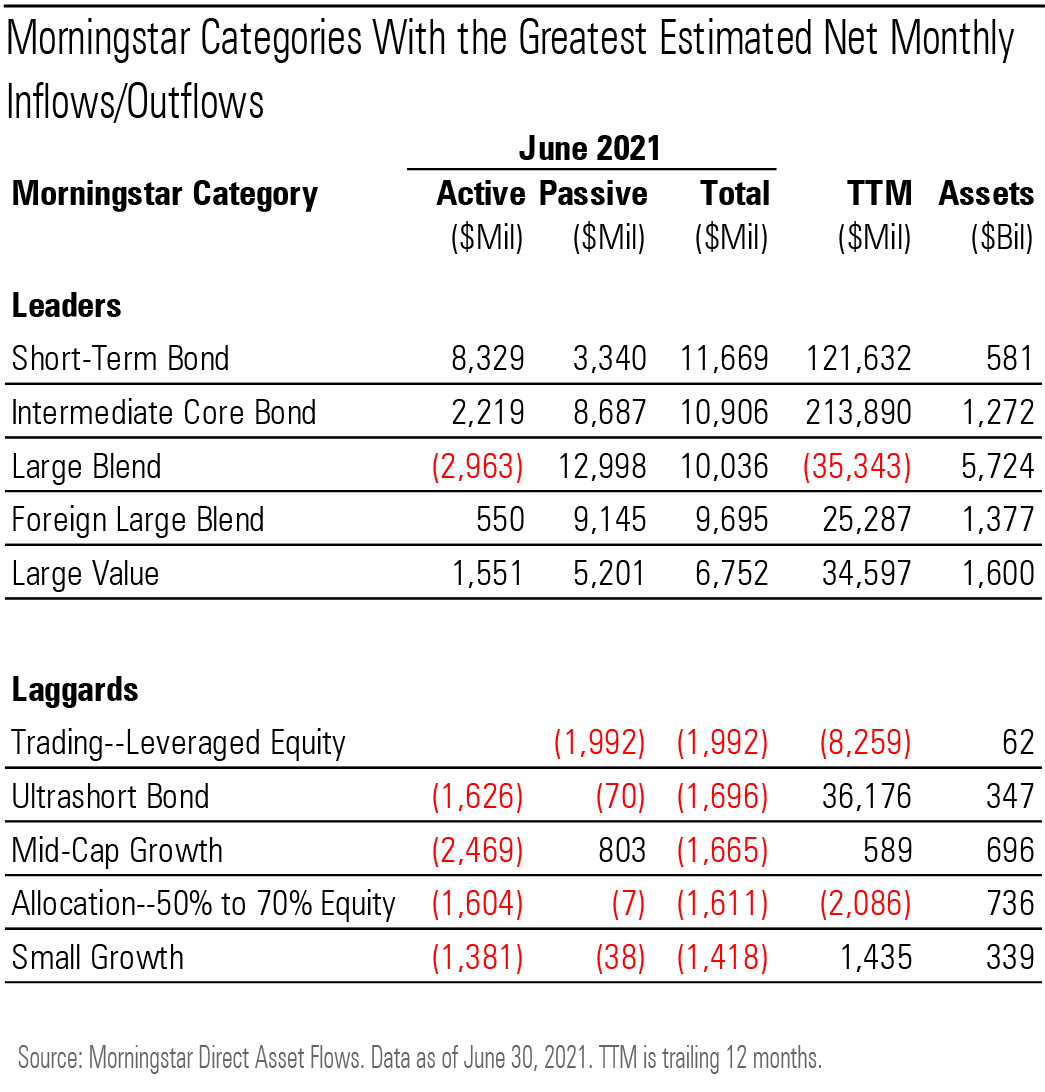 While large-growth equity funds posted positive flows for just the eighth month in the past 36, small- and mid-growth funds saw outflows of $1.4 billion and $1.7 billion, respectively. Through the first six months of the year, large-growth funds were the only U.S. equity category with negative flows and had the steepest outflows over the trailing 12 months. 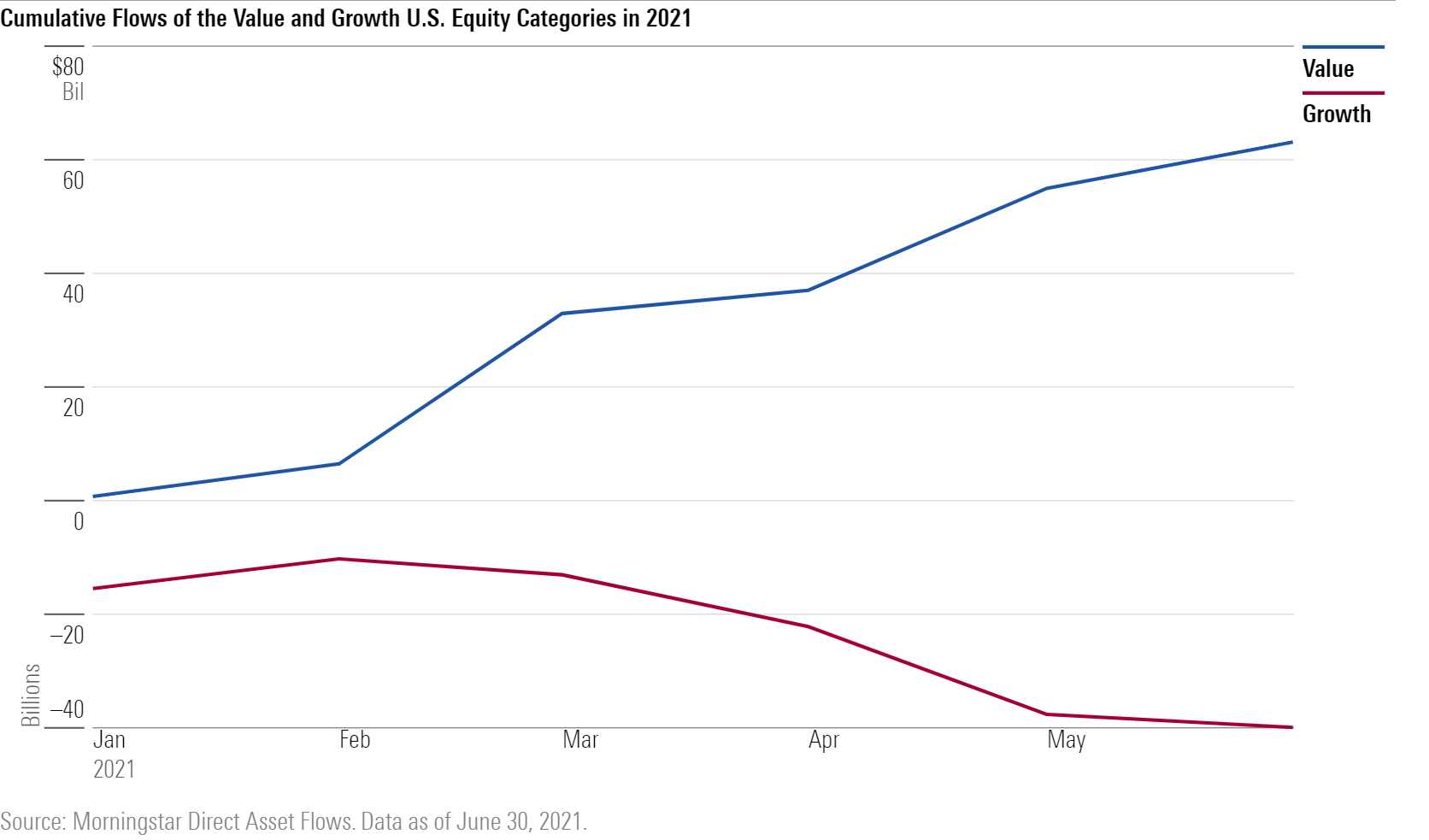 Flows into passive strategies once again eclipsed assets gathered by active strategies among the largest asset managers in June. Industry behemoth Vanguard led the way, collecting $25 billion for the month, most of which was in the firm's passive taxable-bond offerings. IShares saw the next largest inflow; the passives-focused fund family gathered close to $18 billion in June as its international-equity offerings garnered attention. 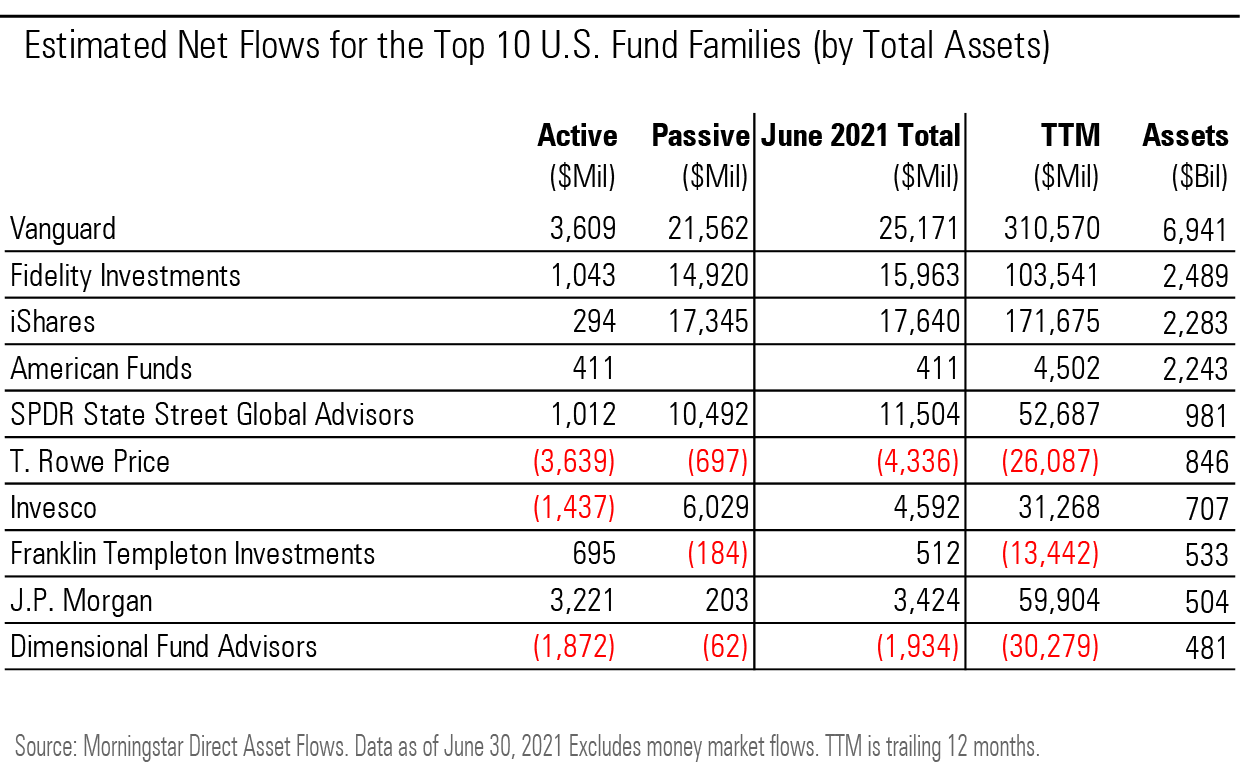 Fidelity saw the third-largest intake for the month, and most of its nearly $16 billion of inflows entered the firm's passively managed U.S. equity and international-equity strategies. American Funds, the only exclusively active firm among the top 10 asset managers by total net assets, collected a modest $411 million in June, as flows into the firm's fixed-income offerings exceeded the roughly $1.4 billion shed from its allocation strategies.

Note: The figures in this report were compiled on July 12, 2021, and reflect only the funds that had reported net assets by that date. Morningstar Direct clients can download the full report here.

Adam Sabban has a position in the following securities mentioned above: IVV. Find out about Morningstar’s editorial policies.