The U.S. equity market continued its climb in 2021’s second quarter. From April to June, the Morningstar US Market Index reached all-time highs, gaining 8.4% after rising 6.0% in the first quarter. The United States pressed on with coronavirus vaccination efforts, though it did not reach President Joe Biden’s goal for 70% of American adults to have received at least one dose by July 4. Markets ended the quarter on a high note as investor enthusiasm about the bipartisan agreement on Biden’s infrastructure plan appeared to outweigh inflation concerns. Domestic stocks fared a bit better than foreign--the Morningstar Global Markets ex-US Large-Mid Cap Index gained 7.2% in the second quarter.

The second quarter saw a stylistic rotation favoring growth stocks following value stocks’ relative outperformance in the preceding months. The Morningstar US Growth Index gained 13.9% over the three-month period versus the Morningstar US Value Index’s 4.0% rise. Growth names that posted negative returns in the first quarter, such as Adobe (ADBE) and Roku (ROKU), made up for losses. Among the best-performing funds across all Morningstar Categories were large-growth strategies Principal Blue Chip (PBCKX) and Morgan Stanley Institutional Growth (MSEQX) (both with Morningstar Analyst Ratings of Silver), which gained 14.8% and 15.1%, respectively, and both benefiting from strong technology picks. Principal Blue Chip’s large stakes in Adobe and financial software firm Intuit (INTU) stood out. Morgan Stanley Institutional Growth reaped rewards from its outsize positions in software companies Shopify (SHOP) and Cloudflare (NET). Strategies that leaned most heavily into growth stocks, such as large-growth PGIM Jennison Growth (PJFAX) and mid-growth T. Rowe Price New Horizons (PRNHX), rode stylistic tailwinds to rank in their respective categories’ top deciles. On the other hand, funds favoring more value stocks than their peers struggled, such as Primecap Odyssey Growth (POGRX) and Longleaf Partners Small-Cap (LLSCX). 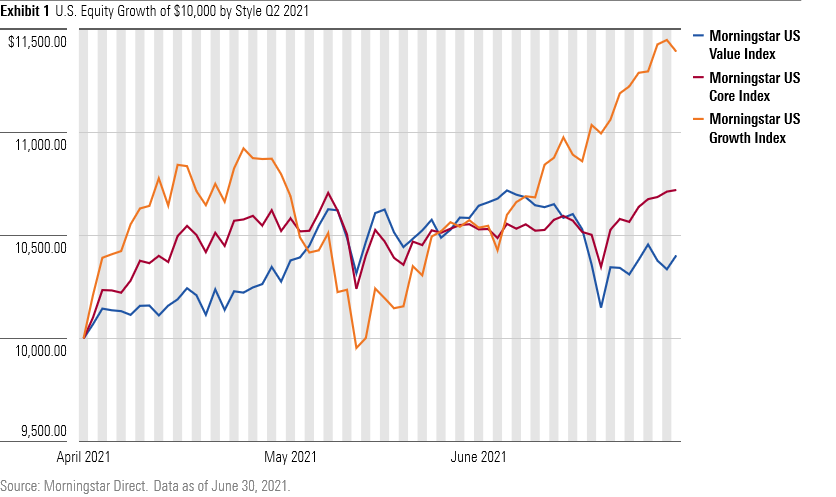 During the quarter, it seemed that the bigger the company’s market value, the better its stock performed: The Morningstar US Large Cap Index, Morningstar US Mid Cap Index, and Morningstar US Small Cap Index gained 9.2%, 7.2%, and 4.2%, respectively. An embrace of mega-cap stocks helped Silver-rated BNY Mellon Appreciation (DGAGX) outpace 98% of its large-blend Morningstar Category peers. As of April 2021, the strategy’s $338 billion average market capitalization was approximately 25% greater than its typical peer’s. Market titans Apple (AAPL), Microsoft (MSFT), Amazon.com (AMZN), Facebook (FB), and Alphabet (GOOG) accounted for 30.8% of its April portfolio versus the S&P 500’s 21.6% share. 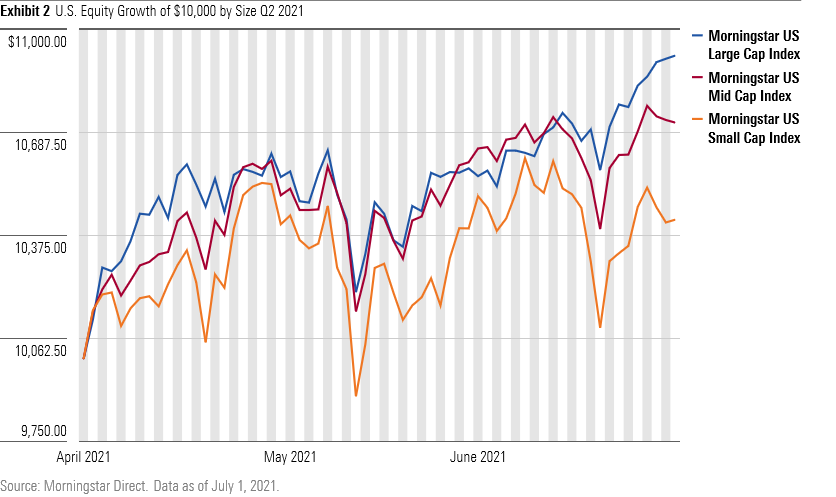 Energy was the Morningstar US Market Index’s top-performing sector. After climbing 30.8% in the first quarter, the average energy stock gained 11.9% in the second. All the sector’s industries outperformed the market; exploration and production stocks did best, gaining 17% for the month as crude oil prices climbed even further. Some strategies that had been hampered in recent years by long-standing overweights to energy, which had for several years been the market’s weakest-performing sector, showed strength in the second quarter. As of March 2021, Bronze-rated Poplar Forest Partner’s (PFPFX) 11.6% allocation to the sector was among the largest in the large-value Morningstar Category. The strategy’s substantial 3.3% stake in E&P firm Murphy Oil (MUR), in particular, helped it outpace 86% of peers in the quarter.

Value funds with smaller energy stakes lagged. Small-value Royce Special Equity (RYSEX) and mid-value Artisan Mid Cap Value (ARTQX), both of which entirely avoided the sector, finished in the bottom quintile of their respective peer groups. Royce Special Equity’s veteran managers have typically steered clear of energy names due to concerns about debt and revenue closely tied to commodity prices. Artisan Mid Cap Value, in contrast, sported a double-digit energy weighting as recently as third-quarter 2018. The strategy’s comanagers have brought the allocation down since then to instead favor communication services and consumer cyclical names.

Other sectors posted results that were more tepid. The Morningstar US Utilities Index lost 0.4% while the Morningstar US Consumer Defensive Index, Morningstar US Basic Materials Index, and Morningstar US Industrials Index each returned less than 5.0%. Bronze-rated strategies Virtus KAR Small-Cap Core (PKSFX) and Nationwide WCM Focused Small Cap (NWKEX) faced headwinds from their greater-than-30% allocations to industrials names. The funds finished in the bottom decile of their respective Morningstar Categories over both the second quarter and for the year to date. Neutral-rated Invesco Diversified Dividend’s (LCEAX) double-digit overweighting to both utilities and consumer defensive names weighed on its relative returns. The strategy’s new manager, Peter Santoro, came aboard in late March in preparation for longtime lead manager Meggan Walsh’s June 30 retirement. Santoro previously managed sector-neutral large-blend approach Columbia Select Large Cap Equity (CLEYX) and plans to reel in some of the larger sector bets on Invesco Diversified Dividend. 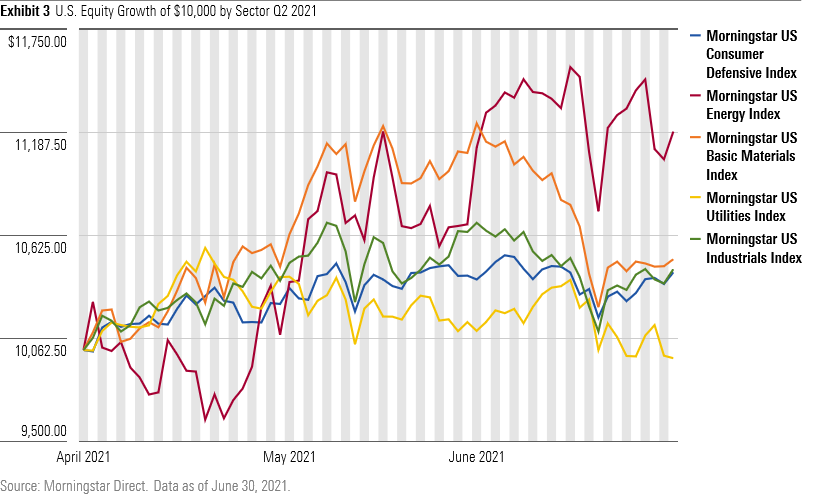 Claire Butz has a position in the following securities mentioned above: AAPL. Find out about Morningstar’s editorial policies.