Long-term mutual funds and exchange-traded funds collected $83 billion during May 2021, materially less than their $156 billion haul in March and $124 billion intake in April. Investors continued to favor passively managed strategies, pouring $71 billion into index-tracking funds. Broken down by investment type, ETFs--most of which are passively managed--gathered $64 billion, while open-end mutual funds pulled in about $19 billion. 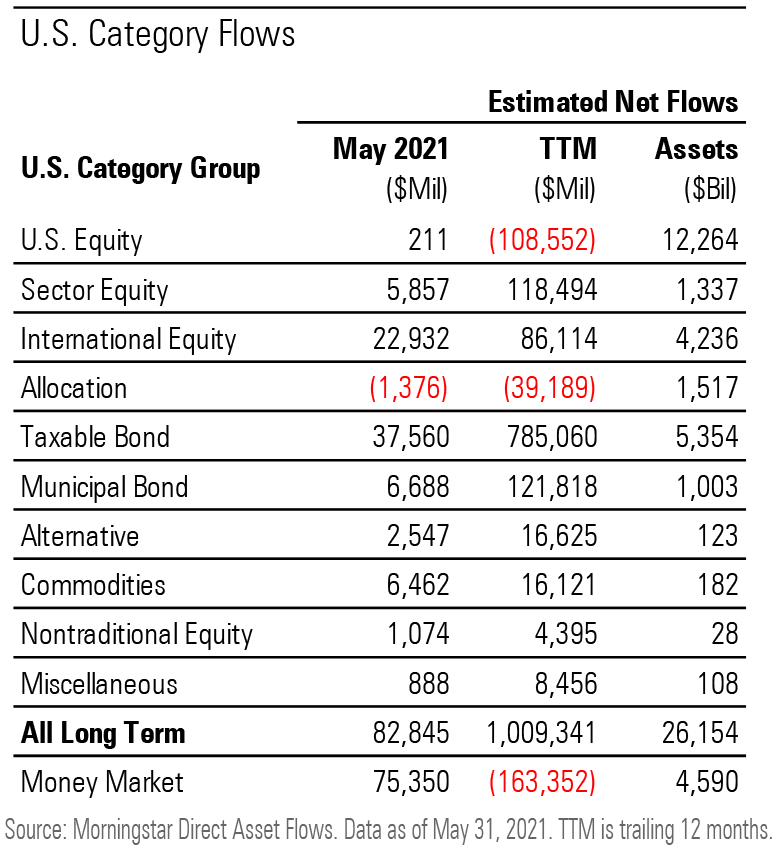 Bank-loan funds pulled in $3.7 billion, their sixth consecutive month of inflows after a long streak of outflows. Their year-to-date organic growth rate of 33% was easily the highest within the taxable-bond category group. As Morningstar recently detailed, bank-loan funds also provide investors protection in rising rate environments.

While the Federal Reserve has maintained the stance that heightened inflation is due to transitory factors associated with the economy reopening, fund flows may suggest that investors expect inflation to remain elevated and are seeking protection from this as well as potential interest-rate hikes.

After taking in a record $54 billion in March, U.S. equity fund flows were quiet for the second-consecutive month with just $211 million of inflows in May. Certain pockets within the category group, however, attracted heavy interest. Large-value funds picked up about $13 billion, their second-highest monthly intake in Morningstar's database, which goes back to 1993. Tellingly, their top monthly inflow of $20 billion occurred just two months prior in March, a sign of the market's newfound enthusiasm for cheaper, more cyclical stocks.

About 97% of large-value inflows accrued to passive strategies such as Vanguard Value Index (VIVAX), which brought in $2.3 billion, and Vanguard Russell 1000 Value Index (VRVIX), which gathered $1.0 billion. Mid-cap value funds also collected strong inflows in May, picking up $2.7 billion--their highest total since January 2004.

U.S. equity blend and growth categories didn't fare as well. While they gathered strong inflows in February and March, large-blend funds shed about $2.7 billion in May, and have now bled $53 billion over the prior 12 months. Large-growth funds shed $10.2 billion during the month, the steepest outflow within the category group. Their $88 billion of outflows over the prior one-year period was also the most within the group. Investors have been exiting large-growth funds consistently over the past decade, potentially rebalancing to asset classes that haven't performed as well.

International-equity funds collected $23 billion in May, the most of any equity category group. Contrary to U.S. equity funds, which shed $109 billion over the prior 12 months, they've gathered steady interest from investors and have experienced positive net flows in seven consecutive months. Including May's $5.8 billion inflow, diversified emerging-markets funds pulled in $42 billion for the year to date, the most of any category within the group.

Among the largest fund families, flows into passive strategies once again dwarfed assets collected by active offerings. Vanguard led the way, taking in over $33 billion; within this, close to $31 billion was collected by passive strategies, largely driven by flows into large-blend equity offerings. IShares saw the second-largest inflow, as the passives-focused firm collected nearly $14 billion, nearly all of which went into passive taxable-bond and international-equity offerings.

Fidelity's $9.6 billion of inflows for its passive offerings offset assets shed from its active funds. The opposite was true for SPDR State Street: Its passive lineup had outflows of roughly $150 million, while its active offerings collected more than $600 million. Active-focused American Funds held its own among its index-fund titan peers, collecting over $2 billion in May, primarily driven by flows into its U.S. and international-equity offerings.

Note: The figures in this report were compiled on June 12, 2021, and reflect only the funds that had reported net assets by that date. Morningstar Direct clients can download the full report here.