Does your portfolio have mutual funds that own fast-food or chain-restaurant stocks? How about paper products? Or food or snack companies? If it’s a broad-based stock index fund, the answer is almost certainly “yes.” And that means your portfolio includes companies potentially responsible in one way or another for one of the most pressing environmental calamities: deforestation.

In 2020, the World Wildlife Fund reported that the world lost 53% of forest wildlife between 1970 and 2018.  Last year, while attention was focused on the coronavirus pandemic, the world lost 12% more primary forest than it had the year before, according to the World Resources Institute. And the IPCC’s 2018 Special Report on Climate Change and Land points out that agriculture, forestry, and other types of land use account for 23% of human greenhouse gas emissions--a primary catalyst for climate change.

Much of global deforestation is commodity-driven, especially in South and Central America, Africa, and Southeast Asia. The loss of tropical forests has accelerated as global demand for soy, palm oil, and beef has grown. Demand for paper products, such as toilet paper, is driving boreal forest destruction further North.

The theme of Earth Day 2021 is Restore Our Earth™. It ushers in the start of the UN Decade on Ecosystem Restoration--to be launched on World Environment Day on June 5. Global initiatives to restore ecosystems and protect biodiversity move allocations of capital--investment dollars--into the spotlight.

As Earth Day approaches, we take a look at what investors can do, and what one investor is doing, to combat deforestation in global commodity supply chains.

Connecting the Dots on Deforestation

While many people know that deforestation is a serious issue for the environment, many don’t understand the corporate connections behind it. Companies sporting brands linked to agricultural commodities aren’t the ones operating the bulldozers or burning the forests. But they’re a critical link and it helps to know how the supply chain is structured.

Take palm oil: Plantations run by palm oil suppliers in Southeast Asia and Africa have decimated tropical forests and destroyed animal habitats. Palm-growing operations have also driven Indigenous people off their land and used forced and child labor. At source, the raw material has many attributes linked to its impact on people and ecosystems. But once it enters the global supply chain, it’s a commodity and virtually untraceable, presenting a huge challenge for companies at the top of the supply chain and for their investors.

This can be the case for companies based both inside and outside the regions in question. For example, U.S.-based agriculture company Archer-Daniels Midland (ADM) is an S&P 500 index fund holding and is held in funds run by American Funds and Wellington Capital Management. According to Sustainalytics, multiple observers “have highlighted deforestation in ADM’s palm oil supply chain, and a number of ADM’s suppliers (either direct or indirect) have been named in reports related to deforestation, habitat destruction, and peatland clearing and fires in Indonesia, Malaysia, and Papua New Guinea.” In addition, “ADM has been accused ... of purchasing soybeans of unregistered farms located in the Amazon, and ... being exposed to fires in its Brazilian supply chains. The company’s deforestation policy is considered weak and lacking in commitments.”

Then there are also the potential corporate consumers of the goods produced on deforested lands. They include some of the biggest fast food and restaurant chains, such as Domino's Pizza (DPZ) and Yum Brands (YUM) (KFC, Pizza Hut, Taco Bell).

Or take Procter & Gamble (PG). Green Century notes that P&G sources commodities from a global chain of enterprises that links it to the tropical forests of Southeast Asia via personal-care products and to the Boreal forest of Canada via toilet paper.

One important lever for changing corporate behavior is the corporate proxy ballot, where shareholders propose resolutions aimed at improving disclosures and changing company behaviors. Until recently, however, deforestation has failed to attract levels of support comparable with other broader environmental, social, and governance themes like diversity and climate risk. While support has been increasing in recent years, investors have tended to view deforestation as a stand-alone issue with no clear link to investment risk. 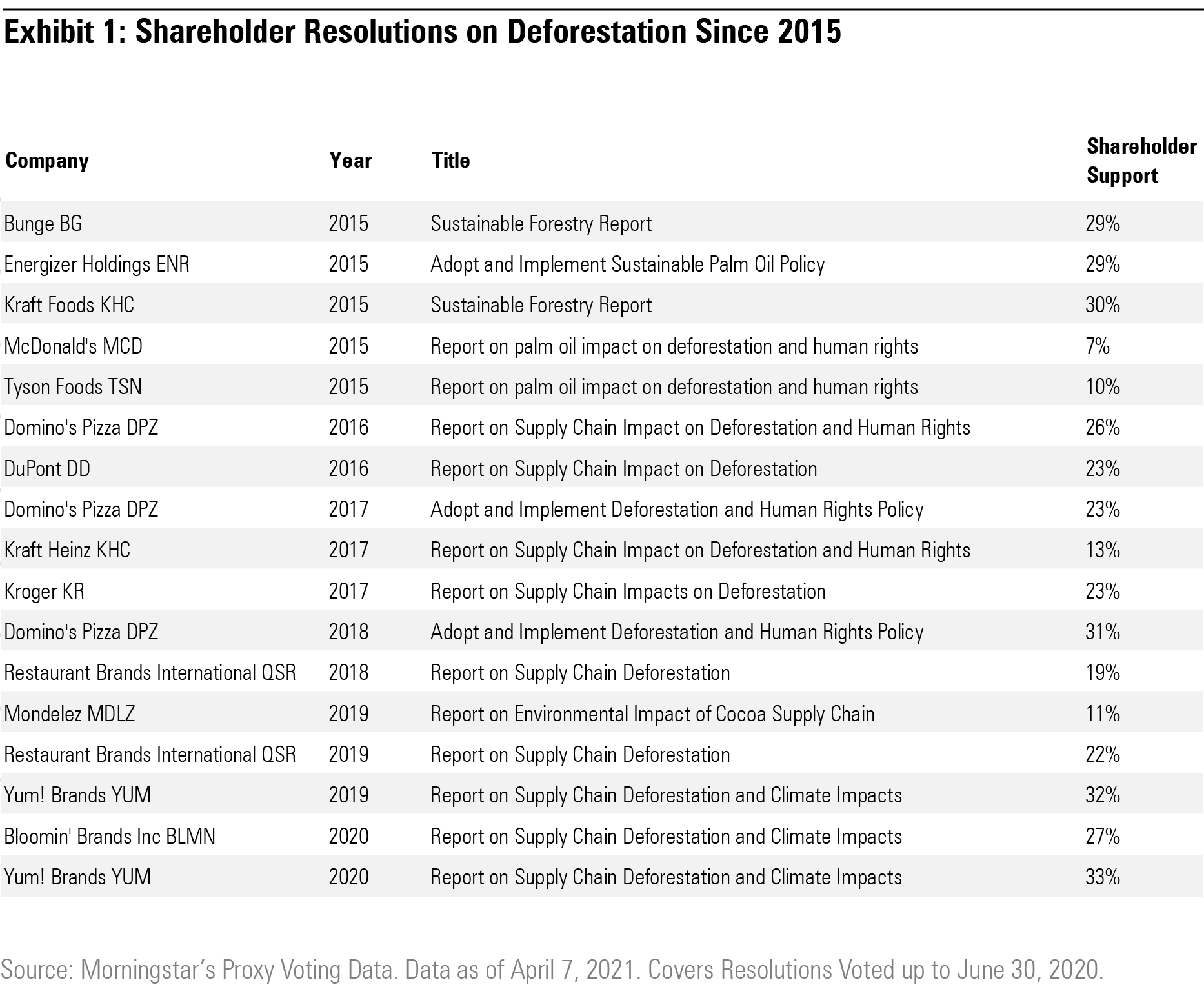 Friends of the Earth lays blame for weak corporate action at the door of the "Big Three" asset managers--Vanguard, BlackRock, and State Street--for not leveraging their combined $698 billion shareholding in consumer goods companies in their proxy-voting and engagement efforts.

Morningstar’s proxy-voting data shows that, except for State Street’s vote in support of the 2020 Bloomin Brands’ (BLMN) resolution, the three largest asset managers had otherwise failed to back any of the 17 measures listed in Exhibit 1.

In fact, even some of the largest ESG-branded funds voted down 2020 deforestation measures. 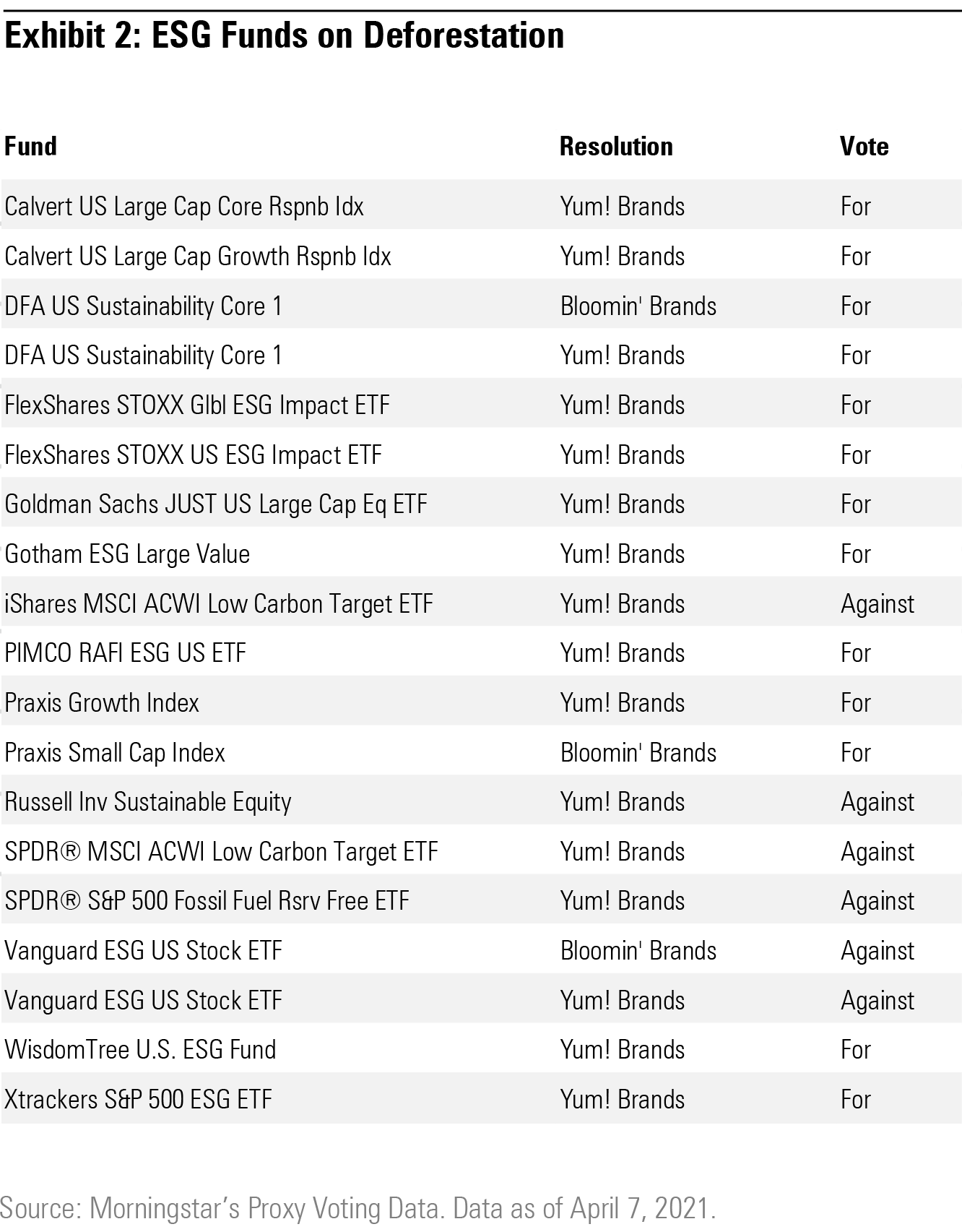 However, there are signs of a shift taking place.

Last year, Green Century proposed that P&G issue a report “assessing if and how it could increase the scale, pace, and rigor of its efforts to eliminate deforestation and the degradation of intact forests in its supply chains.”

Green Century was founded 30 years ago by a group of environmental and public health nonprofits and continues to be owned by these public interest research groups.  It is a unique model in asset management: All profits go to supporting the environmental and public health work of its nonprofit owners. This ownership structure gives Green Century a mandate to file shareholder resolutions, engage with companies, and advocate on policies.

Green Century also works to ensure that companies follow through on any commitments. In the case of deforestation, it does so by teaming with Rainforest Action Network, Friends of the Earth, and Chain Reaction.

Back in 2014, Green Century secured Kellogg’s (K) commitment to source 100% deforestation-free palm oil. The agreement was achieved by engaging with both Kellogg and with its Indonesian partner and primary palm oil supplier, Wilmar International (WLMIF), the largest palm oil processor in the world. So, when Wilmar committed to zero deforestation in growing and sourcing palm oil, it moved the industry.

Green Century filed at least six of the 17 deforestation resolutions voted since 2015 and filed several others that it withdrew before the vote. The asset manager uses resolution filing to open up and maintain a dialogue with companies in portfolios it manages--a strategy it credits with much of the progress it achieves. For instance, it filed resolutions at Tyson Foods (TSN) and Archer-Daniels Midland in 2020 and subsequently withdrew them when the companies agreed to provide shareholders with quantitative data on global supply chain deforestation impacts.

However, when it came to P&G, efforts to convince the company to take stronger action on its supply chain were unsuccessful, and so, in October 2020, Green Century asked shareholders to weigh in on its proposal.

Signs of a Shift

How did the "Big Three" vote? SEC-mandated vote record disclosures for meetings held after July 2020 will only be disclosed in August 2021. However, Vanguard, BlackRock, and State Street--P&G’s three largest institutional shareholders--have each disclosed that they supported this measure.

In a notable first, BlackRock put its hefty 6.7% stake in P&G behind the vote, stating in its early voting bulletin that “...the reputational and operational risks faced by companies being implicated in deforestation allegations is concerning to us.” Last month, BlackRock issued a stronger statement, singling out natural capital as an investment risk and deforestation as one of three areas it plans to focus on within this stewardship theme.

Vanguard funds, accounting for nearly 9% of P&G stock, also cast votes for the measure. On April 7, Vanguard published its 2020 Investment Stewardship Report. The report calls attention to P&G’s failure to achieve deforestation goals and to address human rights abuses in its palm oil supply as a source of reputational risk and competitive disadvantage for the company and its investors.

Deforestation on the Ballot in 2021

Ahead of the 2021 proxy season, which has just gotten underway, Green Century filed at least three more shareholder resolutions on deforestation. At Archer-Daniels Midland and Bunge, they raise the bar for commodity traders: asking them not only to strengthen supply chain policies, but also to work with others to support industry sourcing agreements to tackle deforestation and native vegetation clearance.

Further upstream, a first of its kind resolution asked JPMorgan Chase (JPM) to explain to shareholders “...how it could improve efforts to reduce negative impacts and enhance positive impacts on natural ecosystems and biodiversity across its banking and investment portfolios."

On April 8, Green Century announced that it was withdrawing this proposal after JPMorgan Chase agreed to “...[require] its grower/refiner clients in the palm oil sector to comply with “No Deforestation, No Peat, No Exploitation” (NDPE) sourcing practices; develop or expand its policies on forest-risk commodities, including for cattle, paper/pulp, and cocoa; and increase forest management requirements for its clients in the mining and infrastructure sectors.”

We believe this agreement is a sign of things to come and, combined with the vote on P&G’s deforestation resolution, points to a general shift in how investors view nature-related risk.

Globally, investors are mobilizing for nature. In the lead-up to the UN-brokered adoption of a global biodiversity framework, the Finance for Biodiversity Pledge was launched. Engagement on deforestation and other drivers of biodiversity loss is one of the commitments investment institutions make under this pledge. To pursue this, a subset of members formed a coalition aimed at leveraging their joint influence to engage companies on supply chain deforestation and enhancing supply chain transparency. And in January, a global investor collective formed the Natural Capital Investors’ Alliance, with plans to pioneer tools and best practice to scale natural capital investing impacts.

The risks to investors posed by deforestation transcend portfolios. Ecosystem restoration is a goal that will only be realized if investors work together and investors and governments pull in the same direction.

Jackie Cook does not own (actual or beneficial) shares in any of the securities mentioned above. Find out about Morningstar’s editorial policies.