The coronavirus pandemic has presented the biggest challenge for target-date strategies since the financial crisis of 2008. These strategies' performance rebounded sharply from the first-quarter bear market, but the fallout from the economic shock continued to weigh on investor contributions throughout the year.

We cover this slowdown in flows and other trends shaping target-date strategies in the recently published 2021 Target-Date Strategy Landscape. Morningstar Direct and Office clients can download the full report here.

Here, we'll take a closer look at our Morningstar Analyst Ratings for target-date mutual funds and highlight our top-rated series.

In November 2019, we enhanced the methodology that underpins our qualitative, forward-looking Morningstar Analyst Rating. The updated methodology applies to equity, fixed-income, and multi-asset strategies and should improve our ratings' effectiveness and usefulness to investors. More information can be found here, but the high level changes are:

The table below shows ratings assigned to the cheapest share class of the target-date fund series we cover, as of March 2021, along with the prospectus-adjusted expense ratio. It also highlights how the Analyst Rating, People Pillar, Process Pillar, and Parent Pillar changed between March 2020 and March 2021.

Overall, as you can see, three series' cheapest share classes were upgraded owing to higher conviction.

Only one series, TIAA-CREF Lifecycle, was downgraded, and this was due to our updated methodology. Our conviction in the series' management team and process hasn't changed, but under the new methodology it is tougher to earn our highest Analyst Rating given the low dispersion of returns among target-date funds and higher degrees of confidence in the teams and approaches at other series. 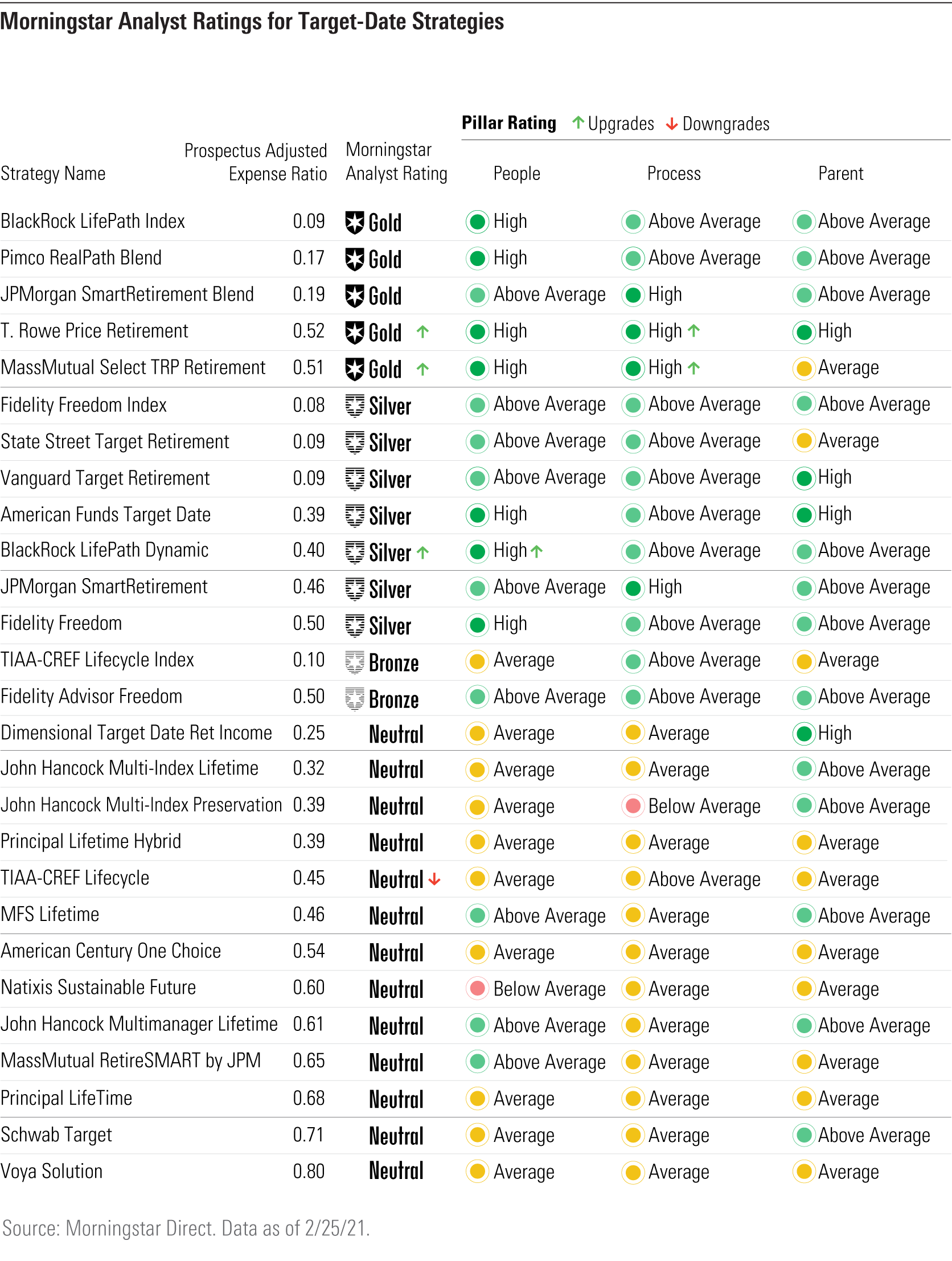 Series that newly qualify for a Morningstar Analyst Rating of Gold include:

Series That Continue to Set the Gold Standard

In December 2020, BlackRock announced that Matt O'Hara, co-head of its LifePath suite of target dates, had left the firm. O'Hara was a key figure in keeping BlackRock's target-date funds ahead of the curve. In 2014, he led the research that drove a revamping of the LifePath glide path. While O'Hara's departure is a loss, the remaining team has lost none of its intensive focus on research that will continue to improve the series. Chris Chung, head of asset allocation on the team since 2018 and a team member since 2008, replaced O'Hara as lead manager on BlackRock LifePath Index, and the firm further bolstered the team's resources by naming Partha Mamidipudi head of human capital research. He led research for the team until 2016 and rejoined from his role building customized portfolio-optimization tools for advisors on Aladdin. We remain confident in the team's capabilities.

At J.P. Morgan, Anne Lester stepped down as a portfolio manager for the JPMorgan SmartRetirement and JPMorgan SmartRetirement Blend series in April 2020, in anticipation of a move to focusing on national retirement policy. Lester had overseen this series as lead manager since its inception in 2006, and though she relinquished day-to-day responsibilities on the series in early 2019, Lester continued to influence the strategic direction of J.P. Morgan's target-date series. Lester pioneered innovative retirement plan participant research that meaningfully enhanced the series and raised the bar for target-date managers in general. Naturally, her departure was a loss for this series.

Encouragingly, Lester's longtime comanager and 20-year J.P. Morgan veteran Dan Oldroyd stepped up as this series' leader. Oldroyd's long history with the team and the series inspires confidence despite the abruptness of Lester's announcement. However, Oldroyd's research and portfolio-implementation responsibilities had already increased meaningfully in the wake of a previous portfolio manager shakeup in 2019. Now Oldroyd has taken on Lester's participant research duties, too, and must marshal the vast multi-asset resources that support the series. With Oldroyd alone at the helm, we downgraded the SmartRetirement and SmartRetirement Blend series' People Pillar to Above Average from High, but SmartRetirement Blend retained its Gold rating because of its low fees. SmartRetirement was downgraded to Silver.

For more about the trends driving today’s target-date strategies, download the full report. Get My Copy

Jason Kephart does not own (actual or beneficial) shares in any of the securities mentioned above. Find out about Morningstar’s editorial policies.