Rising interest rates and a swing in equity market leadership during February seemed to invigorate investors rather than scare them off. Long-term mutual funds and exchange-traded funds took in a record $144 billion in February, surpassing the previous mark of $132 billion set in January 2018. ETFs collected roughly $92 billion, driven by a move into passive equity funds, while open-end funds took in $53 billion, led by flows into actively managed fixed-income strategies. 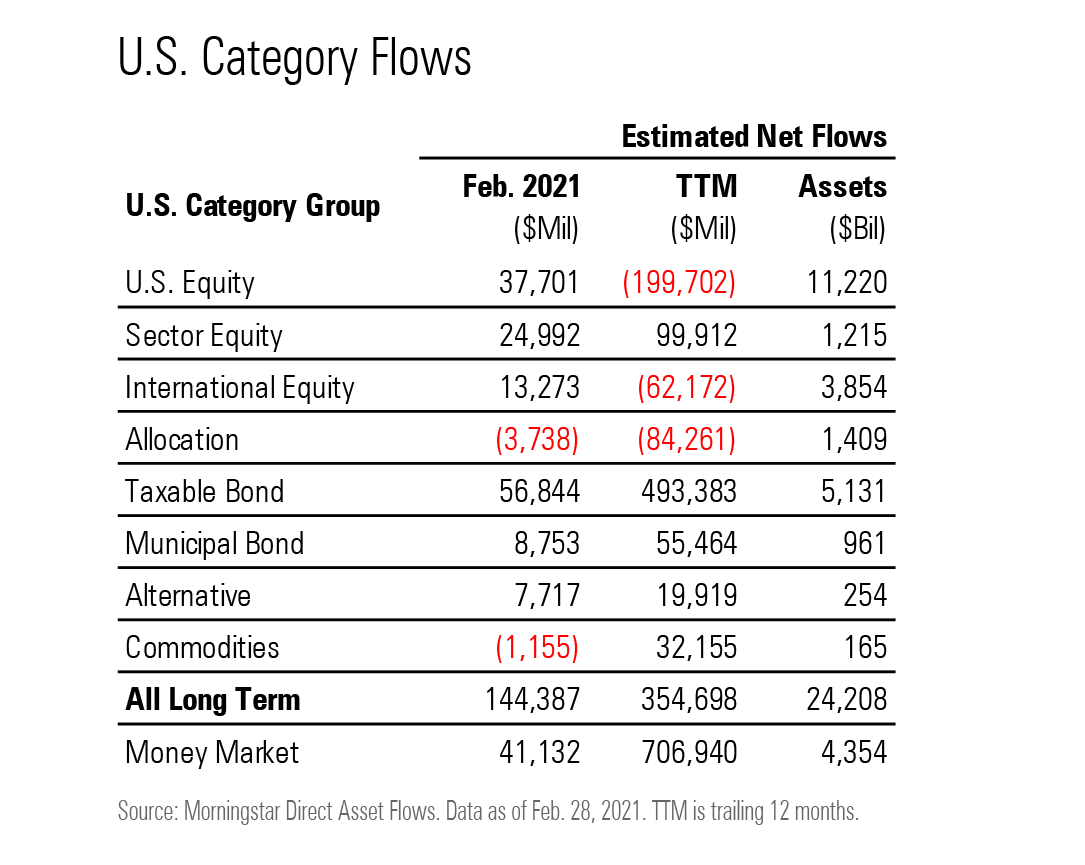 Money flowed into Morningstar Categories that might weather an inflationary environment better than most, such as commodities broad basket and inflation-protected bonds. Prospects of a new federal stimulus package along with lower coronavirus case counts likely spurred optimism about future economic activity while sparking concerns about higher inflation.

U.S. equity funds gathered a record $38 billion after investors redeemed nearly that same amount in January. Despite the wave of interest, all the inflows accrued to passive strategies; in contrast, actively managed U.S. equity funds shed nearly $3 billion. February's inflows for the category group are still a blip relative to the $228 billion of outflows over the trailing 12 months, but they may be a sign that investors aren't shying away from equities despite markets nearing all-time highs.

International-equity funds took in about $13 billion in February, their fourth consecutive month of inflows. The group's second-largest category by total assets, diversified emerging markets, gathered the largest inflows at about $6.5 billion. 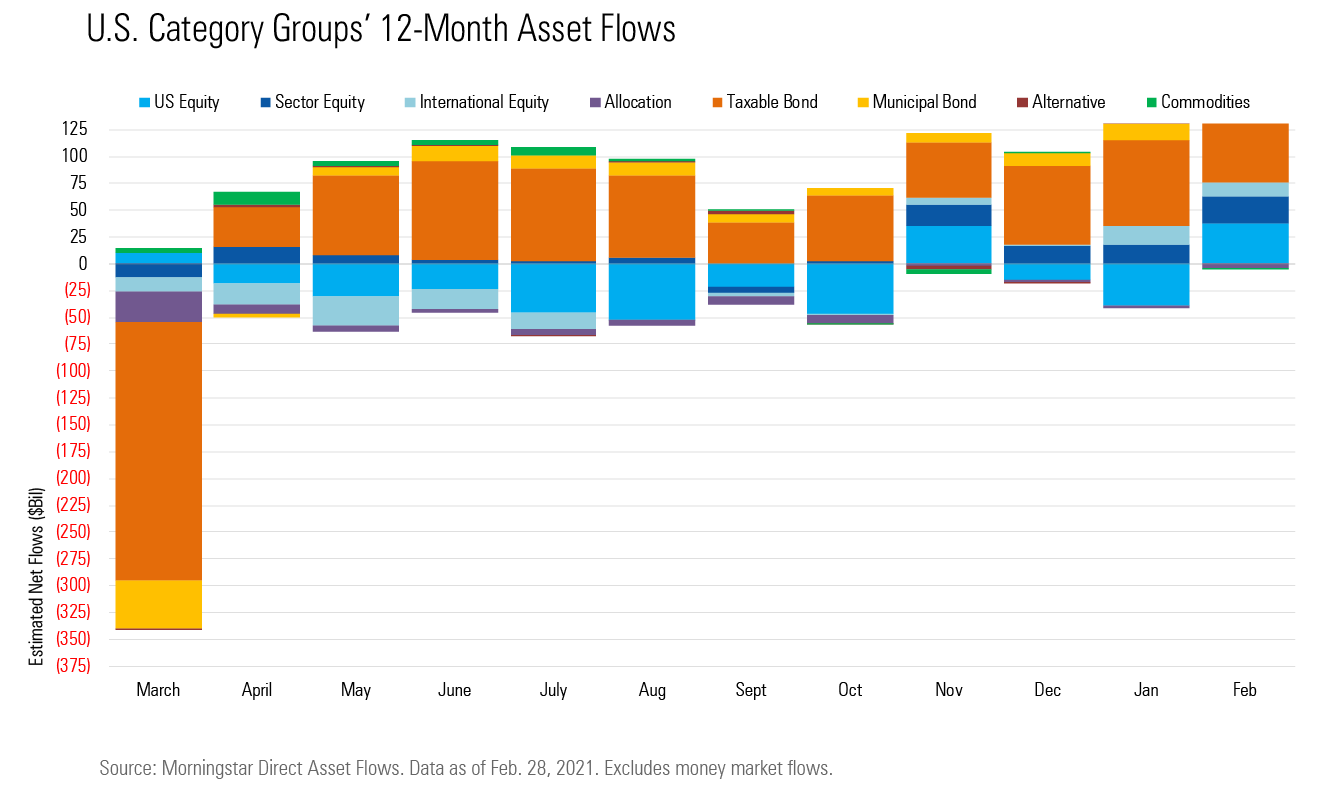 Taxable bond funds continued their run of inflows, gathering $57 billion for the month, bringing their total over the trailing 12 months to $493 billion, the most by far for any group. While rising interest rates led to negative performance for major bond-market benchmarks such as the Bloomberg Barclays U.S. Aggregate Bond Index through the first two months of the year, investors didn't shy away from the asset class and may still be using it to rebalance away from a red-hot equity market.

They appear to be tailoring their allocations, however. Lower-duration categories (that is, funds with fixed-income investments that are less sensitive to rising interest rates) attracted the most assets. Intermediate core bond funds took in the largest total within the category group, collecting $18 billion, followed by short-term bond funds’ $11.6 billion intake. 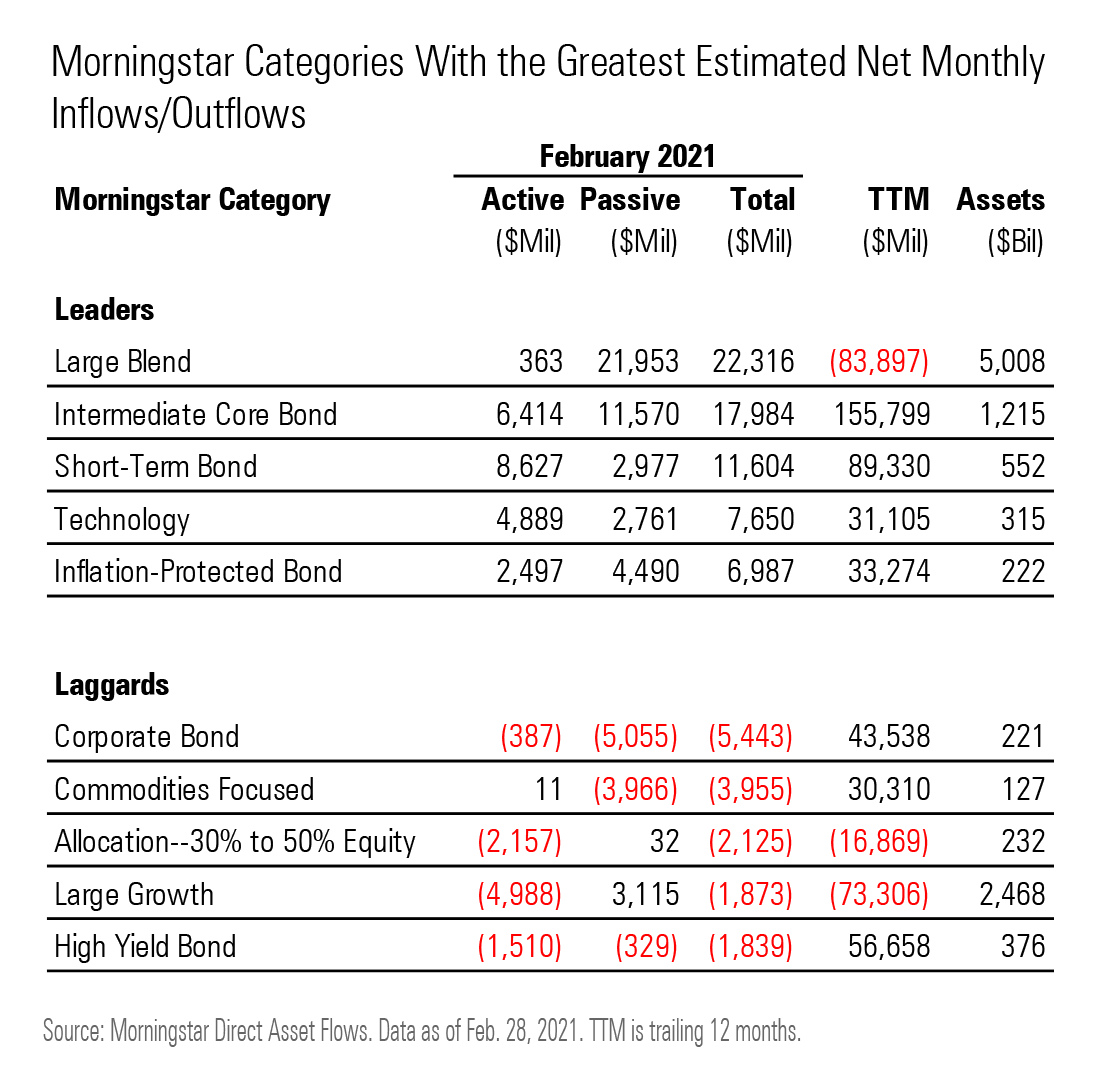 Following a rough stretch in terms of performance and outflows, value-oriented equity funds may finally be seeing some reversion. U.S. value stocks have outperformed growth stocks through the first two months of the year, and investors seem to be embracing the shift. Large-cap value funds took in $5 billion in February, the most since 2013. While mid-cap value funds took in just $200 million, that broke a streak of 43 straight months of outflows dating back to June 2017.

With strong flows into passively managed equity strategies, it comes as no surprise that index-fund titans Vanguard and iShares took in the most and third-most among the largest asset managers. Vanguard pulled in roughly $37 billion, of which $34 billion went to passive strategies, while iShares' funds raked in $16 billion. 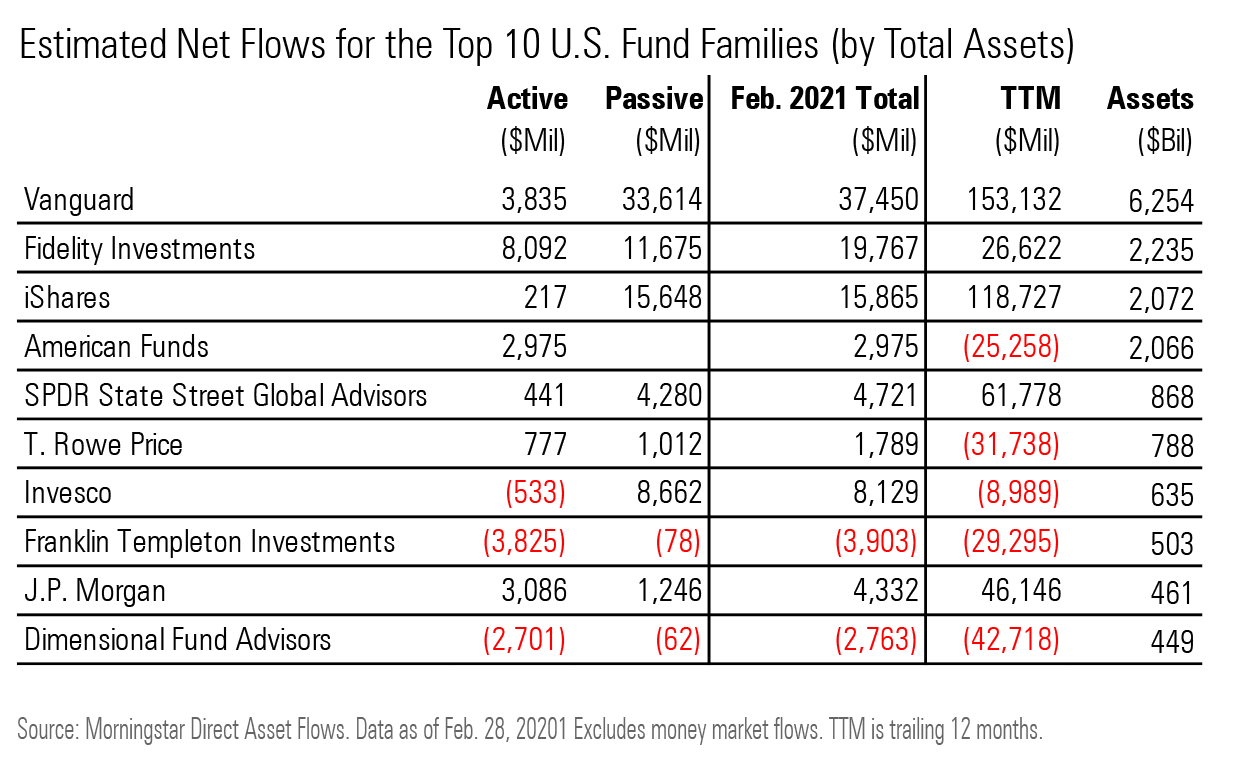 While it's not one of the largest fund family in terms assets under management, ARK ETF Trust is reaping flows at a remarkable pace. The advisor of a suite of mostly actively managed ETFs has seen its asset base grow from a humble $3.2 billion on Dec. 31, 2019 to $51 billion at the end of February 2021. While strong gains across its aggressive, high-growth equity offerings account for a meaningful portion of this growth, it also took in more than $36 billion of new assets over the prior 12 months, for an astounding 1,024% organic growth rate. It pulled in $8 billion in February alone, the fifth highest total of any fund family.

Note: The figures in this report were compiled on March 10, 2021, and reflect only the funds that had reported net assets by that date. Artisan had not reported. Morningstar Direct clients can download the full report here.