Bon Mots The news that Tesla (TSLA) will soon be entering the S&P 500 left me triply entertained.

First, I had not realized that Tesla was not already in the index. Perhaps there is a reason that my columns are free. Second, the announcement served as a reminder that the S&P 500 is a strange construction, being neither a pure representation of the largest U.S. stocks nor a “strategic-beta” benchmark that aims to outgain the norm. It is mostly the former, with a splash of the latter.

Third, Tesla’s stock immediately jumped 13%, which makes no sense, because Standard & Poor’s decision was inevitable. If not this month, then next month. Even if membership in the S&P 500 confers permanent value--which is questionable--that action should already have been baked into Tesla’s quote. But I suppose that even finance professors don’t believe that Tesla is efficiently priced.

Larger at the Top The addition will increase the S&P 500’s concentration, which is saying a great deal, because the index currently is more top-heavy than at any other time during the past 25 years. Usually, the S&P 500’s Top 10 holdings make up about 20% of the index’s total assets. That figure has expanded sharply over the past 18 months, reaching 28% in June. Since then, the Top 10 holdings have further surged. Counting Tesla’s addition, they now account for 34% of the index. 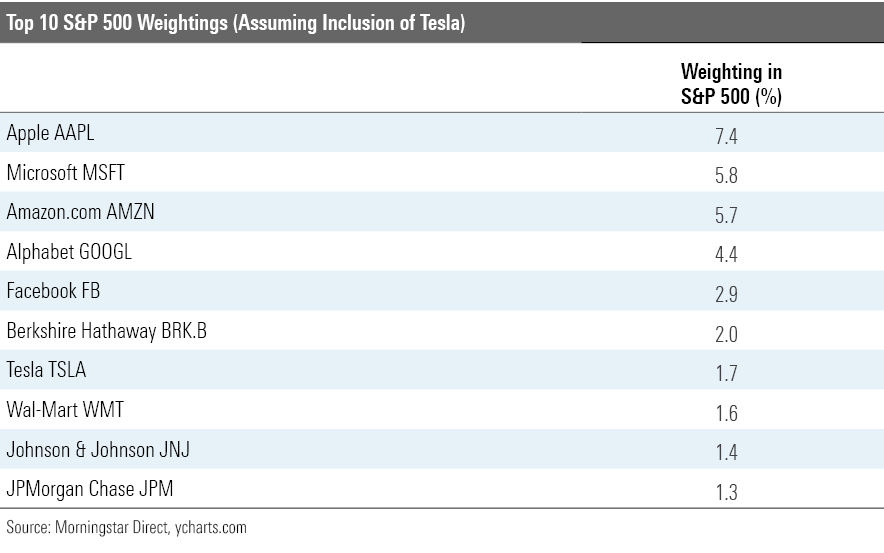 As indicated by the chart, most of the growth in the Top 10’s influence comes from strong performance from index leaders Apple (AAPL), Amazon.com (AMZN), Alphabet (GOOGL), and Facebook (FB), rather than from the addition of Tesla. That said, by displacing Procter & Gamble (PG) from the Top 10 list, Tesla will add another half point to the Top 10’s weighting. Another step in the ongoing process.

For several years, market observers have complained that the S&P 500 is dominated by a few giant holdings, but until recently such complaints were largely unfounded. From 2016 through 2018, when such comments started to become commonplace, the percentage of index assets occupied by the S&P 500’s Top 10 continued to hover near 20%. They have increased only recently.

However, the argument certainly applies today. At one third of the S&P 500, the Top 10 positions truly can drive the index’s results. (I would write that the tail now wags the dog, but since these companies are leaders rather than followers, a more apt analogy is that the nose walks the dog.) That condition has benefited S&P 500 index-fund shareholders in 2020. Whether it will continue to do so is, of course, another matter entirely.

Nowhere to Run Switching from the S&P 500 to a fund based on a broader index ameliorates the issue, but it does not eliminate it. As the S&P 500 accounts for three fourths of the value of publicly traded U.S. companies, those same Top 10 firms account for roughly 25% of the Wilshire 5000, or any other index that attempts to capture the entire American stock market. The condition cannot be escaped by purchasing, say, Vanguard Total Stock Market ETF (VTI) instead of Vanguard 500 Index (VFINX).

None of this would matter if the index’s biggest companies operated in unrelated businesses. If, for example, one firm was the world’s largest food manufacturer, another a multinational bank, a third a pharmaceuticals giant, and a fourth the dominant chip manufacturer, then the index’s top positions would be diversified. To be sure, they would all fall together during a global stock-market decline, but so would the rest of the S&P 500. Concentration would pose no extra danger.

That is not the case, however. Although Apple, Microsoft (MSFT), Amazon, Alphabet, Facebook, and Tesla would seem at first glance to occupy different industries, from building smartphones to installing software to delivering packages to manufacturing automobiles, in reality their stock-market valuations all depend upon two features: 1) preserving their semi-monopolies and 2) extending their technological advantages. They rise and fall on the same investment waves.

Buyer Beware This same argument, of course, applied to tech stocks in the late 1990s, which initially appreciated in unison, and then collapsed as a unit. However, the comparison ultimately fails, because the current version of the S&P 500 is much more concentrated than its predecessor. In summer 1999, four youngish companies (Microsoft, Cisco (CSCO), Lucent, and Intel (INTC)) qualified for the S&P 500’s Top 10. Collectively, they accounted for 11% of the index’s total assets. In contrast, the Sainted Six now make up 28% of the index. (Or 22%, if we eliminate Microsoft from the list, on the grounds that it has graduated to middle age.)

This column is couched with warnings: The possibility exists that what has occurred will reverse, thereby delivering losses to S&P 500 investors, even as most of their holdings appreciate. The caution is appropriate. Investors should realize that S&P 500 index funds have entered unchartered territory. Their key characteristics have changed dramatically over the past few years. What’s more, the last time the index exhibited such behavior, even faintly, that dance ended badly.

Also, the Sainted Six’s allocation punches above its weight. Aside from Tesla, these companies are consistently profitable; the health of their businesses is not in question. However, high investor expectations, along with the uncertainty associated with technology operations, make their stocks volatile. In practice, that 28% weighting sometimes moves so sharply as to dominate the proceedings.

None of this is to argue against owning an S&P 500 fund or other market-cap-weighted investment. Strong companies justifiably earn high valuations, and unless those prices are so steep as to be clearly ridiculous--which, in my view, they are not--it’s unwise to challenge the wisdom of the crowd. Just recognize that the index has changed: It is riskier today than in years past.

John Rekenthaler (john.rekenthaler@morningstar.com) has been researching the fund industry since 1988. He is now a columnist for Morningstar.com and a member of Morningstar's investment research department. John is quick to point out that while Morningstar typically agrees with the views of the Rekenthaler Report, his views are his own.

John Rekenthaler has a position in the following securities mentioned above: VTI. Find out about Morningstar’s editorial policies.