This certainly sounds like a description of 2020. But this same scenario played out in 2016. After Donald Trump’s victory over Hilary Clinton, value stocks and smaller caps went on a tear. Then the rally fizzled, and large growth resumed its ascendancy.

Could the 2020 rotation be similarly short-lived? The historical gyrations of Morningstar’s style indexes are worth examining, though my colleague David Sekera presents a strong argument for why this time is different.

Whether this trend reversal continues, of course, only time will tell. But it’s worth comparing the dynamics of then and now.

The 2016 Post-Election Whipsaw   By the time the 2016 election arrived, large-growth stocks had been on top for years. The FANG acronym, for market leaders Facebook (FB), Amazon.com (AMZN), Netflix (NFLX), and Google (GOOGL), was popularized in 2013. At the time, I wrote that the long-running popularity of growth over value and large over small “reflected a risk-averse, weak economic environment where investors favored established companies possessing secular growth drivers.” My colleague John Rekenthaler invoked income inequality to explain the strength of large-cap growth stocks.

Then came the “Trump Bump.” The new president had campaigned on tax cuts, regulatory rollbacks, infrastructure spending, a protectionist trade policy, and economic growth above 4% (the U.S. economy never grew more than 3% per year during the Obama years). Meanwhile, Trump’s relationship with the technology sector was uneasy. The market initially interpreted the 2016 election results as a boon for economically sensitive, domestically oriented companies in sectors like energy, basic materials, and financial services. Stocks like U.S. Steel (X) soared while big tech retreated. In what was referred to as a “post-election whipsaw,” the Morningstar Small Value Index paced the market. 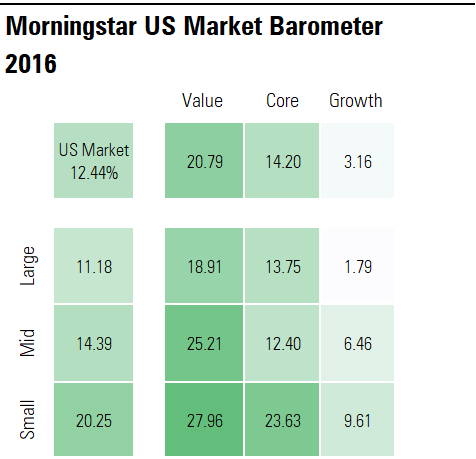 But the market quickly rotated back again. Expectations for the Trump presidency reset as parts of his agenda, such as infrastructure spending, failed to advance. Large growth resumed its dominance of the Morningstar Market Barometer in 2017 and beyond, thanks in no small part to the FAANG stocks (The acronym expanded to include Apple (AAPL)). 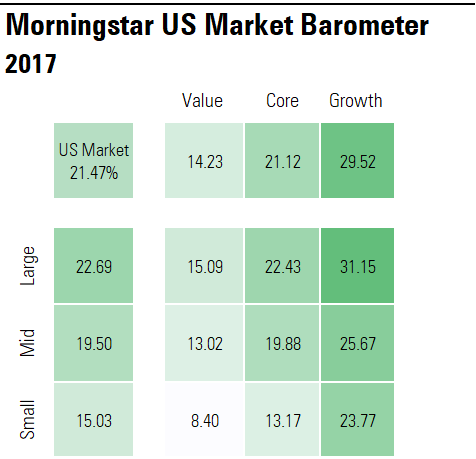 2020: FAAGM vs. BEACH The coronavirus pandemic of 2020 only amplified large-growth’s primacy. The evolving acronym of market leaders (which sometimes swapped out Netflix for Microsoft (MSFT) to become FAAGM) only benefited from the trends accelerated by the pandemic. Society has become wholly reliant on technology for work, school, and shopping.

Meanwhile, 2020’s economic losers seemed to cluster on the value side of the Morningstar Style Box and lower down the capitalization spectrum. The energy sector has been hit by falling demand. Banks battle low interest rates and loan losses. Real estate has suffered the effects of societal shutdowns. A new acronym, BEACH, was coined for the market’s pandemic victims--booking, entertainment, airlines, cruises, and hotels. As a result, the gap between growth and value for the first three quarters of 2020 was the largest since the dot-com bubble peak in 1999. 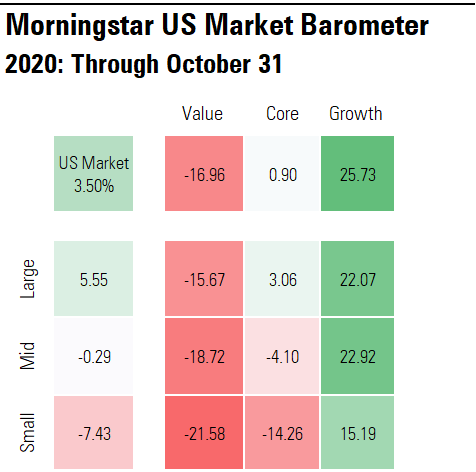 Then came the week of Nov. 9. In what my colleague Russ Kinnel called “a dramatic reversal in the market,” small-value stocks skyrocketed. Again, the market is expecting stimulus from a new administration--the so-called “reflation trade.” But it’s not just about the election this time. Pfizer (PFE) unveiled highly encouraging results for its COVID-19 vaccine, raising hopes of the pandemic’s end. Not only did Pfizer, the fifth largest constituent of the Morningstar US Value Index, take off, but so did the shares of many economically sensitive companies. Then Moderna (MRNA) announced successful vaccine results one week after Pfizer. 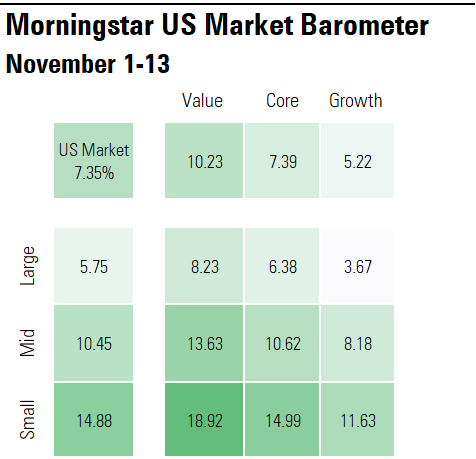 The market expects the BEACH stocks to be released from their pandemic hell. But will this be a more enduring cycle than in 2016?

In favor of a sustained shift are real fundamental drivers, including a strong forecast for U.S. economic recovery that doesn’t depend on the enactment of a policy agenda. Furthermore, equity valuations support serious upside among value stocks and smaller caps. According to Sekera’s analysis, two thirds of the stocks viewed as undervalued by Morningstar equity analysts as of Nov. 9 fall in the small-value, mid-value, or large-value segments of the market. The energy, consumer cyclical, and real estate sectors were viewed as rich with opportunity. On the flip side, large growth looks overvalued.

Of course, market inflection points are only obvious in retrospect. Value stocks have appeared undervalued for years. But as the 2020 whipsaw has demonstrated, markets can turn suddenly and sharply. It seems highly unlikely that the Morningstar Market Barometer of 2025 will show another long bull market for large-growth stocks.

Dan Lefkovitz does not own (actual or beneficial) shares in any of the securities mentioned above. Find out about Morningstar’s editorial policies.