What could happen to U.S. equities overall after the election? In order to answer this question, we first take a closer look at the drivers of stock market performance in the last several years. The chart below shows cumulative growth in the S&P 500 market capitalization split into key drivers. The S&P 500 market capitalization is the product of 1) U.S. gross domestic product, 2) the ratio of pretax profits to GDP, 3) the corporate tax rate, and 4) the P/E multiple.

The stock market took off following the election of Donald Trump in November 2016. Altogether, the S&P 500 was up 58% by year-end 2019 versus year-end 2015 levels. This actually was not an extraordinary amount of price appreciation compared with the prior four years (which delivered 63% in cumulative returns). Still, prior to the 2016 election, many investors were wondering how much room was left for stock market gains. This was especially the case given that in the years prior the election, much of the gains were driven by multiple expansion (as shown in the chart below), which cannot continue indefinitely.

Could a Trump defeat lead to an unwind of the tremendous equity gains in the past four years? By and large, we don't think so. The chart below shows that the main drivers of equity performance from 2016 to 2019 were continued GDP growth, a rebound in the ratio of pretax profits to GDP, and a decrease in the corporate tax rate. Only the last factor was driven directly by Trump's election, as the 2017 Tax Cuts and Jobs Act led to a cut in the U.S. statutory tax rate to 21% from 35% previously. This caused the average effective tax rate on S&P 500 companies to fall to 18% from 28%, according to S&P. 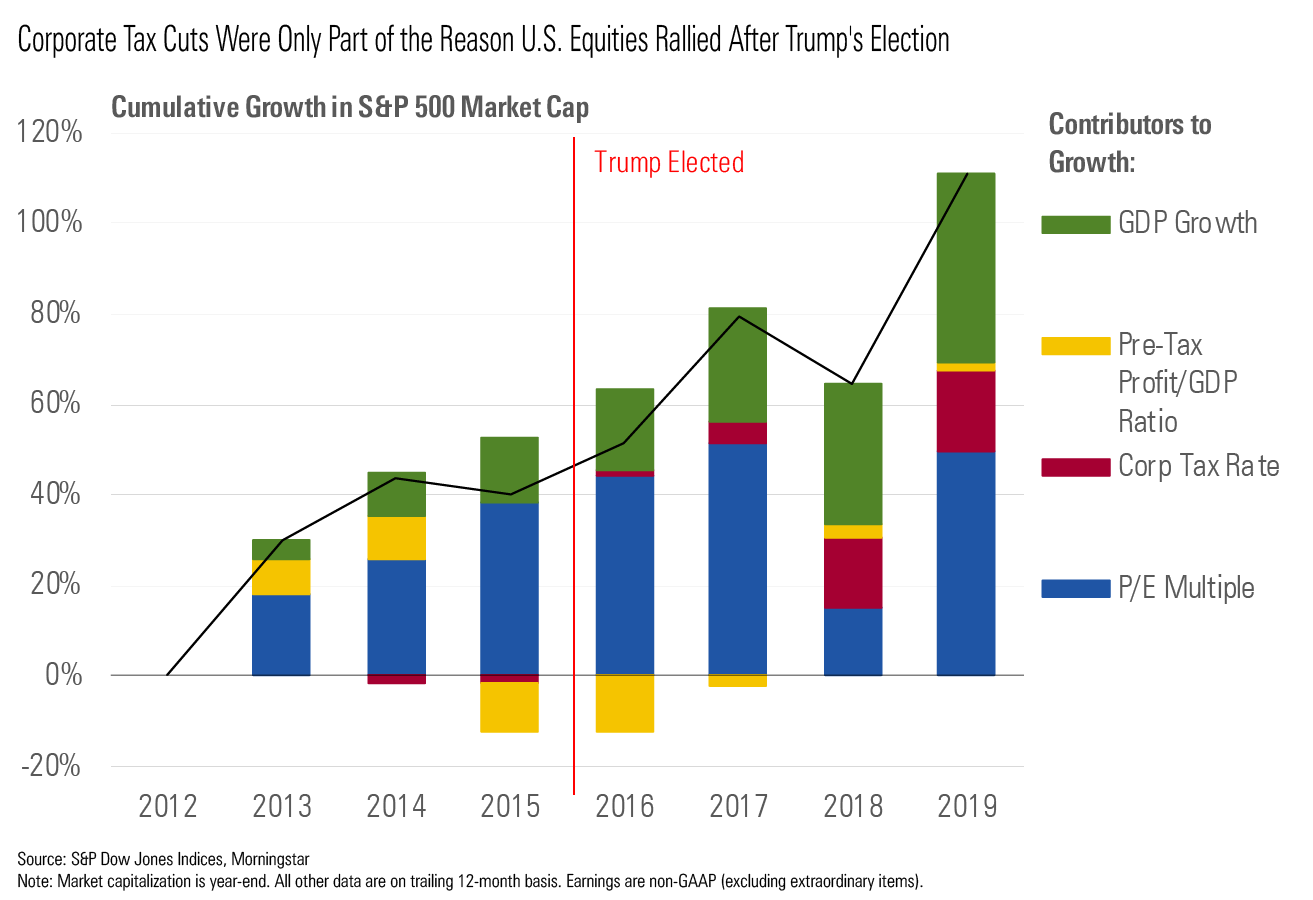 Certainly, Biden's plans to raise corporate taxes will have some negative impact on U.S. equities overall if enacted. By reducing the effective tax rate by 1,000 basis points, Trump's corporate tax cuts increased aftertax earnings on the S&P 500 by 14% overall. A reversal of those tax cuts should lead to a reduction in average aftertax earnings by a similar magnitude.

In the event that the Democrats capture a large Senate majority (five-plus seats), we think the scale of the corporate tax increase could be quite large. In this scenario, our back-of-the envelope analysis suggests a hit to average equity valuations on the order of 10%. Biden plans on upping the statutory rate to 28% from 21% and implementing new measures to increase taxes on companies located in offshore tax-havens. We expect the ratio of corporate taxes to U.S. GDP to increase by about 60 basis points by 2025, whereas this ratio fell about 80 basis points following the corporate tax cuts of the Tax Cuts and Jobs Act. This suggests that 75% (dividing 60/80) of the recent fall in effective tax rates will reverse. Effective tax rates fell by 1,000 basis points (18% from 28%), so a 75% rebound would be 750 basis points (25.5% from 18%). All else held equal, this should reduce aftertax earnings by 9% (= (1-.255)/(1-.18) -1). Average U.S. equity valuations should fall by just shy of that 9%.

With that said, we wouldn't expect equities to fall by 9% on the day after the election if the Democrats achieve a clean sweep. First, some of the tax hike is probably baked into equities at the moment. More important, it's likely that the tax increase would be smaller if the Democrats capture a smaller majority than the five-plus seat scenario discussed above. In particular, implementing the measures to crackdown on offshore tax-havens presents some thorny issues that a slim majority could be unable to resolve. If we were only to see an increase in the statutory rate to 28% from 21% but no other measures, that would likely translate into about a 500-basis-point increase to effective tax rates. In turn, that would reduce aftertax earnings by only about 6%.